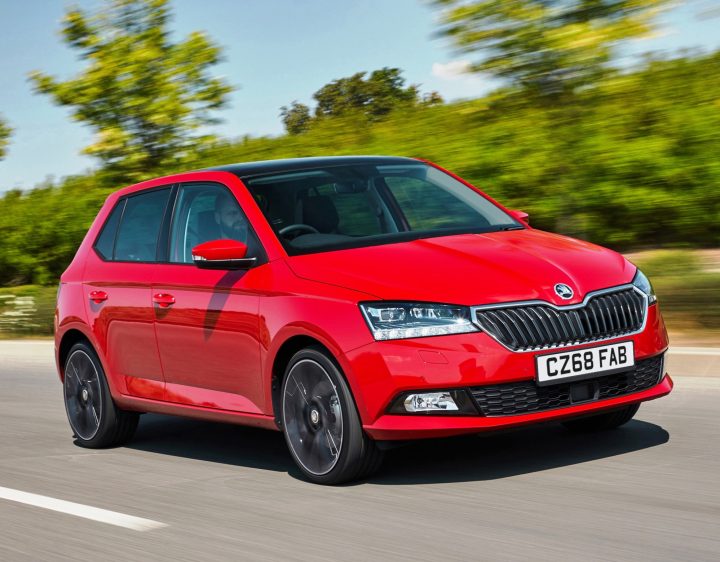 To coincide with the launch of the revised Fabia ‘superminis’, Skoda UK commissioned 2016 Great British Bake Off winner Candice Brown to produce a small-scale version of the iconic Fabia cake which starred in the hit 2007 TV advert which was nearly four metres long and one-and-a-half metres high.

But the new cake reflects a slimmer market in today’s world of falling new car sales and we wonder if it’s going to be a ‘piece of cake’ for Skoda to maintain the Fabia’s appeal and popularity, asks David Miles.

The Czech Skoda brand was founded in 1895 making it one of the World’s oldest manufacturers. New ingredients were added in 1991 when it became a member of the Volkswagen Group and the icing came in 2017 when Skoda delivered 1.2-million new vehicles to global customers in over 100 countries giving it four consecutive record years of sales growth.

It operates at three locations in the Czech Republic, it manufactures in China, Russia, Slovakia, Algeria and India mainly through Group partnerships as well as in Ukraine and Kazakhstan with local partners and Skoda employs over 35,000 people globally.

Currently the brand offers eight passenger-car ranges; the Citigo, Fabia, Rapid, Octavia, Karoq, Kodiaq, Superb and the Kamiq in China. Skoda is now introducing higher specification Sportline derivatives to their Superb Hatch and Estate models and the Kodiaq large SUV. In 2019 the brand will add the Kodiaq vRS, a mid-sized Hatch range to replace the Rapid models, the Superb range will receive a facelift, the Superb Hybrid models will be added to the line-up, a small SUV codenamed Vision X will join the line-up and in 2020 Vision E electric models will join the range.

Over 4.2million Fabias have been sold worldwide since the first generation appeared in 1999 and in the UK 19,000 were sold last year. In the UK consecutive years of record Skoda sales overall saw 80,056 units registered last year and so far this year 58,105 new Skodas have been sold with the brand on target to achieve around 80,000 total sales. The UK is Skoda’s third largest European market for sales and it has 130 UK dealerships and a further 21authorisedrepairers. 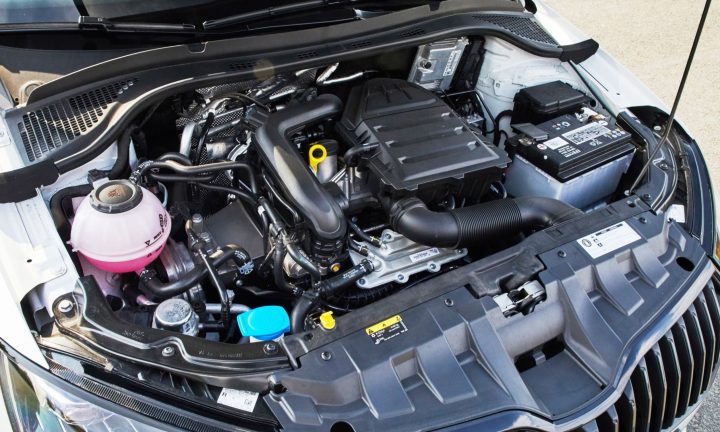 A 7-speed DSG automatic transmission option is available for the TSI 110hp engine in addition to the choice of a 6-speed manual gearbox.  All other engines have 5-speed manual gearboxes. There is no diesel engine option for the revamped range as demand in the UK is very low and no vRS high performance model is planned.

Because the updated Skoda Hatch and Estate car range is mid-way through its life cycle it doesn’t gain the VW Group’s latest MQB platform which has given the all-new generation VW Polo and SEAT Ibiza supermini models significant improvements in interior space. The Fabia retains the older PQ25 platform but it does use some of the MQB’s technology and specification to improve safety in addition to having higher levels of specification. All these improvements add up to an average £525 price increase across the range. The third generation Fabia was noted for its roomy rear interior space and in those areas it still out performs all but the Polo and Ibiza models. Other competitors are the new Ford Fiesta, the new Citroen C3, Hyundai i20 and older Vauxhall Corsa. 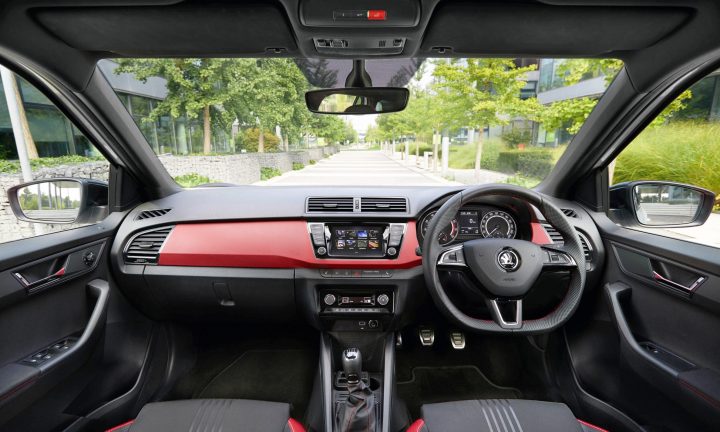 The interior has received a general upgrading of materials plus new instrument layout and the 6.5-inch touchscreen with Smartlink supports Apple CarPlay, Android Auto and MirrorLink connectivity and support systems. Although the touchscreen is larger it still looks ‘old school’ compared with the latest competitor models.

DAB radio and Bluetooth connectivity are standard but for most versions a mobile phone must be used for navigation unless you upgrade to the £570 Amundsen touchscreen navigation system. 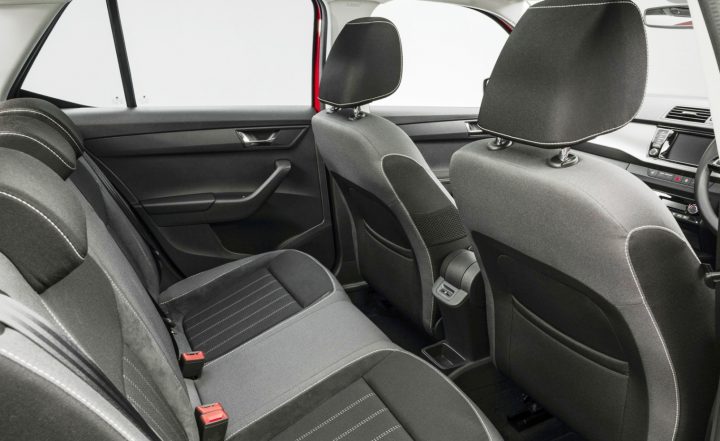 Manufacturers like to showcase extra cost options on their test cars at media launches and my £14,845 SE model actually had over £4k’s worth of options added. The highest cost items were the £570 integrated sat-nav system,  £960 full LED headlights with adaptive front light system and cornering fog lights, £295 acoustic front and rear parking sensors, adaptive cruise control at £380, climate control air-con at £305, electric rear windows at £165 plus many more smaller costs items.

One of the previous appealing features about the Fabia Hatch was the interior space it offered in its sector and that still remains the case apart from the new generation larger Polo and Ibiza models. 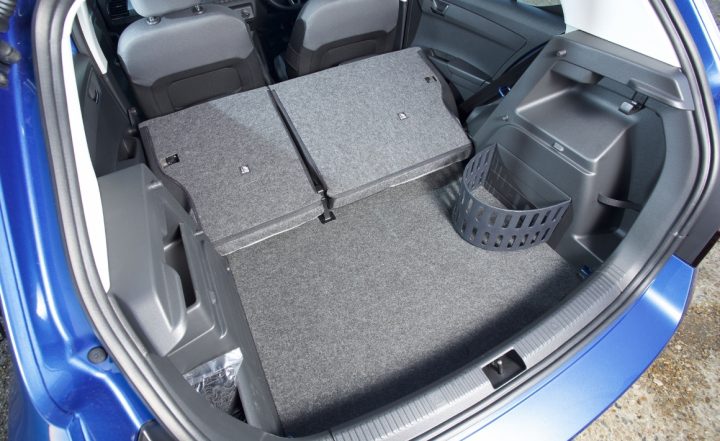 At 3,997mm in length with a wheelbase of 2,470mm it still provides comfortable accommodation for up to five passengers and it still has one of the largest boots in its sector with 330-littres of space and this can be increased to 1,150-litre with the rear seatbacks folded down.

The Estate at 4,262mm in length offers 550-litres of load space with the rear seats in position and 1,395-litres with the seats folded down.

The older PQ25 platform still provides for agile and precise handling and the ride remains noticeable compliant and comfortable aided by the sensibly sized 15-inch wheels with those bump cushioning high walled tyres.

The 1.0-litre TSI 3-cylinder turbocharged petrol engine with the 95hp output remains the sensible choice and is the most popular. It’s responsive with 160Nm of torque available from 1,800rpm so it performs adequately enough for docile in-town travel or on more open roads. 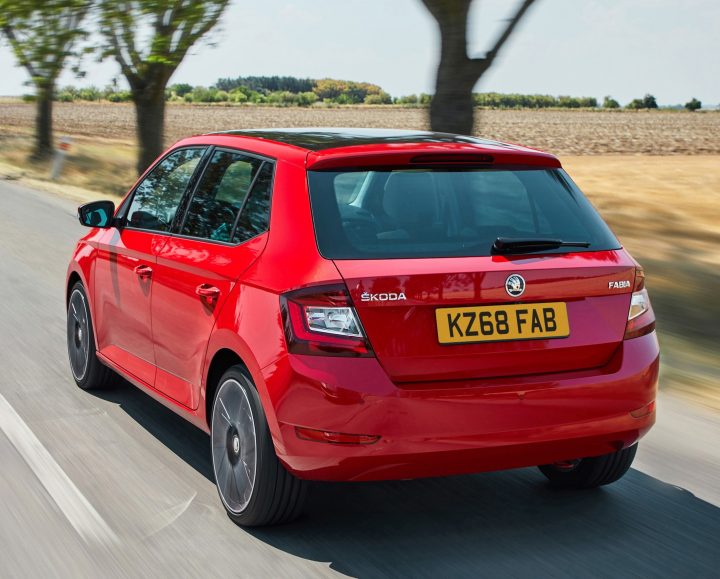 Along the winding Berkshire lances around the media launch venue it proved very responsive with wide torque band of up to 3,500rpm minimizing the effect of only having a 5-speed gearbox for frequen gearchganges. The updated and refreshed Skoda Fabia Hatch has all the ingredients to continue its UK sales success story but only time will tell if it can rise for the occasion!