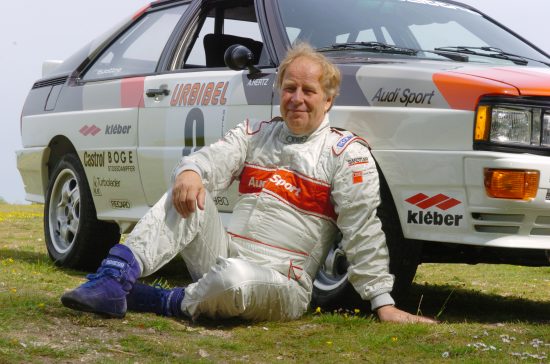 Finland’s Hannu Mikkola, who died on 26 February aged 78, was one of the most successful and versatile international rally drivers during a 31-year career in a variety of cars from Volvo PV544 to state-of-the-art Group B Audi S1 and a few others in between, writes Ken Davies.

Born 24 May 1942 at Joensuu, Finland, like many Scandinavian drivers of his period, Hannu started competing in a Volvo PV544 but by the 1970s became associated with Ford, clinching the 1972 East African Safari Rally, not yet a WRC event, in an Escort RS.

In 1974 he won his first championship rally, the daunting 1000 Lakes, again in an Escort. In 1975 he triumphed in Morocco, co-driven by current FIA president Jean Todt, in a Peugeot 504, before winning another 1000 Lakes, this time at the wheel of his Toyota Corolla.

In 1977 Hannu hooked-up with Swedish co-driver Arne Hertz and the duo was immediately successful in a partnership that would endure for 13 years, initially with his own team using Toyotas and Peugeots, and then in 1978 as a Ford works crew, winning the British Rally Championship in an Escort.

It all came together in 1983 with four wins and three second places enabling Hannu and Arne to finally take the World Championship title. In doing so, Hannu became to this day the oldest driver to win the world championship.

His 123 world championship starts yielded enviable statistics including 18 wins and 44 podiums, including seven 1000 Lakes Rally victories in his native Finlandand four on the RAC Rally of Great Britain. Hannu’s 18 victories keep him in the Top 10 of most successful rally drivers in history.

He was also adept at nursing a car on endurance type events and won the grueling Safari rally twice. But perhaps his most high-profile career victory came in the arduous 16,000-mile 1970 London to Mexico City World Cup Rally driving a 1600 Ford Escort with Gunner Palm, and this victory in what was considered to be the toughest rally ever run would spawn Ford’s iconic Escort Mexico model.

Since retiring, Hannu continued to make appearances as Rallying Royalty, including the Goodwood Festival of Speed where he also designed its famous rally stage. He was re-united with Gunnar Palm in 1995 for the 25th anniversary run of the 1970 London to Mexico World Cup Rally– which he won for the second time, and in 2000 he competed in the London-Sydney Marathon Rally in his 1968 1000 Lakes Rally winning Escort RS1600, co-driven by his oldest son, Juha Mikkola.

It is impossible to do justice to the many achievements of such a remarkable competitor and driver in this brief appreciation and we offer our condolence to Hannu’s family and his many friends.