You are here: Home / Motorsport / 2021 / Halloween thriller in North Wales

The Motorsport UK British Rally Championship makes a return to the legendary north Wales forests this Saturday as the Visit Conwy Cambrian Rally plays host to the penultimate round of the 2021 season.

Based at Llandudno, the event will also offer an additional challenge of a brand new closed-road asphalt stage to round off the event to test the impressive BRC line-up to the limit.

After a searing season of action on the stages, the fight for the three BRC categories is set to reach an important phase as dropped scores begin to take effect on the title race. Championship protagonists in BRC1, National Rally Title and Junior BRC will all be vying for a maximum points haul in the notoriously challenging Cambrian forests with the possibility of the titles being wrapped up ahead of the season finale next month. 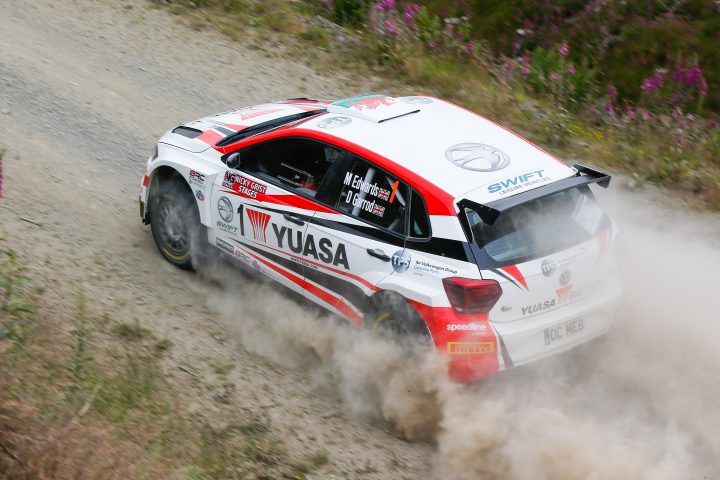 Wearing the coveted number one seed is defending British Rally Champion Matt Edwards (above) in his Melvyn Evans Motorsport Volkswagen Polo GTi. Very much the local hero of the event, the Conwy driver has won the rally on two occasions and a hat-trick on his home rally would put him and co-driver Darren Garrod in the box seat for a record-breaking third BRC title in a row. Utilising his Joker nomination, the opportunity to scoop an additional five points is also likely to be vital in the championship showdown.

However, Edwards is locked in an intense battle with teammate and fellow countryman Osian Pryce. The Machynlleth man scooped his first BRC win in eight years at the Mull Rally just a fortnight ago and is in stellar form as the series heads back into the woods. With co-driver Noel O’Sullivan alongside, it’s set to be a stellar clash between the duo as they grapple for the top spot and Pryce has an outside chance of taking the title if Edwards falters.

The M-Sport squad return to the BRC in force after skipping Mull, as Grampian Forest Rally winner Matthew Wilson starts at number three in his Ford Fiesta Rally2. With Stuart Loudon on the notes, Wilson has produced a blistering pace on his BRC return and is still in with a chance of a second British title, albeit relying on the demise of the Polos ahead.

Rhys Yates is in a similar position and could yet secure his first BRC win and title. The M-Sport Fiesta Rally2 ace has not enjoyed the best of luck this season and his results on paper are a far cry from his true pace. He and co-driver James Morgan will be aiming to turn the tide on a difficult championship in Wales.

Four-time British Champion Keith Cronin and co-driver Mickie Galvin have built their pace gradually in their Fiesta Rally2 this season after a welcome return to the championship. Fourth place on only Cronin’s second event behind the wheel since 2018 is a sign he means business and will have high hopes on the final gravel counter of the year.

Ollie Mellors and Max Freeman wheel out their Proton Iriz and as previous winners of the Cambrian, could well be a good bet for a podium or better this time around. Seb Perez and Gary McElhinney are fresh from an appearance on the World Rally Championship in Spain so have the benefit of seat time in their M-Sport Fiesta Rally2, whilst James Wilson and Arthur Kierans will face a race against time to ready their Hyundai i20 after a rally ending excursion at the non-championship Carlisle Stages last weekend.

The race for the National Rally Title is equally as close as the BRC top-flight with Duns ace Garry Pearson leading the charge. A sensational win in Mull ensured Pearson can head to the Cambrian with confidence and is riding the crest of a wave after he and co-driver Niall Burns scooped the Scottish Rally Championship title last weekend in their Skoda Fabia. They will also play their Joker card in Wales to stand a chance of gaining up to five additional points and should they do so, will be uncatchable in the race to the championship.