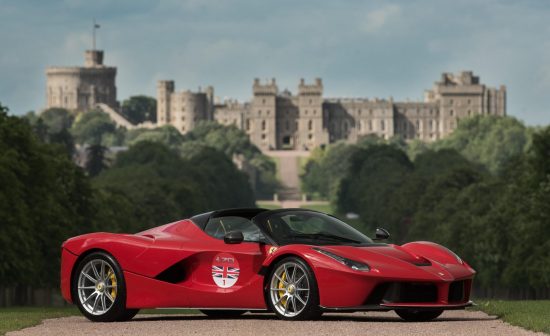 The 12 Official Ferrari Dealers in the UK will celebrate the Ferrari’s 70th Anniversary with a number of local dealer events headlined by the Limited Series LaFerrari Aperta at the Goodwood Festival of Speed from 29 June to 02 July.

After its starring role at the Festival of Speed, the LaFerrari Aperta (above at Windsor Castle) will be travelling around the Official Ferrari Dealer Network throughout July and into August, where fans will be able to see this exclusive car as part of an exciting display of Ferrari cars which will showcase the incredible heritage, design and racing history of 70 years of the world’s most powerful and recognisable automotive brand.

As Nissan LEAF charged past the milestone of 20,000 sales in the UK, owners of the best-selling electric vehicle have heaped praise on the model in the 2017 Driver Power survey.

Driver Power is the UK’s biggest and most in-depth car satisfaction survey, with seven surveys covering the different phases of vehicle ownership and the Nissan LEAF was awarded Best Green Car overall and also came top in the Best Engine and Gearbox and Best MPG and Running Costs awards categories.

Price is well down the list of priorities when drivers are on the hunt for a new car.

Safety (25%), the car’s condition (23%) and trust in the dealer (14%) all trump the necessity of an affordable price tag (12%) – perhaps indicating that despite concerns over rising inflation, drivers are drawn more to reliability and trustworthy dealers than to saving the pennies, says the AA-Populus poll of 18,077 AA members.

Autotalks, the world leader in Vehicle-to-Everything communication solutions, is launching its bike-to-vehicle solution technology for the prevention of motorcycle accidents.

The solution is based on the Bike-to-Everything chipset developed by the Israeli company and Bosch is carrying out a development alongside Ducati’s motorcycles and Cohda Wireless’ software stack.