You are here: Home / Motorsport / 2022 / Hirst and Pryce edging closer to crowns

He won the Interclub series event for the first time this year after already taking the opening three rounds of the series. 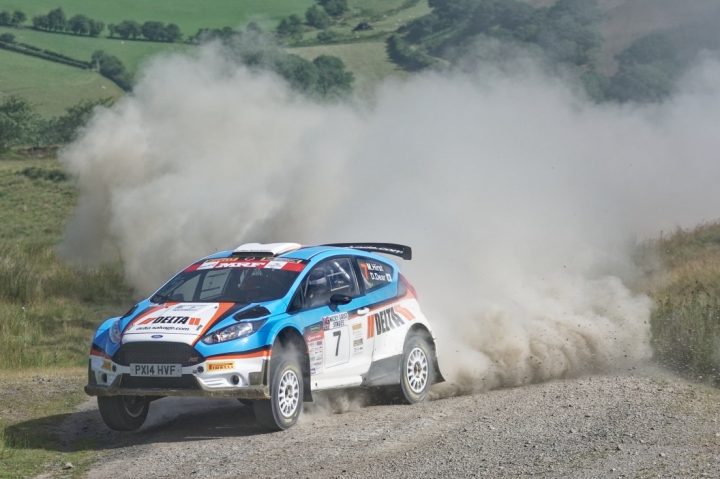 Hirst and co-driver Declan Dear (above) were once again on unbeatable form, scoring maximum points on the Builth Wells-based event in their Pirelli-shod Delta Salvage Ford Fiesta R5+.

“This is the first time that we’ve ever had a clean run on the Nicky Grist Stages and I’m delighted to come home with victory and maximum points. We were even able to ease off on the last stage because by then there was nothing to gain and everything to lose,” said Hirst.
“The car has been faultless again, the team has done a great job and Dec has been spot on in the co-driver’s seat – everything has been perfect.

“The Welsh Championship is looking good for us now, but it’s certainly by no means over. We haven’t won the title yet and we must maintain our focus if we want to bring the title home.”

James Giddings once again finished on the podium after a great run in his Group N Fordpad Mitsubishi Evo 9. Partnered by Lee Taylor, he collected third-placed points in the overall standings and won the Ravenol Welsh Challenge category.

The event was a round of the British Rally Championship and Osian Pryce celebrates 100th rally with outright victory on the Nicky Grist Stages – putting his BRC title bid back on track.

Osian Pryce (above) celebrated his 100th rally start in style by leading the Nicky Grist Stages from start-to-finish, with victory putting his British Rally Championship title-winning aspirations firmly back on track.

Starting with number 100 on the door of his Volkswagen Polo GTI R5, Osian took the lead on the opening stage of the Builth Wells-based rally and held it until the end of the 8 stage/45 stage mile event – winning by 14.9 seconds.

It wasn’t as easy as it sounds, as his lead was only 0.1 seconds after SS2 and a puncture near the end of the final stage provided a late cause for concern.

Nevertheless, against tough competition he and co-driver Noel O’Sullivan were inch-perfect all event, their Melvyn Evans Motorsport-prepared car never missed a beat, their Michelin tyres stood up well to the extreme punishment they had in the hot conditions and it was a very well-deserved victory for Osian in front of his family and many friends who had made the journey down from Machynlleth to support him.

Having won the opening round of the BRC, the Corbeau Seats Rally Tendring & Clacton, this is Osian’s second victory in three events and the perfect response to the disappointment of being disqualified from the Jim Clark Rally (for driving along a closed road stage on a puncture). 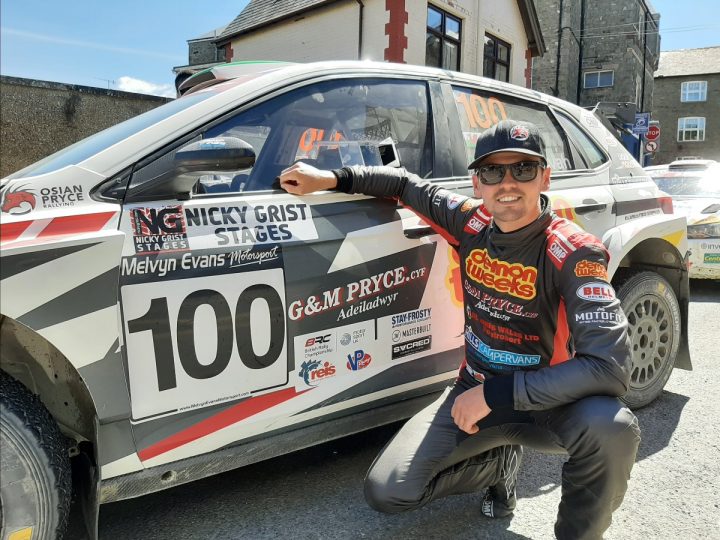 Osian’s stunning runs over the famous Halfway stage was key, as he set fastest time through there in both the morning (SS3) and afternoon (SS7) – both times extending his lead more than on any other stage.

Pryce and co-driver Noel O’Sullivan were a force to be reckoned with on the legendary gravel stages, taking their Michelin-shod Volkswagen Polo GTi to five fastest stage times on their way to their second victory of the season, adding to their Clacton Rally win.

It would be Jim Clark Rally winner Keith Cronin who was Pryce’s nearest challenger in second, whilst BRC returnee Jason Pritchard scooped his first BRC podium of the season in third, making it a Volkswagen rostrum lockout in the process.

Victory moves Osian up to second in the BRC drivers’ standings, 11 points behind Keith Cronin.

The event was a round of six British championships and it’s already pencilled in for 8 July 2023, when it will bring a further boost to the Mid-Wales town.

The 2022 Nicky Grist Stages brought a carnival atmosphere to Builth Wells at the weekend as 160 crews from six major British rally championships entertained the large number of visitors who created a magnificent buzz in the Service Area in Groe Park, at the Start and Finish ceremonies and in the nearby mid-Wales forest stages.

In glorious sunshine, spectators enjoyed some fantastic viewing in Halfway and Crychan, while special thanks go to the volunteer marshals and officials who kept everyone safe and the event running on time.