You are here: Home / Roadtests / Ford EcoSport races for sales 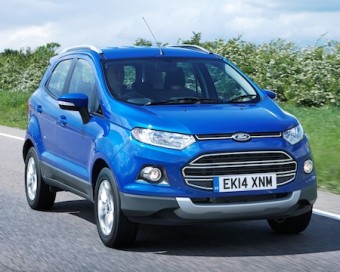 At long last the UK’s top selling car brand Ford has a competitor in the  B-segment  compact SUV or crossover sector of the new car market.

Under their global ‘One Ford’ policy Ford has been able to bring their EcoSport five door compact SUV to market to meet this growing demand.  The original Brazilian built EcoSport was introduced in 2003 for the South American market.  The new generation model built on the current Fiesta platform for Europe will be built in Chennai India and Ford of Britain expects this important new model to achieve around 3,500 UK sales in a full year.  Prices range from £14,995 to 17,495.  Competitors are numerous but include the Nissan Juke, Renault Captur, Dacia Duster and Peugeot 2008.

The EcoSport arrives with the option of three engines including their 2012, 2013 and 2014 International Engine of the Year – the 1.0-litre, three cylinder 125PS EcoBoost petrol. Also in the line-up is the 1.5-litre 112PS petrol with manual and automatic gearbox options and the 1.5-litre TDCi 90PS turbodiesel.

Oliver Rowe, Ford’s Product Affairs Manager said that 60% of UK customers are expected to choose the diesel engine option and 35% the 1.0-litre EcoBoost.

He added there are two levels of specification – Titanium and Titanium X available with all three engines with UK sales equally split between the two levels.  All EcoSports are front wheel drive.

Rowe added, “There is currently no demand for 4x4s in this sector where many customers drive in the urban jungle rather than go rural off-roading.”

He added, “With the arrival of the EcoSport now, the larger Ford Edge SUV due next year to go with our current C-segment Kuga, we will have three SUV/crossover ranges to fit market requirements – small medium and large.”

Ford launched the EcoSport to the UK media at the Commonwealth Games in Glasgow where they were the high profile official supplier of 1,123 eco and fuel efficient vehicles to transport Games officials and competitors to and from the competition venues.

Although the EcoSport is underpinned by a Fiesta platform the styling is much more aggressive and characterful, it is not a Fiesta on stilts although inside the fascia panel is Fiesta like.

The exterior upright and tall design will not appeal to everyone, the Blowfish mouth style front grille and the relatively old fashioned design of the spare wheel being positioned on the rear side hinged rear door are two areas that divide media opinions  and to some extent the public will be the same, lots of likes, lots of dislikes. 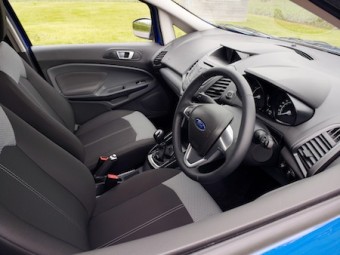 Inside there is a high riding position and large windows give really good all-round visibility.

Legroom and headroom is first class and with all the seats in use there is a 310-litre boot. Tumble forward the 60/40 split rear seats and this increases to 1,238-litres.

Mounting the spare wheel on the rear door harks back to old school 4x4s but it frees up more load space although it makes opening the side-hinged rear door quite clumsy if you are carrying bags.

As for driveability and despite its tall stance, the EcoSport inherits the nimbleness of the Fiesta. It is easy to park with good visibility, it had very little bodyroll during cornering on country roads and the suspension seemed well damped so the ride was comfortable – all most ‘real’ customers want.  Although the steering was accurate it offered little in the way of feedback on open roads being more set up for lightness-of-touch for town and city driving.

On our test drive programme in Scotland Ford had the two most popular engines for us to try, the 1.5-litre 90PS TDCi turbodiesel and the award winning 1.0-litre, three-cylinder EcoBoost turbo 125PS.  Although the 1.5-litre 112PS petrol engine carries the headline price of £14,995 and is available with manual and auto gearboxes, it is not expected to figure greatly for UK sales.

Despite the high mileage needed these days to justify the extra cost of diesel engines and diesel fuel, 60% of UK buyers are expected to choose the 1.5-litre 90PS turbodiesel unit because of its better fuel consumption and slightly lower tax levels.   This unit costs £500 more than the 1.0-litre EcoBoost petrol but it is significantly more sluggish to drive.

By comparison the 1.0-litre, 125PS three cylinder EcoBoost petrol engine felt livelier and more responsive. In addition to being £500 cheaper to buy it’s faster at 112mph, zero to 62mph takes 12.7 seconds and the Combined Cycle figure is 53.3mpg, (38.1mpg on test using the same route as the diesel model).  With CO2 emissions of 125g/km VED road tax will be the same £0 cost for the First Year rate but then it goes up to £110 for Year Two onwards.

High mileage or long-term owners will probably be justified in choosing the diesel engine but those who cover less mileage will enjoy the cheaper purchase price of the 1.0-litre petrol unit and more importantly the better performance in terms of outright speed and swifter acceleration.  It’s all about torque as the 1.0-litre petrol unit delivers 170Nm of torque from 1,400rpm, the 1.5-litre turbodiesel 205Nm but at a higher 1,750rpm level. 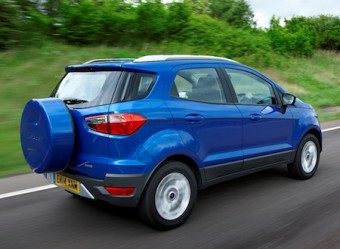 Yes the diesel unit offers more torque but in reality the 1.0-litre turbocharged unit supplied better pick-up and response from lower engine speeds in town traffic, negotiating out of junctions or going around roundabouts. Even during rural use the acceleration was better and the top speed faster.

The more powerful 1.0-litre petrol unit would be my choice – it is just nicer to drive with more zip when you need it.

Although no 4×4 version is offered, with its higher ground clearance, underbody skid plates and traction control some light off road capability will be possible.

Whichever engine is chosen the EcoSport brings Ford well and truly into play now into the fast growing compact SUV/crossover sector so better late than never!