British automotive manufacturers are calling for urgent action on spiralling costs as new analysis from the Society of Motor Manufacturers and Traders reveals firms face a £90 million uplift in energy bills this year – equivalent to more than 2,500 automotive jobs – as costs surge by 50%.

UK electricity prices are the most expensive of any European automotive manufacturing country and 59% higher than the EU average, meaning that last year, UK manufacturers could have saved almost £50 million on energy costs if they were buying in the EU rather than the UK. 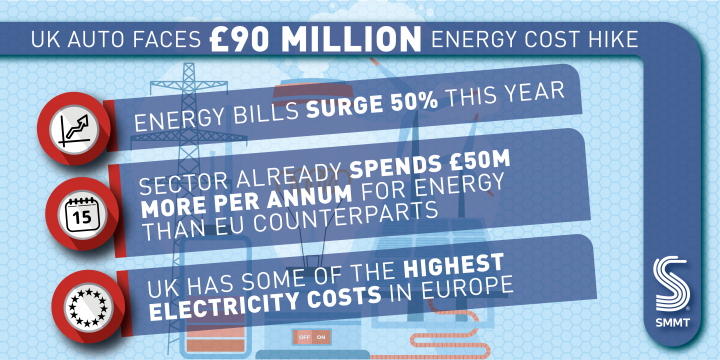 The additional cost of producing vehicles and components in the UK is putting manufacturers at a competitive disadvantage, stalling momentum at the very time the sector needs to make massive investments to meet accelerated timescales for zero emission transformation.

The fundamentals of the industry remain strong, as evidenced by the £4.9 billion publicly committed to UK vehicle production in 2021, following the signing of the EU-UK TCA.

Most of this investment, however, has been made by large manufacturers and, moreover, since March and war in Ukraine, energy prices have surged at the same time as battery producers and the sector must urgently accelerate and broaden this investment to SMEs across the supply base.

The news comes as SMMT sets out a fresh roadmap, ‘From Full Throttle to Full Charge’, with a clear vision of the sector leading the push to net zero, developing a UK automotive ecosystem which delivers both a healthy new market and competitive zero emission vehicle manufacturing capability.

The timeframe to act is narrowing, however, with 2024 a looming milestone when EU-UK Rules of Origin get tougher and the Government’s Zero Emission Vehicle Mandate kicks in.

With the UK implementing one of the most ambitious road transport decarbonisation timelines in the world, phasing out the sale of new petrol and diesel cars and vans by 2030, the urgency of action required is self-evident.

The report reveals the scope and scale of a broadened UK automotive supply chain, including the contribution of industries which supply into automotive such as steel, plastics and paint.

At stake in the transition are the 123,500 jobs supported in every region of the UK, across some 5,000 firms, which turnover a collective £21.2 billion every year, export products worth £7 billion and deliver £5.7 billion direct to the economy.

For many long-established component segments such as engine and exhaust producers and their sub-suppliers, the transition to electrification presents major challenges.

While some companies are already on the journey, many risk being left behind as the jobs and skills involved with internal combustion engine (ICE) technology may not be transferrable. At least 22,000 jobs, £11 billion of turnover and £2 billion GVA in the UK is currently reliant on ICE-based technologies.