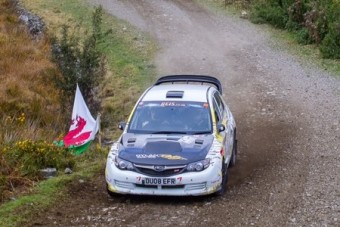 Following a battle that went all the way down to the final rally of the season, victory in the inaugural Ravenol Welsh Challenge has gone to Dylan Davies.

Competitors in the Pirelli MSA Welsh Forest Rally Championship were eligible for points in the Challenge based on the number of rounds that they competed on and their performance within their class, with the end of season prize fund valued at more than £3000.

Speaking after clinching the Challenge, Dylan described it as an honour to be the first winner and praised Ravenol’s initiative, adding, “This is a great incentive because anyone could have won it whether they were driving a Nissan Micra or a World Rally Car and it helps to bring the championship together because you are battling with everyone to win it.”

Dylan has already been using Ravenol products in his car this season and says that winning the Challenge means his lubricant bills for 2016 are already covered.

Meanwhile John Baker clinched his runner up spot on his 60th birthday, saying afterwards, “I’m over the moon and it was a great birthday present. Many thanks to Ravenol oils and the WAMC for a fantastic challenge, which is fair to all competitors regardless of car or class.  It made for a close and exciting end to the season.”

Newly elected Welsh Champion Bob Ceen said of his third place, “We are pleased to win this award and will make good use of the Ravenol product but I do feel sorry for Paul Davy who would have won it but for car issues on the last couple of rounds.”

The Challenge was the brainchild of Ravenol UK Managing Director Brian Chase and he commented, “We are delighted with our first season’s involvement with the Welsh Championship and the warm welcome we have received from the organisers and teams. We are grateful for all the hard work that Dave Evison, Gwyn Reynolds-Jones and the rest of the Championship organising team have put in to make the Challenge such a success and we look forward to being back in 2016 when we will be offering even more incentives to Championship contenders.”