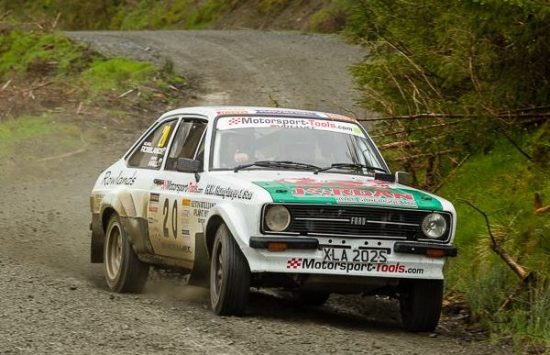 Two points behind the Ford Escort crew are Andy Davies and reigning junior co-driving champion Max Freeman and they will be keen to close that gap this weekend in their Subaru Impreza.

In third place lie Rudi Lancaster and Guy Weaver in their Escort RS1800, two points ahead of Daniel Moss and Sam Allen driving a Mitsubishi Evo 9.

Meanwhile, Dylan Davies and co-driver Llion Williams will be looking to get their season back on track after following up their second place points score on Rally North Wales with a non-finish on the Plains.

Among the ranks of Fiesta drivers in action this weekend will be former Champion Conor McCloskey and co-driver Jon Rowan in their World Rally Car and Martyn and Dawn England in their R5+ version.

Andy Davies also leads the Group N category for less modified cars with an eight point advantage over Dan Moss. In third place is Surrey’s Wug Utting with another Impreza pilot, Welshpool’s James Watkins, in fourth. Simon Dalton, meanwhile, will be looking to make up ground after a troubled start to the season in his Subaru.

The two wheel drive standings are headed by overall Championship leader Ieuan Rowlands ahead of Rudi Lancaster with Ieuan’s brother, John Rowlands making it an all Escort top three.

Among the junior competitors, aged under 23, looking to build a points haul in the category is Osian Owen, co-driving the Ford Escort RS of Steve Bennett.

The RAVENOL Welsh Challenge awards points based on a driver’s performance within their class. The lead is currently shared by Andy Davies and Rudi Lancaster with Ieuan Rowlands one point back in third place.

Competitors will cross the start line at the Royal Welsh Showground from 8:30 on Saturday morning to tackle seven classic Mid Wales forest stages before returning to the Showground from 16:00.