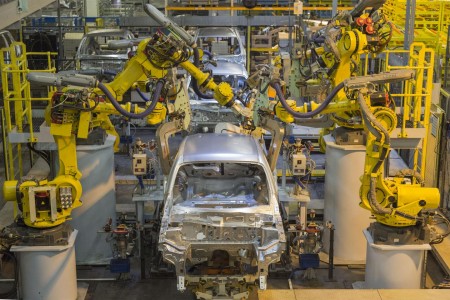 UK car manufacturing dipped to -1.0% in October, ending a 14-month run of growth for the industry, said the Society of Motor Manufacturers and Traders.

It reported 151,795 vehicles were built in October, with production for export growing taking an 80.9% share of volumes.

Despite the fall, domestic demand remains strong, with production in the year so far up 3.3% and at its highest level since 2005.

“Despite model changes which have ended the consistent growth pattern of the past year or so, we are still on track for a record number of exports.

“Given this dependence on global trade, it is crucial that British-built cars remain attractive to international buyers and exports are not subject to additional tariffs, costs and other barriers to successful trade.

“It is also essential government ensures there is economic stability and a competitive business environment to ensure we continue to attract the global investment that is behind this performance.”

A huge increase in overseas demand fuelled the growth, with exports rising 86.5% to counterbalance a decline of -46.4% in domestic production. Year-to-date figures show output for export remains ahead in 2016, up 12.8%, with more than half (55.6%) of UK-built CVs destined for overseas markets.

A massive boost has been given to the UK’s electric vehicle infrastructure and autonomous vehicles.

UK finance minister Philip Hammond announced £390 million of funding to prepare for the new generation of vehicles when he made is Autumn Statement saying, “Reliable transport networks are essential to growth and productivity,” he said, adding that the funding would “build on our competitive advantage in low-emission vehicles and the development of connected autonomous vehicles.”

Hammond also announced a 100 percent first-year capital allowance for the installation of an EV charging infrastructure. This will encourage businesses to invest in charging points and make the electric network stronger and more practical for users.