You are here: Home / Featured / Ben powers back into championship lead 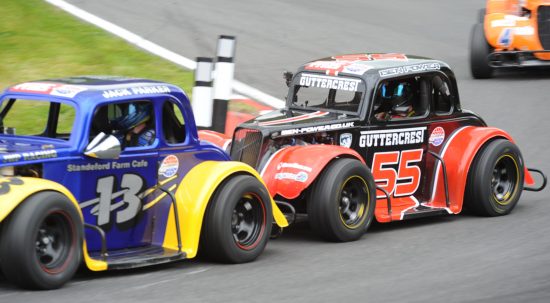 Power, aged 27, from Guilsfield, near Welshpool, won four of the weekend’s six races, and finished second in another.

He only missed out on Sunday’s final race, when he got caught up in an accident and had to retire with car damage.

“What a brilliant weekend,” said Power. “One of the best I’ve had in Legends. It was a great way to bounce back from our problems at the last round. The car was superb in all conditions, it’s just a shame what happened in the final on Sunday.”

Power won both heats on Saturday, ahead of Will Gibson in the first race, and ahead of defending champion John Mickel in the second.

In the rain-affected final, he had to settle for second behind Jack Parker, and ahead of Belgian visitor Guy Fastres.

On Sunday, he finished ahead of Tom Grainger in heat one and Steve Whitelegg in heat two, but the final was again hit by rain.

Power had to retire after suffering front-end damage in an accident, leaving Will Gibson to take the honours, ahead of Jack Parker and Mickel.