The Bentley Continental GTV8 must be the ultimate getaway car for a bank holiday or any other break for that matter, writes Robin Roberts.

GT is a very overused abbreviation but fully justified as a suffix to the Bentley Continental.

This 191-inch long two-door coupe oozes ability to cover immense distances without complaint and cocooned in complete luxury; the original Grand Tourer for the wealthiest of owners.

Of course, such excellence does not come cheap and today’s Bentley Continental GT maintains an air of aristocracy with its ability and a price to match. 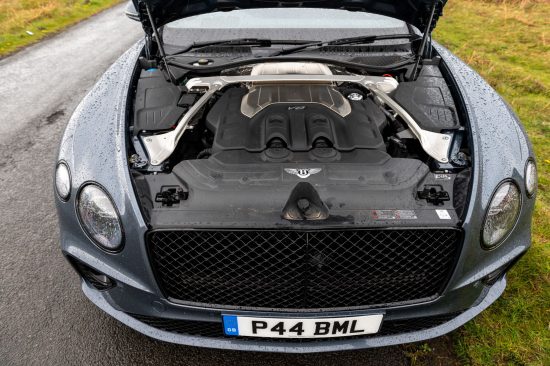 At the Bentley Continental GT’s heart is a highly sophisticated and very refined 4.0 litre V8 engine with twin-scroll turbo-chargers between the banks of cylinders which give a near linear power delivery and yet under light load one bank shuts down to save fuel but instantly responds to demand and throttle position.

Power is delivered through a well-engineered ZF automatic eight-speed transmission to an intelligent four-wheel-drive system that apportions traction as required by the wheels’ sensors. 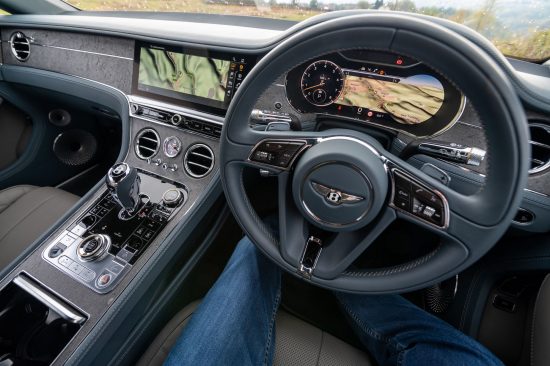 Surprisingly, the steering wheel was not very large and while thinking this might demand a lot of turning or made it twitchy, the variable ratio electric assistance was inspiring with its precision and effect. Ok, it was a big car to park in town but it really handled like a much smaller model on open roads and that’s the mark of a properly sorted performance car.

Most frequently used secondary controls were all close to hands around the column or on wheel-spokes and operated with a satisfying cushioned feel. The less important buttons were grouped along the fascia or on the console with some inserted into a touchscreen when not in great demand. 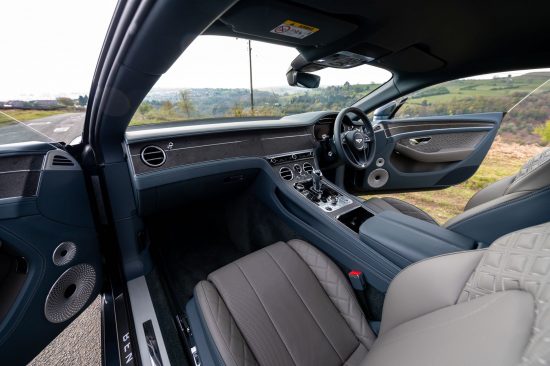 Our test car was fitted with large, clear to read main instruments infront of the driver but came with Bentley’s optional rotating display for secondary gauges in the centre of the dash which changed from plain veneer to normal or sporting gauges depending on the driver’s mood. A truly brilliant piece of engineering even if a very focused £4,820 option. 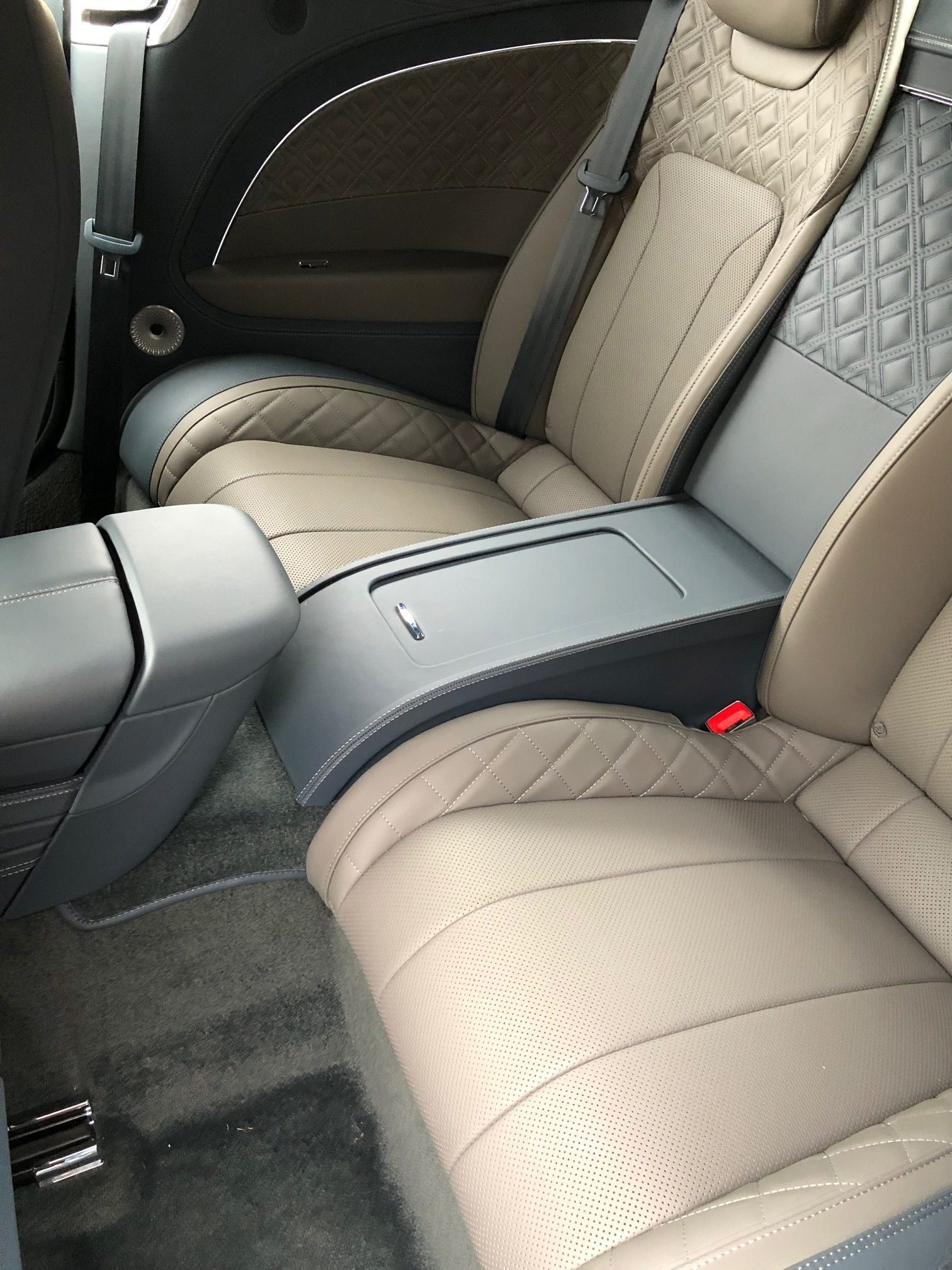 Heating and ventilation was remarkable in such a big 2+2 cabin with powerful fan, wide temperature control and retro pull-push knobs for the directional vents. Heated and cooling seats were very welcome with the option of a multi-choice massaging function, powered bolsters, cushion length and headrests, another £3,180.

Room infront was very good for legs, heads and arms, while the back pair of seats were not so generous for room but proved extremely comfortable. Access to them was slightly fiddly but once seated the vision from them was good to the sides.

The driver enjoyed good all round vision helped by radar sensors for traffic and sensors & cameras when manoeuvring. Very long range, bright headlights gave added safety at night and the wiper/ wash system was very effective. 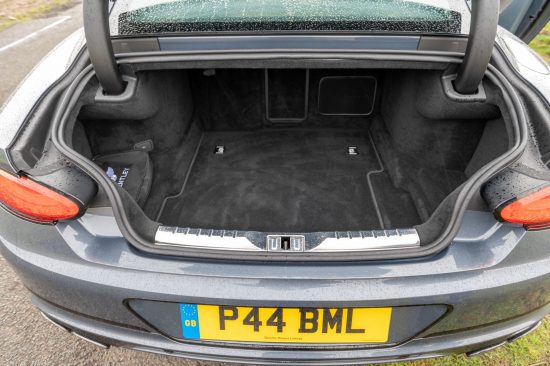 Oddments room was reasonable, not exceptional in a car of great touring ability, while the 12.6 cuft bootspace was very large, of a good shape and easy to load or empty, essential pre-requisites for a touring holiday.

A lot of thought and effort has gone into noise suppression in the Continental GTV8 and it is a very tranquil traveller with a muted engine note unless strong acceleration is needed when a pleasant roar emits from the exhausts. Other mechanical noises are extremely low apart from the wide 22-inch tyres on poor tarmac at low speed. Even at motorway speed the Continental GTV8 is exceptionally quiet until you kick-down to overtake. 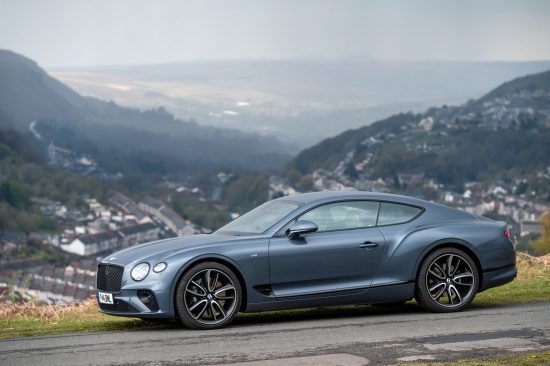 It would be wrong to think of this as a pure motorway cruiser. It will do that without question and without complaint, but where it really impresses is on cross country trips, through winding lanes, countryside, valleys or moors and these are gobbled up mile after mile as we found on our round trip to West Wales.

Power response is instant, strong with 568lbft torque and generally is just waiting to be unleashed.

Alter the driving modes from economy to sporting and you instantly get even more urge from under your foot, sharpness through the steering and tauter temperament from a sportier feeling suspension. 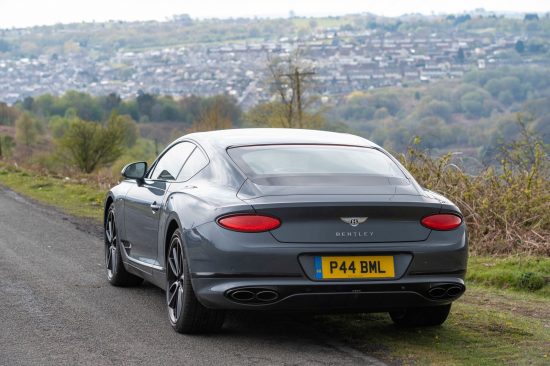 It’s character changes and you appreciate this is an expensive car, but in reality it’s not one car but several with their own personalities portrayed and revealed.

You emerge from the Continental GTV8 feeling unstressed, at one with the world and ready for that Grand Tour of Europe when it is again allowed. 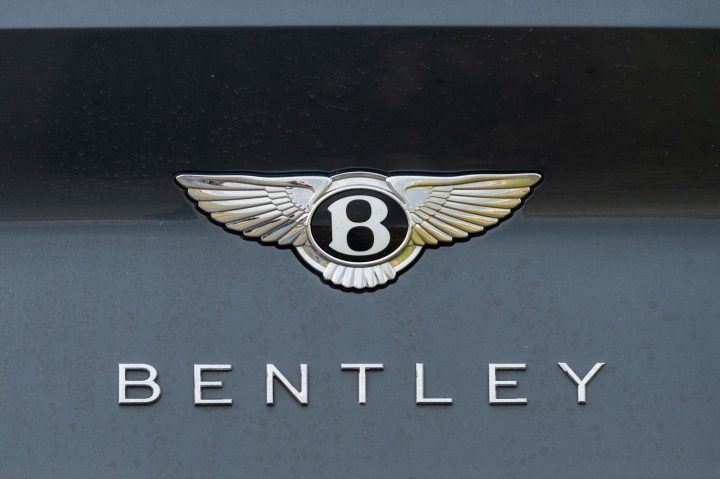