But unlike Lexus, Infiniti does not aim to be a volume brand and sells only in 34 markets around the World with the USA being its most successful. Recently they have upped their PR function to gain their brand a higher profile and of course they are sponsorship and technology partners with the Red Bull/Renault F1 team.

My test Infiniti was the M35h GT Premium priced at £45,990 on-the-road. Sweeping lines exude efficiency under them

All versions have an automatic transmission as standard. Depending on the engine chosen there is the choice of GT, GT Premium, S and S Premium levels of specification plus the new Hybrid Business addition which is available until the end of this year.

Company car tax for an executive high performance hybrid saloon is a very reasonable 22 per cent because of the low CO2 emissions of 159g/km against 199g/km for the diesel which results in 33 per cent BIK. Road tax for the hybrid is £170 a year; the diesel is £460 in the First Year rate reducing to £250 for the second year onwards.

All M four door roomy saloon models have a very high level of specification as standard no matter what level is chosen.

It is an imposing executive saloon and the styling projects a sports image rather than a dull business workhorse. On the down-side the hybrid’s lithium-ion battery pack eats into the boot space with 350-litre of space rather than the non-hybrid versions 500-litres. 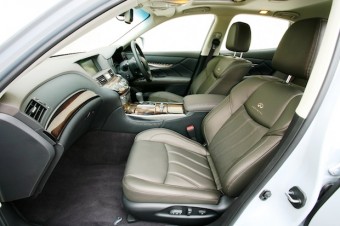 The M35h impressed me by its eerie interior quietness thanks to the silky smooth V6, 302bhp petrol engine and silent 67bhp electric motor embedded within the transmission.

As well as powering the car when needed the electric motor acts as a generator and starter motor and it recovers energy normally lost during deceleration and braking. This system also does away with the need for a torque converter used in many conventional automatic transmissions. Tasteful interior blends with high tech info systems

Generally the gearchanges were seamless and the move from petrol-only drive to petrol/electric to electric-only was not noticeable.

The ride comfort was generally pleasing, much better than BMW/Audi sports spec competitors, but the handling was less direct and the responses not as sharp.

Switching from ECO to normal mode brought the car to life and then from normal to sport really lit the fuse. The acceleration is stunning and faster than a BMW 535i M-Sport saloon.

I’m not sure if any other executive saloon sheds its ECO mode to ‘sports’ performance so quickly and easily. 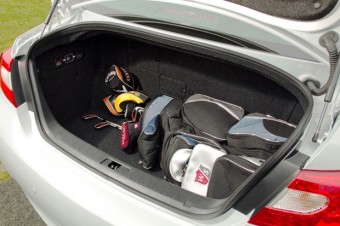 Overall I would term the Infiniti M35h as very interesting in terms of technology. The way the electric motor is positioned within the transmission is clever and it really works.

Battery pack eats into boot space There is no bulky electric motor taking up more space in the engine compartment or in the boot. If only battery manufacturers could reduce the size and weight of the battery packs then this form of hybrid electric boost power would be an even larger step forward.

However the Infiniti hybrid system is significant step towards hybrid technology becoming an intricate component in all drivetrains no matter what the car is, just like it has in F1 racing.