You are here: Home / First Drives / BMW 2 Series Active Tourer easy but expensive to live with 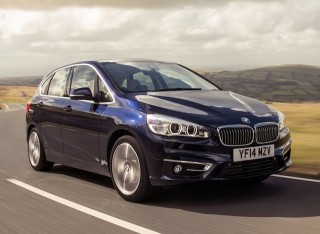 That is a very significant change for BMW as they have always promoted their philosophy of using a front longitudinal engine layout with rear wheel drive, and latterly some models with xDrive (4WD), to achieve the optimum balance of sports performance and handling.

As its name suggests the BMW 2 Series Active Tourer is a member of the relatively new BMW 2 Series family which so far only consists of a Coupe range and is a progression of the popular 1 Series three and five door hatchback line-up.

In essence the 2 Series Active Tourer is a slightly larger but taller version of the 1 Series Hatchback with the focus moving away from driving dynamics, sharp handling and rear wheel drive, to front wheel drive offering more space and versatile seating.

The Active Tourer uses BMW Group’s new modular platform already in use for the front wheel drive new generation MINI three and five door hatchbacks.  BMW says 20 model ranges across both BMW and MINI brands will use the new platform in future.

A wider range of transverse petrol and turbodiesel engines and the option of four wheel drive xDrive models will follow at the end of this year. These will be 220i and 225i xDrive petrol models and 216d and 220d turbodiesels, the latter having front wheel drive and xDrive options.

There is the choice of manual and automatic transmissions depending on the engine chosen. In the future it is expected a plug-in-petrol-electric-hybrid power source will also joins the line-up.

Specification levels currently are SE, Sport, Luxury and M Sport.   Prices for the first launch models – the 218i and 218d start from £22,125 and rise to £27,205.  Prices for the additional models with other engine options have yet to be confirmed.

Alex Morgan, small car product manager for BMW UK said around 5,000 units a year is the target but this is a new sector for BMW so this figure is only an estimate with a 50/50 sales split between retail and fleet customers.

He also expects 75% of UK Sports Tourer sales to go to conquest customers, people new to the BMW brand.   The sales split between the two first engines on offer will be 50/50 but once the range is complete he estimates that 70% of UK customers will choose a diesel engine.

He added that it is estimated that 50% of Active Tourer UK buyers will be empty nesters and around 30% will be families.

Both groups will be tempted by the vehicle’s space, comfort and practicality. The remaining 20% could be business professionals, such as photographers, who will appreciate the load carrying space.

BMW UK expect the Active Tourer/MPV market sector to become the second largest in the C-segment, also known as lower medium, with annual sales growing to around 900,000 units over the next seven years.

Hatchbacks are likely to remain the most popular in this segment with a 52% market share followed by MPV type models such as the Active Tourer at 17% and then SUV/crossovers at 16%. Coupes, Cabrios, Saloons, Estates and Roadsters will take up the remaining small proportion of sales.

The BMW Active Tourer will compete for sales against its fellow premium brand Mercedes-Benz B-Class and the volume sales brand models such as the new VW Golf SV, Citroen C4 Picasso, Ford C-Max and Vauxhall Zafira.   The five door Active Tourer is marginally longer than the 1 Series Hatchbacks measuring 4,342mm, it is 1,800mm wide and 1,555mm high.

Although having transverse engines at the front the Active Tourer still has the BMW signature long but low level bonnet with the twin kidney shaped grille flanked by the signature headlights.

The five door cabin is tall with large glass areas making it light and airy and giving excellent all round visibility especially with the higher command position seating making it easy to drive.

The rear seat backs are split 40/20/40 for easy folding in versatile combinations and they slide fore and aft together but not individually.

There is claimed to be more legroom for rear seat passengers than in the BMW 7 Series, certainly the leg and headroom on offer is good.

There is additional storage space under the 468-litre boot floor and the rear seat backs can be folded by the touch of a button from inside the boot.

Access to the boot and load area is via a full width electrically operated tailgate.  There is a wide range of options ranging from storage nets to roof bars, to roof boxes and even iPad holders which clip onto the backs of the front seats that can be bought to maximise the personalised user-friendly potential of the new models.

All models have a high level of standard specification in tune with its premium brand status bolstered by the usual array of additional BMW options. 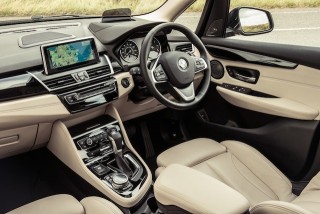 The best selling version is expected to be the Sport level, Sport referring to the specification not the performance.  The grade above Sport – Luxury – will be the second most popular.

The fascia panel has BMW’s typical layering design with free-standing controls with soft-touch materials throughout.

With so much emphasis on using a transverse front engine design to give extra interior space it is odd that the dashboard/fascia panel is very deep with lots of wasted space between the steering wheel and the base of the windscreen.

This area in some other MPV type vehicles is used for storage compartments.  There is a 6.5-inch colour screen operated by BMW’s signature iDrive rotary controller located next to the gearlever and the electronic parking brake and the Eco-Pro driving mode selector, which gives Sport, Eco and Comfort settings, is positioned just in front of the gear lever but marginally out of site of the driver.

Apart from the roomy body design the most significant change for BMW is adopting the transverse engine layout for all versions.

These are the first two engines available and will be the main choices even though more engines and a hybrid will be added. 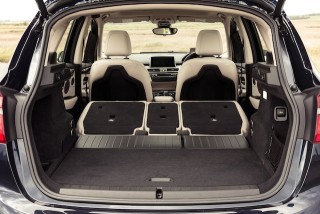 A high proportion, about 70%, are expected to be empty-nesters which suggest lower annual mileages so the cheaper to buy petrol unit would appear sensible, the same for the 30% of young family customers.

With business users expected to take 20% of sales they should logically choose the diesel engine.  But when it comes to choosing an engine it rarely ends up a logical decision.

Both EU6 compliant modular units use a 500cc per cylinder capacity so the petrol ends up as 1,500cc and the diesel at 2,000cc.

The petrol unit develops 136hp but being a three-cylinder unit torque output is a priority for acceptable responsive performance.  This unit produces 220Nm (162lb ft) from just 1,250rpm so the grunt is there once underway.

We mostly all found it just a bit difficult to judge the right amount of rpm to get the vehicle going – too little and it stalled very easily.

Underway the engine revved freely and willingly with a distinctive three-cylinder tone to it.  With the six-speed manual gearbox it works well but you need to be in the right gear at the right time to comfortably climb hills or overtake slower traffic. 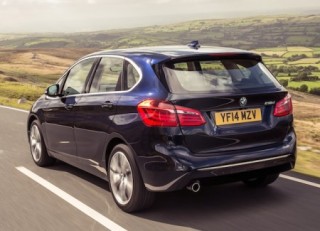 On the open road it cruises in sixth gear quite happily but you do notice the lack of that all important one more cylinder. However the 2.0-litre, 150hp, four cylinder turbodiesel unit with 330Nm (243lb ft) of torque is significantly more responsive.

Common with both engines was a notchy gearchange from the new manual transmission; typical MINI transverse layout rather than the usual slick BMW longitudinal format.

The front wheel drive Active Tourer is designed for spacious, comfortable and versatile transport, all those things it does well and it looks smart.

It is not as sharp in the handling department as traditional rear wheel drive BMW models with a tendency for front wheel drive understeer and of course being a tall vehicle there is more body-roll but I’m sure MPV buyers will not be put off by those small issues.

218i petrol engine is good but the new  218d diesel engine is better with better response, its faster and more fuel and tax efficient but over £2,000 more costly, rear three seats are not individual units for maximum seating flexibility, notchy manual gearchange, not as sharp in the handling department as the new VW Golf SV.