You are here: Home / Featured / WRGB thrills fans until the last stage 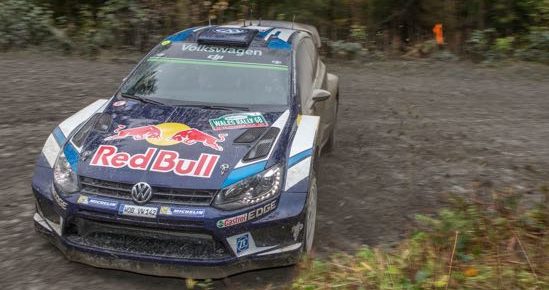 Three days of high-octane entertainment reached a climax at Wales Rally GB yesterday as World Rally Champion Sébastien Ogier fought onto the top of the podium in Llandudno in the series’ closest finish of the year.

Ogier proved himself once again as he conquered the event’s classic 22-stages challenge, the first WRC round the Frenchman has won four times in a row, and in so doing securing the Manufacturers’ crown for Volkswagen for a fourth consecutive year.

He joins Hannu Mikkola and Petter Solberg in an elite club of four-time winners on British soil.

Ogier tamed some of the most iconic roads in world rallying with Sunday’s final leg from the high-speed test of Clocaenog to the fast and wide Alwen and Brenig, which boasts one of the most dramatic finishes on the WRC calendar on top of the Llyn Brenig dam.

“To draw equal on wins here with Petter and Hannu is incredible – they’re two of the giants of our sport,” Ogier said. “It’s always a huge challenge to win in Wales. It’s funny – a few years ago, this was one of my least favourite rallies on the calendar as I really found it difficult to master and now it’s one I always really enjoy. The stages are beautiful and you’re always on the limit and close to the edge.”

The rally winner had to fend off a determined charge throughout the event from Ott Tänak, with the Estonian winning more stages than anybody else as he valiantly took the fight to the most successful driver of the current era and ultimately closed to within barely ten seconds.

Belgian ace Thierry Neuville prevailed in a Hyundai scrap for the final spot on the.

Leading Welshman Osian Pryce was unfortunately eliminated on the final day by a radiator leak, while Tony Jardine and Olympic gold medallist Amy Williams reached the finish ramp in 39th position in a Mitsubishi Evo. In the supporting WRGB National Rally, Bruce McCombie dominated in his Mitsubishi Evo, with multiple British Rally Champion Jimmy McRae 15th in a Vauxhall Magnum