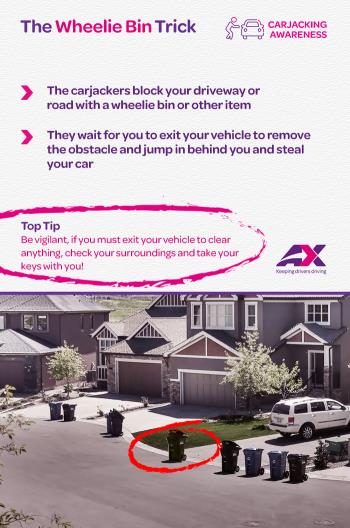 Wheelie bins and dead animals are being used to steal cars.

The recent rise in car thefts in Britain could be due to a worrying upsurge in car-jackings according to AX, provider of vehicle protection technologies and replacement vehicles.

Home Office statistics reveal thefts of vehicles to be at a 10-year high – to over 110,000 incidents in the year to March 2018 – with keyless systems vulnerable to hacking suspected of being responsible.

However, experts at AX say the increase is strongly correlated with the wave of car-jackings across the country, with some areas including the Midlands apparently affected more than elsewhere.

The trend has been identified as the vehicle technology and accident aftercare specialist releases its top tips to help prevent car-jackings, including simple steps such as never remotely unlocking a car from a distance.

A slew of social and traditional media reports, particularly in the Midlands, together with intelligence coming through AX operatives, point to a rise across the UK and new car-jacking tactics being used.

Handling hundreds of claims every week and managing large fleets of vehicles including its own, it doesn’t take long for AX operatives to spot new trends emerging and the latest tactics being used to steal vehicles. 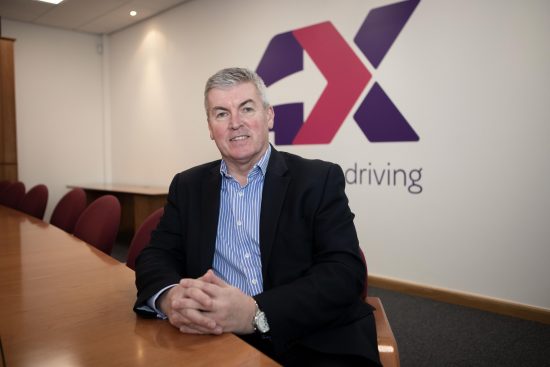 Neil Thomas, Director of Investigative Services at AX and a former Detective Inspector for West Midlands Police, said, “In my experience criminals are often unimaginative and sometimes the tactics go no further than simply dragging people out of nice cars.

“However, as vehicle thefts rise, we’ve noticed new methods being used that are much sneakier than using physical violence alone. We urge drivers to remain vigilant and, most importantly, if you are threatened with violence, give up your car – your life is far more valuable than any vehicle.”

However, there are some basic tips offered by Mr Thomas that motorists can use to safeguard themselves against car-jacking criminals.

It may sound obvious but try to remain vigilant when driving, parking or returning to your car- most people say they had a feeling that something just ‘seemed wrong’ before they were attacked. Don’t ignore your senses, as they are often right.

As you approach your car in the car park, try to have a quick check around it – thieves sometimes push door mirrors in the hope you will start the car and then get out to move them back into place, leaving the engine running.

In a busy supermarket car park, when you have heavy bags to carry, you may be tempted to remotely unlock your car as you walk towards it. This could help a thief pinpoint your car and make it easier for them to approach you without appearing too obvious.

Most modern car doors lock automatically when you drive off but, while you are getting ready to pull away, the doors will be open – manually lock them.

If you are driving and become concerned you are about to be attacked, try to call for help on your mobile and attract attention by sounding your horn; most thieves don’t want to be filmed by witnesses because it increases the chances of them being caught.

How to avoid and protect yourself from car-jacking visit: https://www.ax-uk.com/carjackingtips