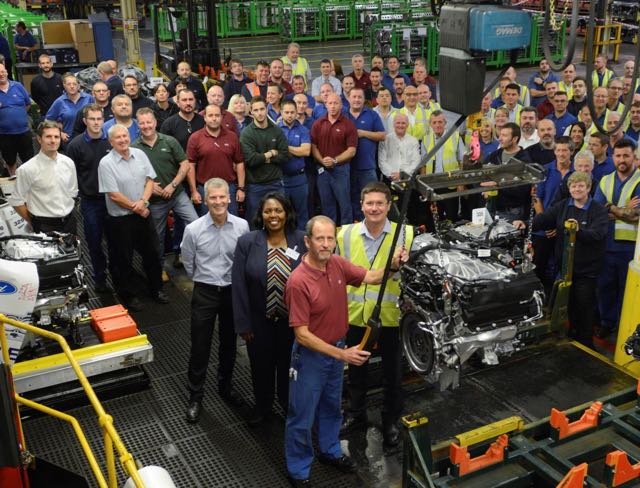 Jaguar Land Rover is moving its petrol V8 engine line from the Ford Bridgend Engine Plant to its in-house power centre at Wolverhampton.

Workers at the South Wales engine plant, which will close next month, have been building buffer stocks of the V8 engines to continue supplies to the luxury car maker until it can resume production in the West Midlands.

Ford Bridgend has been building the Jaguar Land Rover V6 and V8 engines since the early 1990s when the company owned the prestige brands.

In September 2016 the plant’s 20 Millionth power unit (above) was a Jaguar engine and  it produced the 1 millionth JLR engine in May 2018 (below).

There have been discussions about some Welsh workers being offered jobs in the West Midlands making the new units but this seems unlikely and has not been confirmed by JLR.

The fourth generation of the AJ petrol engines for famous saloons, coupes, sports cars and off-roaders are expected in about 18 months and to continue for a further five years until tough new EU7 emissions legislation enters.

Then, its understood, JLR will use its own versions of BMWV8 units under a manufacturing agreement they have discussed.

The big petrol engines are popular in America and the Middle East which do not abide by the EU emissions legislation.

Wolverhampton already make JLRs smaller petrol and diesel engines and the move will be welcome boost to its workforce and local economy.