Collaboration to cut costs but not quality is very evident in the Suzuki Swace.

There’s a lot more component sharing going on throughout the global motor industry than many realise but it’s not been a feature of UK in recent years, with just a few exceptions. 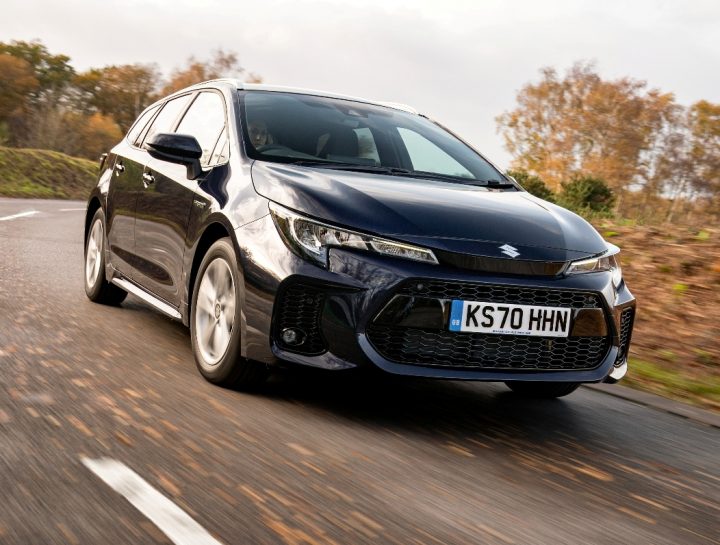 We had extensive badge engineering across Midlands’ factories between the 1950s and 1980s but with the disappearance of the British Leyland group that also ended swopping brands’ models.

Until fairly recently anyway and in 2019 Toyota and Suzuki entered into an agreement to badge engineer models in the former’s Derby car assembly plant.

The Suzuki Swace hybrid 5-door mid-sized estate is the second recent model to join the Suzuki range from their partnership with Toyota which also manufacture the Across Plug-in-Hybrid SUV based on the latest RAV4 PHEV and the Swace is derived from the Corolla Estate.

It means all Suzuki models are hybrids and they can meet ever more stringent group exhaust emission targets and offset rising engineering costs which reduce profits. What’s more, it’s good for UK exports as Suzuki GB will be annually exporting between 11,000 to 12,000-UK built Swace vehicles to the EU.

There is no direct model-for-model comparison between the Toyota and Suzuki brands and the latter is much simpler with just the 120hp 1.8-litre hybrid powertrain, CVT auto gearbox and SZ-T and SZ5 specification levels  at £27,499 and £29,299 respectively.  There is currently no 2.0 litre version as in the Toyota Corolla estate. 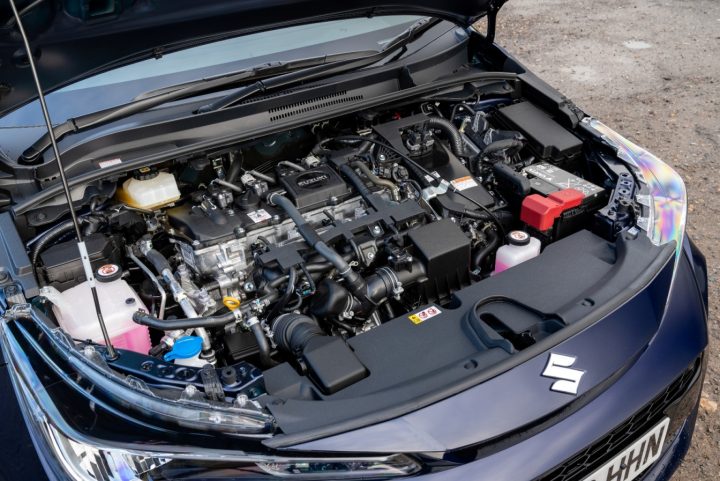 The two brands differ in warranty cover and the Suzuki versions don’t have standard satnav but rely on a plug-in to the user’s mobile phone and there’re some minor trim and equipment differences.

So, there is a shaving of some equipment but possibly nothing to bother a prospective buyer saving a couple of thousand pounds in these tougher times.

Suzuki Swace has the well known Toyota 1.8-litre, 4-cylinder normally aspirated direct injection petrol engine developing 102hp boosted by an electric motor of 53kW giving a total self-charging hybrid system output of 122hp  and torque of 163Nm from the electric motor overlapping with the  142Nm of torque from 3,600rpm from the petrol engine.

Drive to the front wheels is through a CVT auto transmission and there are the usual Normal, Eco and Sport selectable driving modes plus EV Drive Mode which the driver selects for solely driving via the electric motor for short distances, especially suitable for use in residential areas early in the morning or late at night, or in garages and indoor cat parks if the traction battery is sufficiently charged. 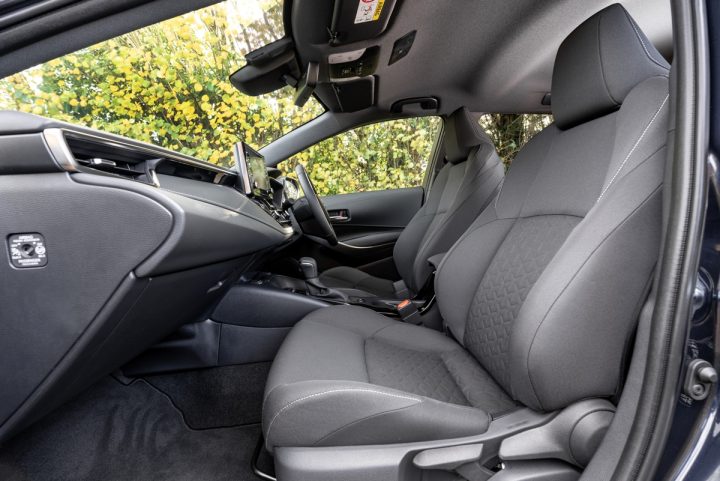 The Swace with its petrol-electric self-charging powertrain can be driven either by the electric motor, the engine and electric motor combined or the engine can charge the battery via the on-board generator while driving.

During deceleration and braking the electric motor also uses the wheel rotation to generate electricity to charge the lithium-ion battery positioned under the boot floor. There is no plug-in PHEV mains charging facility with this system and no such thing as range anxiety as with pure electric cars.

For estate buyers, the access and capacity of the luggage space is important and  this has a minimum 596-litre with the split rear seats in use and 1,606-litre with the rear seat backs folded down fully flat.

Thoughtfully, there is a remote lever close to the fifth door  to fold down the seats in the luggage area while the rear sill is low and the floor is level with it so it’s easy to slide heavier items into the boot.

For those that tow the braked towing weight is only 750kg due to the weight of the hybrid components fitted, so worth remembering if you have a trailer. 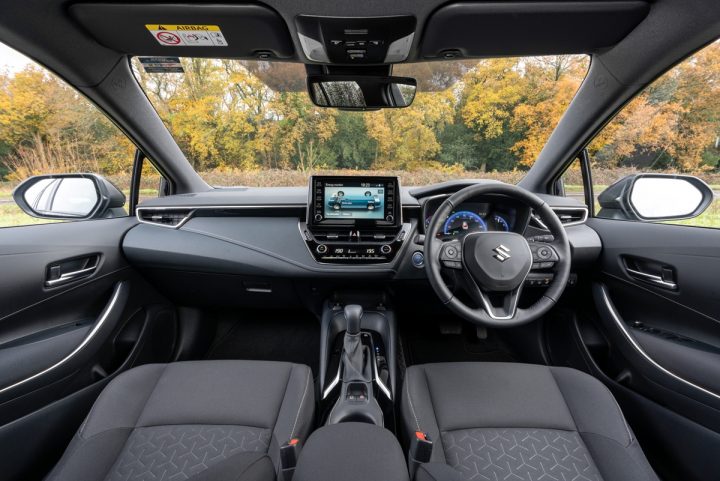 Inside the design is straight from the Toyota Corolla, with well positioned controls and a centrally positioned ‘floating’ 8-inch touchscreen for using the radio and other functions.

Thankfully the heating and ventilation controls are not via the touchscreen, they have their own logical place beneath and are simple and easy to use.

The usual steering wheel mounted buttons and stalks are convenient while Bluetooth is included and compatible with Apple CarPlay, Android Auto and MirrorLink.

It can be a fiddle to find the cable plug in for the phone to the left of console and under the fascia.

The centre console between the seats houses the cupholders and storage and the doors have adequate holders as well as storage.

The highly refined and sophisticated powertrain offers eco, normal or sporting modes to make the most of the electric motor, petrol engine or both and is seamless moving between them if you choose to manually select them. 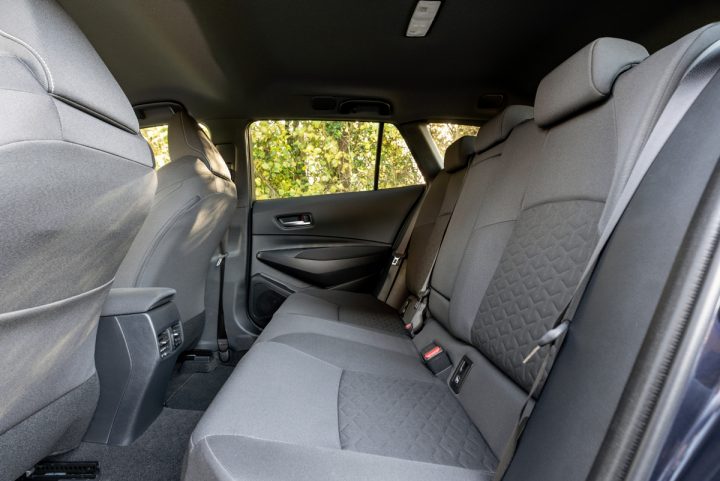 Left to its own devices it will decide which is best for any throttle setting and despite a shorter than usual test for us through mostly urban roads it provided an overall consumption of 45mpg, a lot less than we saw 12 months ago when it went north of 61mpg. That shows how where you drive can be as important as how you drive because the SZ-T was used over more rural roads than the SZ5.

Nevertheless, we liked the refined engine and gearbox, the feel through the steering and well balanced brakes underfoot.

Ride was slightly firm but it soaked up bumps well even if you could hear it working away, the handling was failsafe even with a load aboard. It’s an easy car to use and live with. 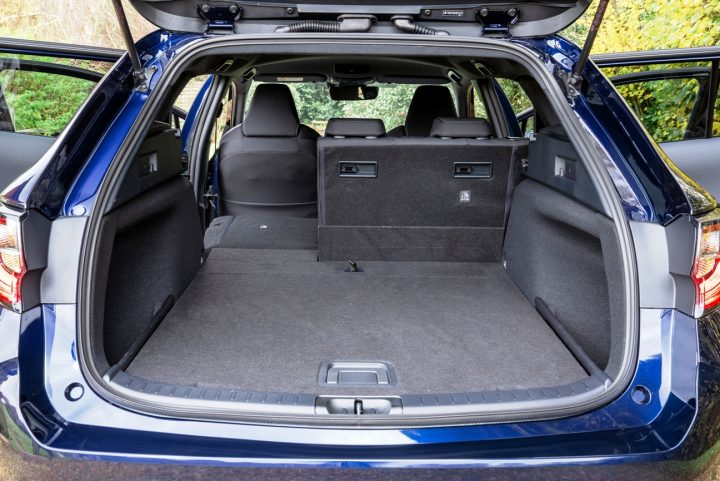 Visibility is good all round, access is easy and seats very comfortable with reasonable adjustment range on the front pair.

I liked the wipers, good lights and generally low noise levels in the Swace SZ5.

The growing number of estate models now on sale will please many families who do not want the size of an MPV or SUV but still need room for bikes, pushchairs and backpacks.

The Suzuki Swace is right for them and it really lacks very little but offers a lot in return at a reasonable price. You just have to decide which model best suits you. 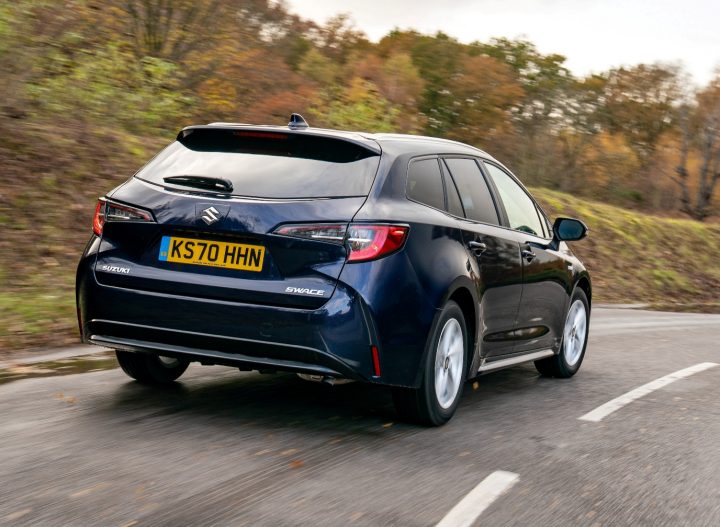