The Subaru Levorg is not what you might call eye-candy, but it has EyeSight.

That’s the latest all-embracing collision avoidance technology which reduces the likelihood and severity of accidents.

It may not be in the forefront of your mind when looking for an all-purpose 4×4 quality estate, but the Levorg really can hold its own against some of the better brands from Germany.

Subaru has a loyal following in the UK, mostly thanks to its previous legendary performance in the World Rally Championship and latterly in the British Touring Car Championship.

Rallying is not in its current competition plans but the circuit series has a very good following with its sporty model.

Away from the track, the Levorg Crossover can hold its own off-the-beaten track, thanks to a really simple, intelligent and effective 4WD system. It’s not a heavyweight off-roader but capable car for winter and moorland tracks.

I only wished that it had more power to pull along when laden, so it had to work harder and with more thirst in some conditions.

That said, I managed to nudge the fuel economy up to 37mpg, a full 10mpg better than I did 12 months earlier in another version and was close to the claimed 40mpg, and that is remarkable. 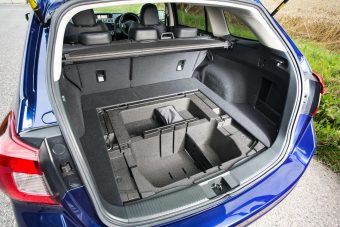 So the economy can widely vary, the performance needs to be encouraged out of the boxer engine and then it sounds like it’s in a fight, but it still delivers a smooth output and a good ride with excellent handling.

You never felt unsafe or the Levorg was unsettled, it admirably coped with bad surfaces even if it let you hear how hard it was working away underneath.

The big, padded and soft seats were very comfortable with good adjustment in the front, plenty of room throughout and good visibility except when reversing and the corners were hidden. You have rear radar and camera to assist with parking but still need to exercise caution.

Oddments room is plentiful and the bootspace is very good for a family car, with quick folding seats to nearly triple the loadspace.

In the front the driver is well catered for with excellent major and minor controls, big clear instruments but a somewhat dark fascia and interior trim.

Heating and ventilation works well and there’re powered windows, but there is no sunroof. 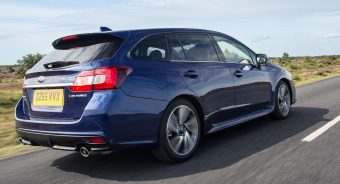 I liked the steering and brakes, both positive and reassuring in action, and it held on a test slope without any drama.

The family friendly, user orientated Subaru Levorg is good value for money, however you look at it.

Against: Road noise, dark interior, some blindspots when reversing and lack of mid-range power.