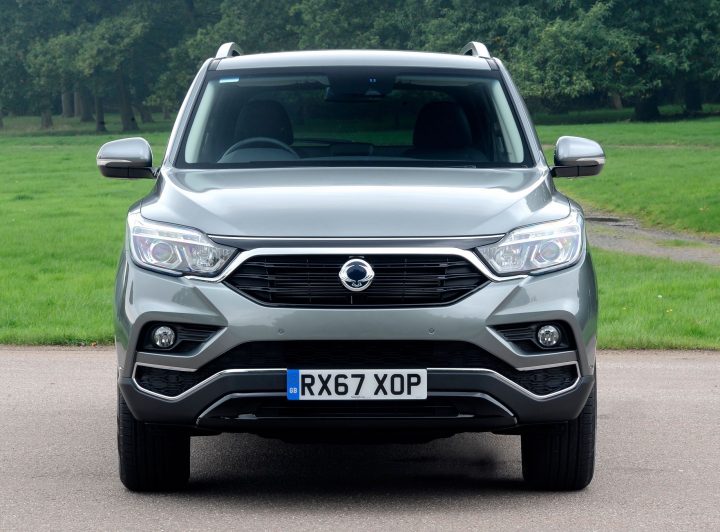 The world of serious, big 4×4 luxury SUVs is an exclusive one, and they don’t come much more exclusive than the SsangYong Rexton, writes Robin Roberts.

“What?” is a question I rightly anticipated from a number of drivers when I suggested the same point to them. It begs explanation, so here we go.

To put the company into perspective and where it sits alongside Korea’s better known Hyundai and Kia models, SsangYong is the country’s oldest vehicle manufacturer and was founded in 1954. Today it’s 73% owned by India’s Mahindra & Mahindra engineering company and is currently the only 4×4 and SUV specialist manufacturer in Korea. It has also shared some development with another long established brand which is probably better known, Mercedes-Benz.

There’s a comparatively small range of three Rexton models sharing a common engine with choice of 6sp manual or 7sp automatic transmission, with five or seven seats from £27,500 to £37,500. Our test model was a 7-seat ELX with automatic transmission at £34,000 in metallic paint and fitted with the towing pack. 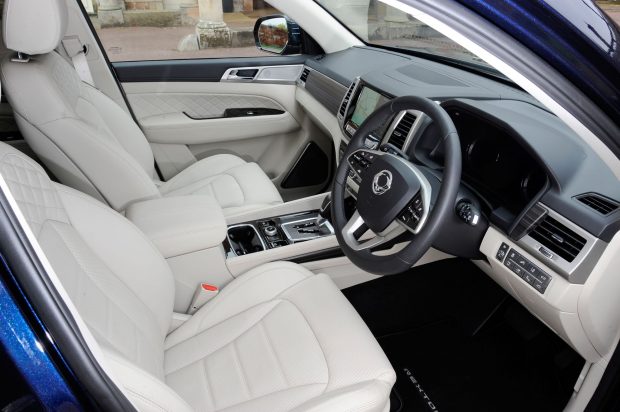 The 4cyl engine packs modest power for the 2.2 tonne kerbweight but it develops 420Nm of pulling power once underway through the seven gears. It’s more majestic than mighty, and at higher revolutions the engine noise intrudes more obviously than the constant lower vibrations from the road and suspension. 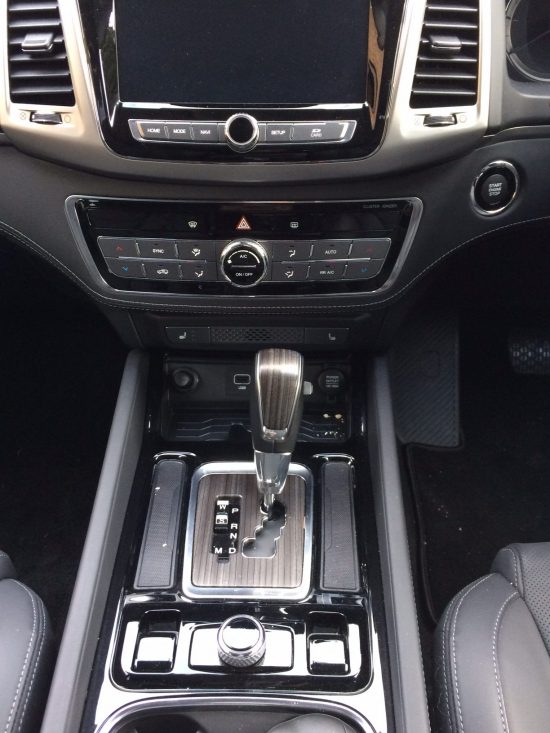 The performance is respectable rather than rapid when you look at the 0-60mph time but the way it gets there is impressive with the autobox slipping smoothly and quietly through the ratios and then settling down to a very relaxed motorway cruise at the legal limit.

Steering and stopping is easy and the handling is good once you come to terms with the slight pitching and rolling. The size becomes apparent only when looking for an urban parking space and bumpers tend to stick out of conventionally sized parking boxes. The car’s on-board sensors and cameras keep you out of trouble when manoeuvring. 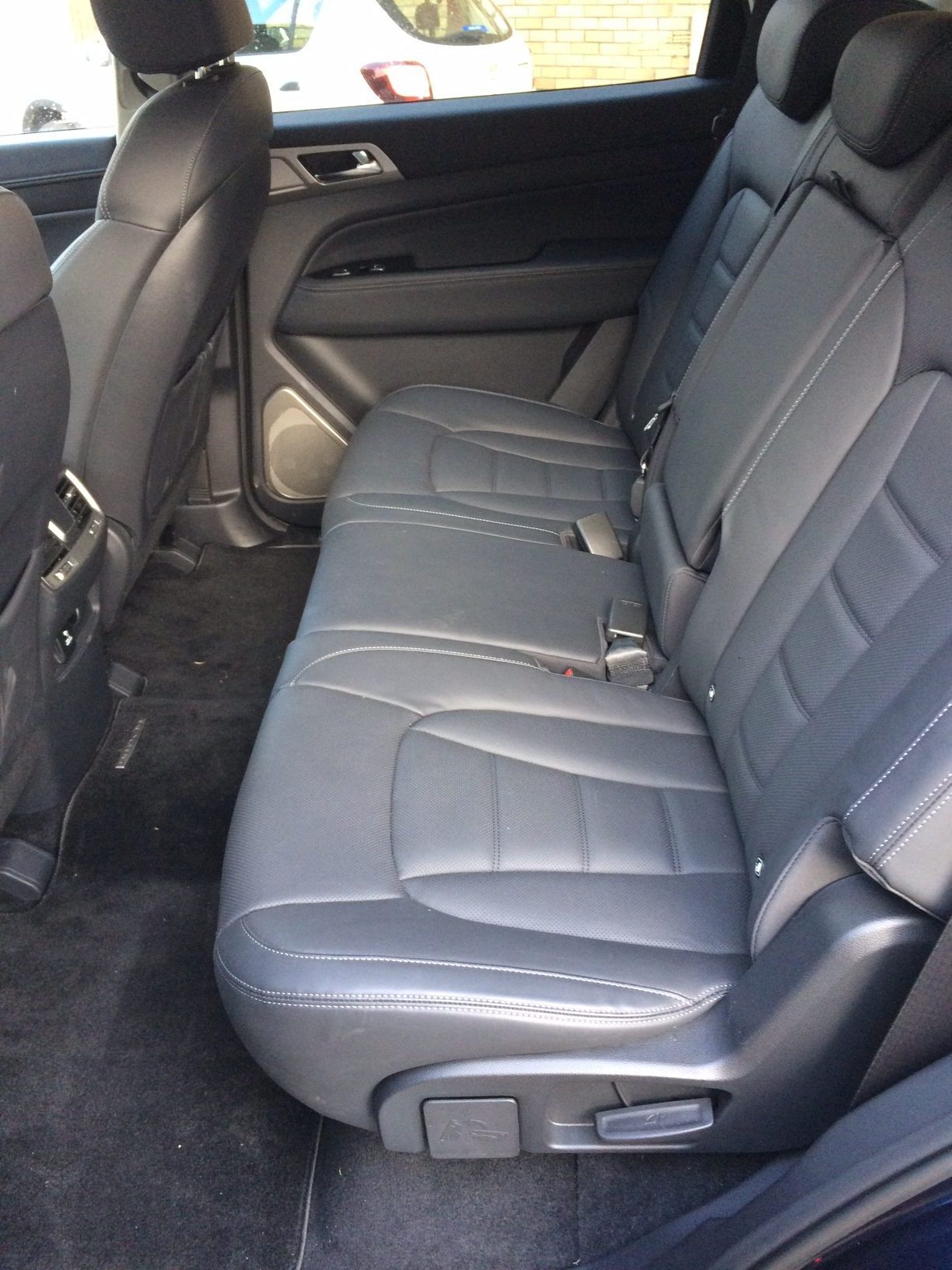 Inside, the size is appreciated with a lot of legroom infront and behind, though the two rearmost foldaway seats lack reach and support and are for very occasional use only. There’s good adjustment on the front pair and a comfortable shape and support. The flatter rear bench type seat does not offer the same location but it is also good at supporting long legs and the headroom is excellent throughout. I liked the high flat loadbed to the luggage area, its shape and capacity which could be gradually increased to over 1,800 litres. Tailboard picnics become more of a family feast in the back of the Rexton.

Its height as you pull up into the cabin often draws comment, as it does when you drop down to exit, but it means you have a very good view of the road and surrounding traffic, the waistline is low, windows deep and both lights and wipers do a very good job.

For the driver, the major controls worked easily and the secondary switches were well set out, with big dials infront and a good sized central console for the infotainment system, impressive heating and ventilation and oddments space. Large door bins and seat pockets added to the family friendly feel of the Rexton.

We only tried it on a mildly demanding off-road course but its good approach and departure angles, wheel articulation and ability to go slowly when needed and rapidly respond when necessary were impressive.

On road you can decide now responsive you want the transmission to be and it will not disappoint, with easy mode selection. 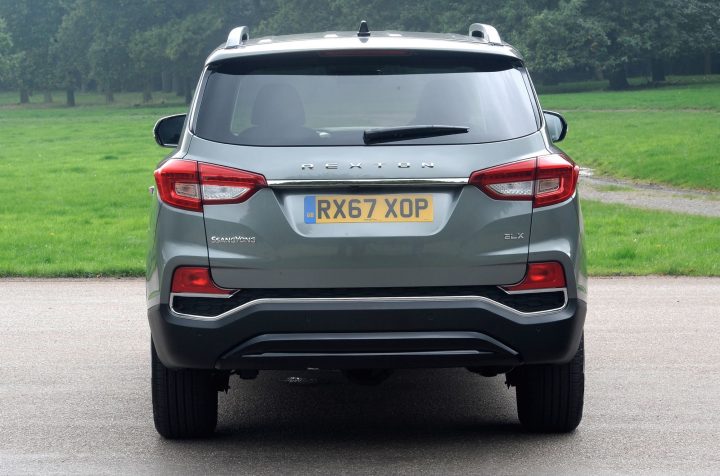 The Rexton can actually stand wing to wing with its German and British rivals in the big SUV class and not look or feel out of place, except you’ll have a lot more money in the bank to celebrate buying one and joining the exclusive country set.