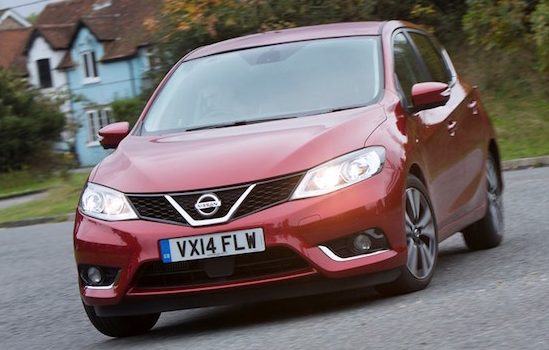 Nissan’s bread-and-butter range has been given a marmalade topping.

The Nissan Pulsar is on paper a five-door family car of good proportions and useful performance, but it’s really more than that.

Originating in 1978 as an enlarged version of the Nissan Sunny, hence the name Pulsar, the latest model was introduced to Britain in 2015.

Pulsar is Nissan’s upper range five-door model and it runs to 15 versions in four trim levels from about £14,000 to £23,000 and there’s a fairly simple range of 1.4 diesel or 1.2 and 1.6 petrol engines with 6-speed manual or CVT gearboxes. So it’s competitively placed and equipped in the market.

Our near top of range model with the most powerful petrol engine and quality Tekna trim was an eye-opener with its refinement and overall performance. Oh for a Nismo model to rush into the range!

But we have to make do with the very competent, capable and surprising 190ps Tekna for now anyway.

The engine has a power output of 240Nm at just 2,000rpm so with the six-speed manual gearbox it pulls well even with a load and it means that motorway cruising is not only relaxed but economical as well. In fact the flexible nature of the engine and carefully matched gear-ratios mean it can return close to 50mpg without too much effort.

Clutch and gearchanges are good so town work is light-duty and the steering has a good turning circle, is vibration free but seems a bit dead when you want it to give good feedback on winding roads. 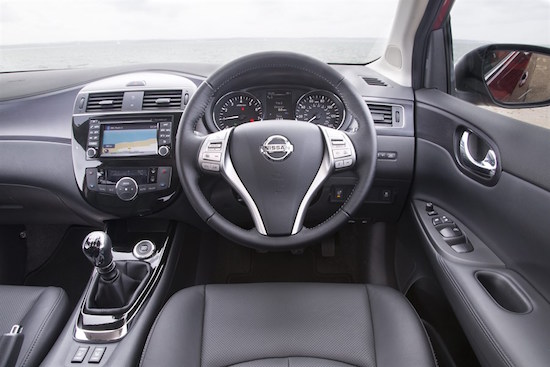 I liked the position and operation of the secondary controls around the wheel and the fascia switches, the reasonably sized instruments infront of the driver and the good info display for essential things. I could not get a completely satisfactory position for the steering column and wheel and this slightly added to my discomfort, however.

Heating and ventilation was simple and effective, backed up by four electric windows, but no sunroof is available. 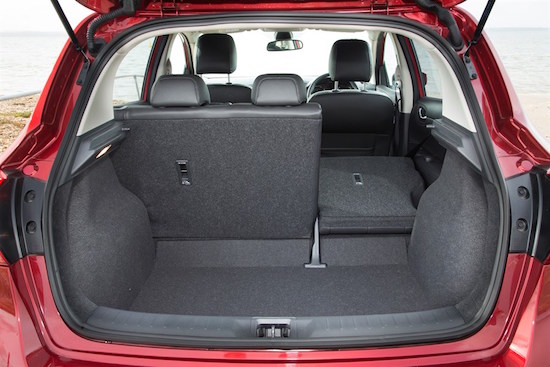 Oddments room was good for a family car whether in the front or back seats, access was easy throughout and the big boot opening had a high lift tail to reveal the 385 to 1395 litres loadspace behind a low sill and 60/ 40 seat split (right).

Visibility was generally good all round and the Nissan camera system both ends is a really useful feature of the Pulsar Tekna to reduce parking prangs, while the headlights and wipers did a good job when needed on the road.

The Pulsar had very good seats which, in front adjusted widely and wrapped around the driver and passenger and gave reasonable support under the thighs if tall. The back seats were flatter but still comfortable.

There was ever-present road noise and a slightly firm ride but it stayed planted on the road and handled well despite the lack of feedback through the wheel. 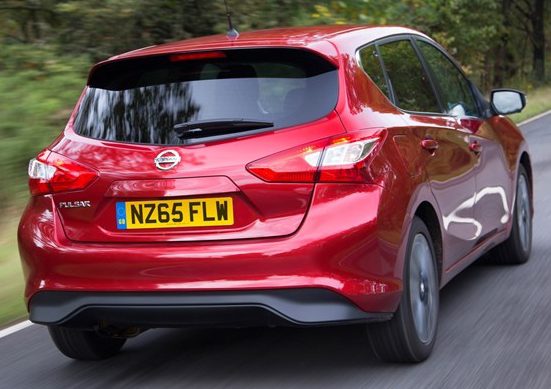 It was quick from standstill and through the gears when overtaking and it settled down to an easy motorway gait when conditions permitted. The Nissan Pulsar 190 Tekna is a surprisingly good allrounder worth considering as a family car.

For: Room, refinement and economy

Against: Dead steering, some road noise