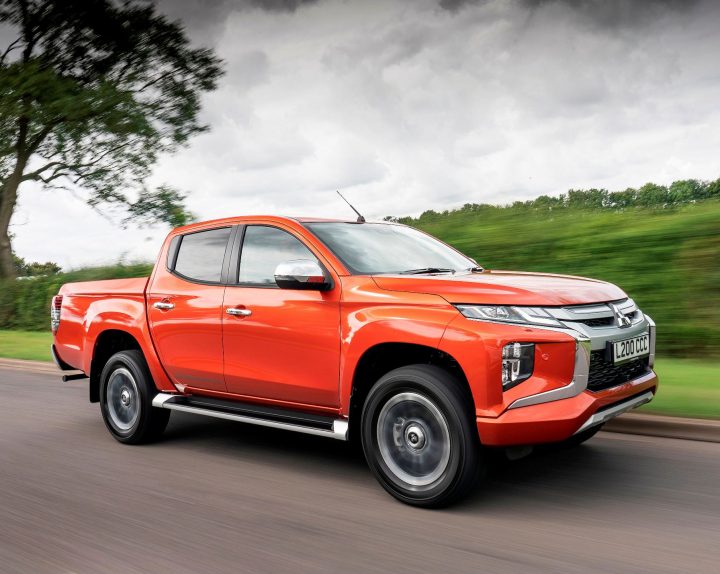 Arriving in UK Mitsubishi Motors showrooms in time for the new registration plate month of September is the new Series 6 L200 Pick-Up range where the Double Cab versions are the most popular for business, hard graft and leisure uses,  writes David Miles.

Mitsubishi say the Series 6 is more advanced in terms of technology and safety, more efficient and cleaner than ever before, quieter and more refined with improved ride and handling plus it’s arguably the toughest looking vehicle Mitsubishi Motors has ever designed and certainly one of the most imposing and rugged pickup in the market today.

For this generation of models no Single Cab versions are available as global sales are too small so the range consists of Club Cab  with two main side doors and the most popular Double Cab 4-door variants and both body styles have five seats and a one-tonne payload.

On the road prices, excluding Vat, range from £21,525 to £32,200.  The range starts with 4Life Club Cab and Double Cab versions with 16-inch wheels geared towards the workhorse market. The Double Cab specification levels, all with 18-inch alloy wheels, are Warrior manual and auto options, Barbarian man/auto models and Barbarian X with a standard auto gearbox.

Predominately I am writing about the best selling Double Cab L200 Series 6 models here and these were the version Mitsubishi unveiled to the UK’s motoring media last week at Silverstone. Not that we were allowed anywhere near the racing track which would have been inappropriate for this type of vehicle, but we did undertake driving on local roads as well as some rallying and off road driving and handling activities. 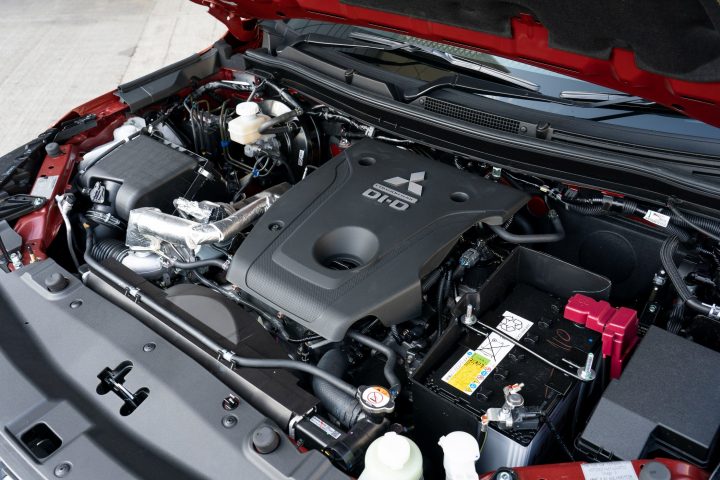 Under the bonnet for all versions is a new 2,268cc, 4-cylinder turbodiesel engine which is fully compliant with the new EU6d Temp and WLTP regulations. It produces 150hp and 400Nm of torque from 2,000rpm and is available with the choice of 6-speed manual or a new 6-speed automatic transmission.

The models have the Mitsubishi Super Select 4WD system which allows easy shifting between 2WD and 4WD just with the turn of a rotary switch which can be done travelling on or off road. Hill Descent Control is also fitted. The automatic gearbox models have new Off-Road mode which control the engine, transmission and brakes depending upon the terrain. This mode can operate in 4HLC and 4LLC high and low ratio settings with its central locking differential

Available for test driving were the L200 Barbarian X top spec model with the new 6-speed auto gearbox. Performance on winding country roads around the Silverstone area, the very first impressions was how much the suspension system had been improved. 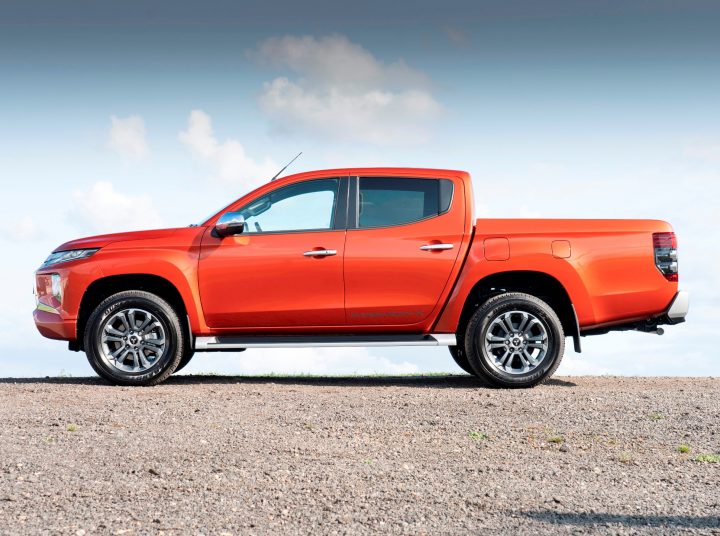 Ride was much more compliant and handling well balanced for such a high riding vehicle. The suspension over undulating surfaces actually felt on the soft-side at times with some front end bounce but with more weight this should even out the ride balance. Steering was light although it needed plenty of turns of the steering wheel for lock-to-lock use.

The new engine, although less powerful than the outgoing 2.4-litre turbodiesel 154 to 181hp units to meet new EU6d Temp and WLTP emission and fuel economy regulations, with 400Nm of torque from 2,000rpm it felt strong more or less throughout its rev-range and quite refined. Top speed is 106mph for the auto and 108mph for the manual models. The usual zero to 62mph acceleration times are not given for commercial vehicles but my timing suggested around 12.0-seconds for the automatic.

The CO2 emissions are a high WLTP 254g/km for the auto and 231g/km for manual gearbox models. This doesn’t affect the road tax and company car tax costs as they are considered commercial vehicles.   The WLTP fuel economy Combined Cycle figure for the auto is 29.1mpg and on my road route the figure was better than that at 31.2mpg. The manual gearbox models have a figure of 32.1mpg. 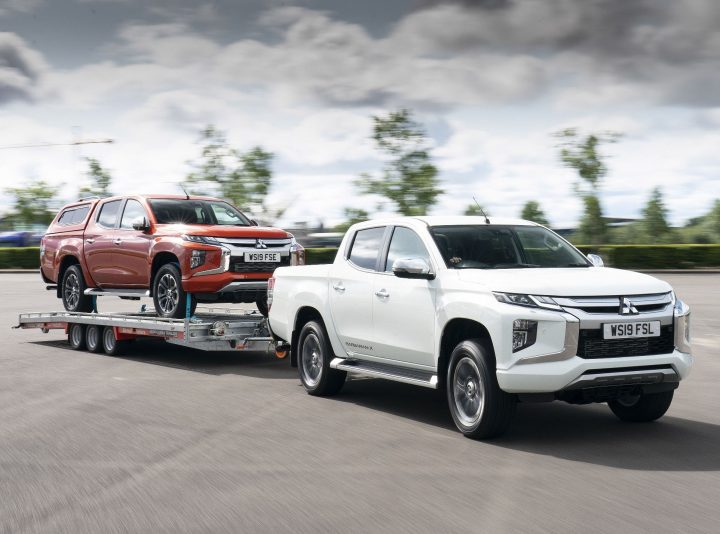 Further testing towing 3.5-tonnes with a triple axle trailer showed the new L200 Double Cab to be a willing workhorse which shrugged off its burden. It again proved just how capable it’s been and still is despite its new engineering refinement when off roading. Most impressive of all was the rallying test driving which really put the L200’s handling capabilities, and we drivers through our paces.

The slalom test just proved that even with a ladder frame chassis and leaf rear springs used for load carrying durability, with all the electronics such as stability and, traction controls and such like, just how capable and safe-handling even in extreme driving conditions the new generation Double Cab is.  The revised suspension system proved to be extremely capable in terms of ride comfort and chassis articulation over rough ground at very high speeds. 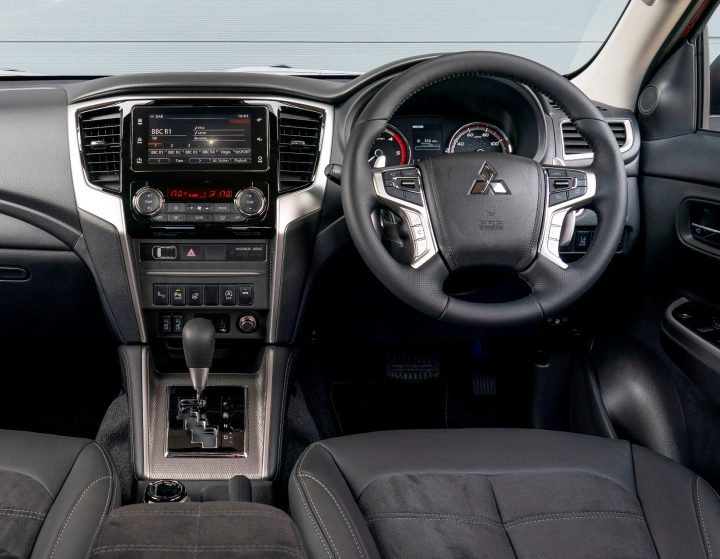 Whilst the exterior appearance of the latest L200 Club Cab and Double Cab models has a far more aggressive appearance, inside it’s rather more of what has been in the past. Yes there is a restyled design for the centre panel of the dashboard with its multifunction display and the gear shift panel has minor changes with chrome effect trim inserts.

There appears to be more soft-touch interior trim finishes in areas like the door cards and fascia trim and there are more storage compartments. 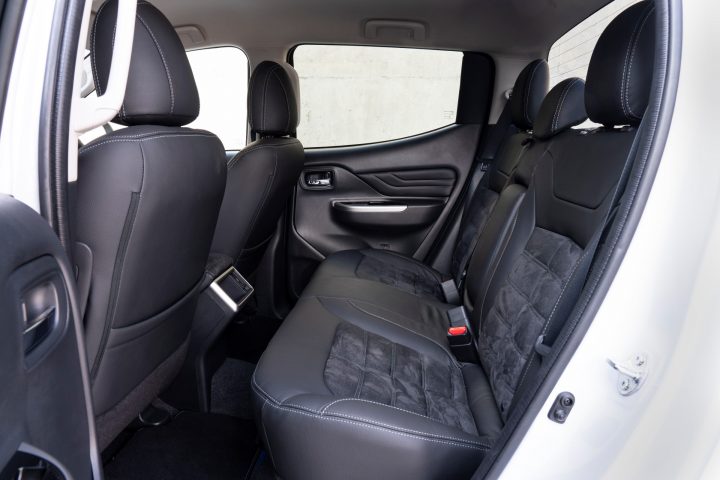 It has the longest cab length in its class so there is ample legroom for five adult passengers but some larger people might find the rear cabin width a bit of a squeeze. Access through the Double Cab’s four side hinged doors is easy but due to its high ground clearance it’s a high step up if not a high step in interior design.

That said it looks well built with very durable upholstery and other trim panels and for such a large vehicle visibility is good. In keeping with new technologies found on passenger cars and SUVs, the L200 Double Cab  in its higher spec levels bridges the gap between it and large SUVs for driver support and safety systems really well. 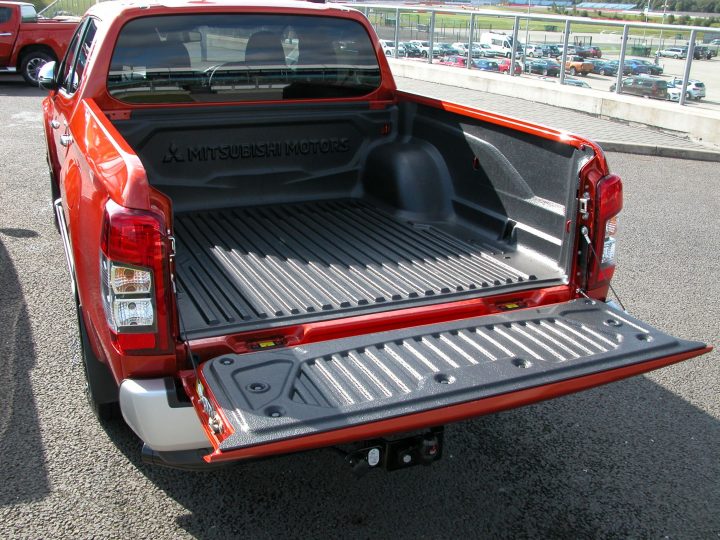 Depending on the spec level there is now a multi-around monitor with four cameras providing the driver with all-round vision of the surroundings, ideal both off road and in car parks where the size of this vehicle can be a drawback. It is big and imposing.

Also included is Forward Collision Mitigation which detects vehicles and pedestrians ahead plus there are new safety functions such as Blind Spot Warning, Lane Change Assist and Rear Cross Traffic Alert when reversing.

The usual air-con, cruise control and electric front and rear windows are also included plus connectivity functions. Unfortunately an integrated sat-nav system is not fitted, you need to link your smartphone nav function to the information system which displays the routing on the touchscreen. In short the latest L200 Double Cab pick-ups are now much closer in specification and safety to conventional passenger cars. 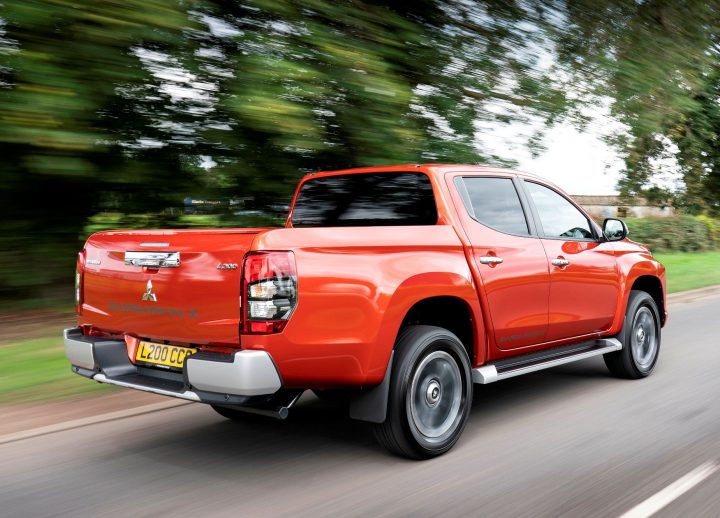 They are less financially painful for company car tax as well because they are classed as commercial vehicles, although driving and spec wise they are now much closer to a well equipped large SUV.  The new generation L200 Double Cab’s a big practical vehicle with big capabilities, and a big step forwards in terms of driveability. Definitely it’s on the right tracks to being the market sales leader again.

Against: A large vehicle so it can be a handful to park in public spaces, no integrated sat-nav system, costly insurance.