While not having a huge range, Mazda has a well-defined line up in significant sectors.

Most people will blurt out MX-5 if asked to name their most identifiable model, so you may be surprised to learn that the crossover CX-5 has been their global best seller since 2014. Over 70,000 are now on UK roads and it makes up 25% of Mazda British sales.

Produced from 2012, in the UK it replaced the smaller Tribute and larger CX-7 and was the first model to introduce the Kodo design language for the styling and their Skyactiv engines which included cylinder deactivation and optimised fuel flow to stretch economy without compromising sportiness. It is fitted over a scaleable platform used for the Mazda3 and Mazda6 and shares their powertrains.

For 2022 the five-door Mazda CX-5 was considerably revised and given new grille, front and rear bumpers and light signatures and there are now five trim levels, SE-L, Newground, Sport, Sport Black and GT Sport, each slightly differently styled to individualise the 20 models.

You have a choice of 165ps petrol (below) or 150ps diesel Skyactiv engines with manual or automatic transmission and 2WD, together with higher output  194ps petrol or 184ps diesel AWD Sport. 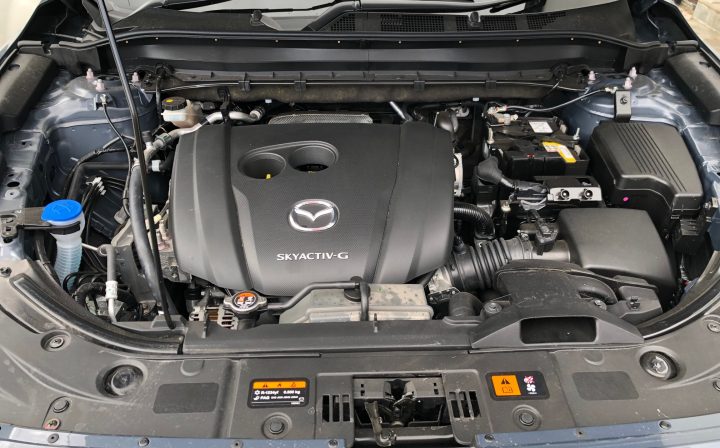 The advantage of the 2WD layout is slightly lower fuel consumption and sharper handling while not missing out on the room or higher riding position of the crossover SUV styling.

The fresh Newground model in the range reflects the changes which have been necessitated by difficulties in the components supply change and steadily rising prices but it’s also given Mazda an opportunity to touch-up the CX-5.

While this is a good level of equipment at a reasonable price, it was disappointing not to see a reversing camera at least in the dashboard display rather than sensors. 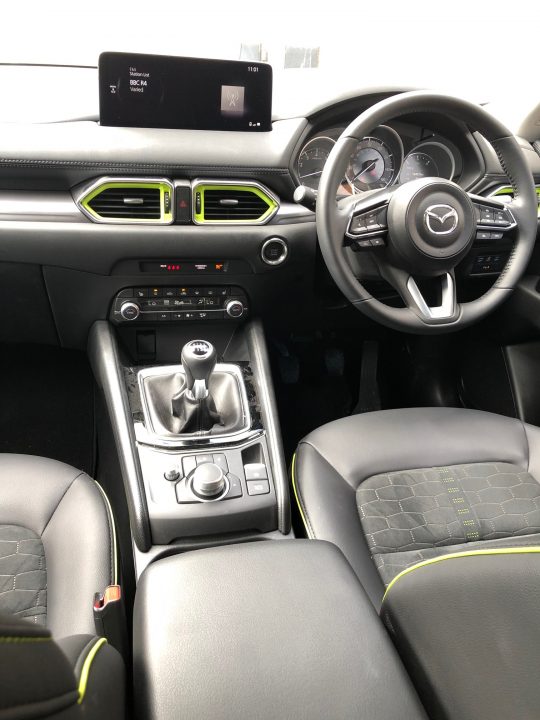 The 2.0 litre four cylinder engine is a modest but pleasing performer with generally low noise level even when stretched. It could not get to 40mpg however and hovered above the mid-30s during our test on main roads and motorways.

The gearing has been set for economy rather than performance and it is one of the smoothest changing manual boxes you can find anywhere with a short-shifting, direct action and long progressive clutch underfoot.

Brakes are easily up to their task with good feedback and power and the parking brake with its auto-release worked well. Throttle action was smooth.

We liked the Mazda CX-5 ride over all surfaces we crossed with very little body roll, pitching or dipping and it had good responses to steering inputs, throttle position and braking, putting us in mind of a sporting car rather than a lumbering SUV which some rivals have become. You really get the best of both worlds in the CX-5, a nicely handling and comfortable family car.

Secondary controls were neatly laid out on wheel-spokes and fascia/ console with the most used immediately to hand and less used a little further away. A multi-mode rotary button and push switches operated the infotainment cluster (below) atop the fascia and it was very clear to use.

A triple set of dials directly infront of the driver conveyed engine and road speed, fluid levels and computer selected data in a very clear and well defined manner (below).

Heating and ventilation was covered by switches on the central console and the system worked well with good markings and effective output, direction and temperature controls (below). 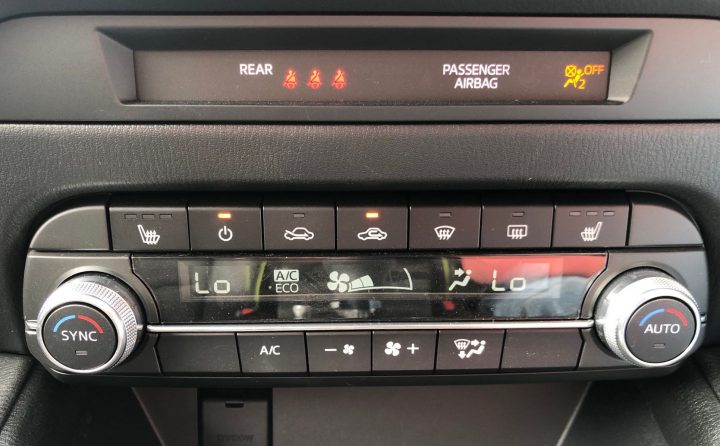 The amount of oddments space was good for a family car with door bins all round, seat back pockets, big glovebox and console trays and bins while the easy to access, load and unload boot included a useful reversible/ removable  floor board over another compartment suitable for damp or wet gear. However, there is no spare wheel, just an emergency inflation kit, which is not to every driver’s delight. 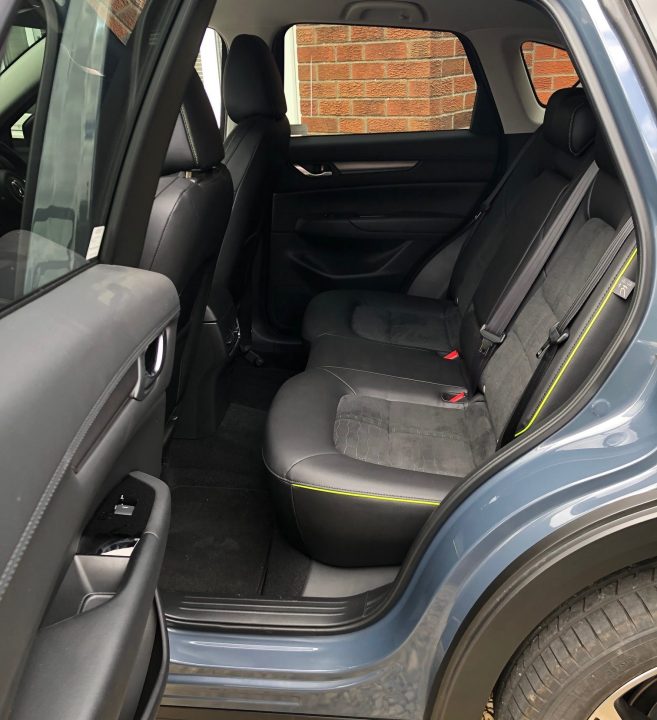 Access to the cabin was extremely good with very wide opening doors, as much as 90-degrees in the back (above), and once settled the head and legroom was good. The rear seats have a 40/20/40 split for greatest practicality. 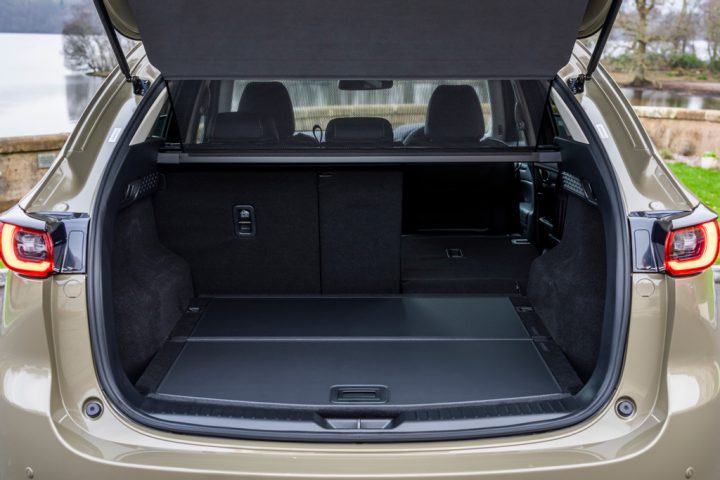 Visibility was generally good and the sensors filled in what could not be directly seen but I feel a camera would offer greater reassurance to more nervous users. I liked the big wipers front and back and the long range, wide beam of the automatic headlights which did not dazzle oncoming vehicles.

While engine noise was muted, the road rumbles and suspension movements provided a constant soundtrack to every journey, but they are quieter than in many similar sized cars. 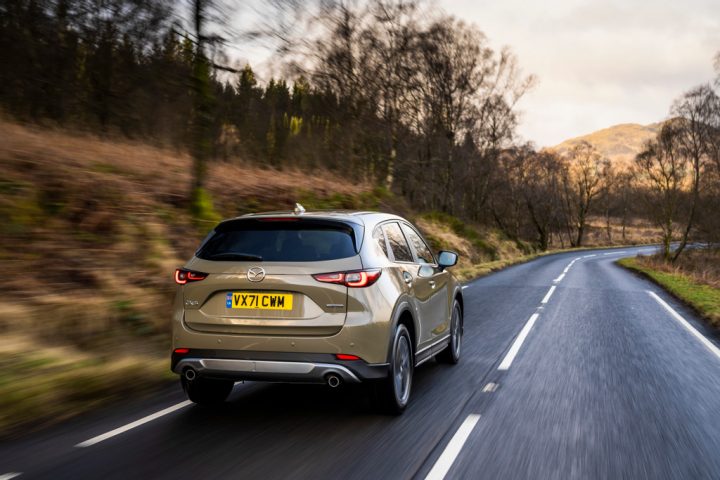 This is unashamedly a family car and its 2WD transmission might rule it out for some duties and conditions but it has reasonable ground clearance and a respectable turn of speed, was unstressed on a motorway, adequately roomy and very comfortable.

I only wish I could have seen better economy as today’s fuel bills rapidly mount and it may be ruled out by some buyers on this point alone.

Otherwise, there is little else to pick over or hesitate in praising. 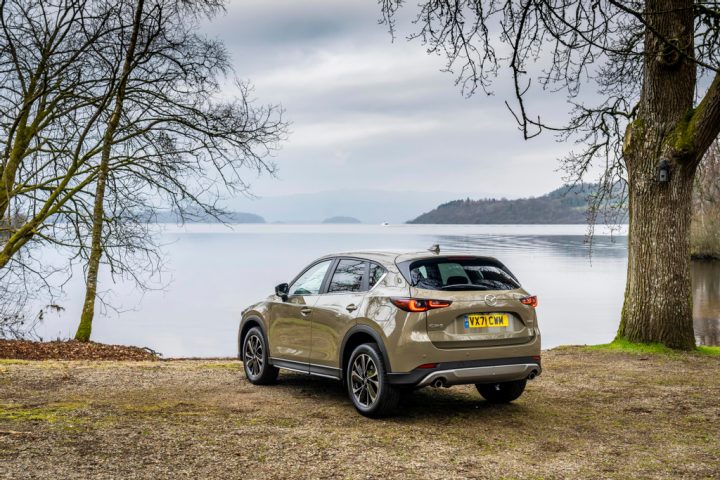