KIA has risen to become one of Britain’s most popular range of models and the family-friendly Ceed has a lot to do with that, last year helping them pass 100,000 UK registrations over three decades.

After the Sportage and Niro the Ceed is their most popular model and takes about 10% of sales as a coupe ProCeed, Sportwagen semi-estate, hatchback or the SUV XCeed we tested and facelifted for 2023.

Essentially there are four models, each in standard or premium trim, from about  £23,400 to £31,000, fitted with the same petrol engine and transmission in grades 2,3, GT-Line and GT-Line S. At the time of testing there was no automatic in the range. 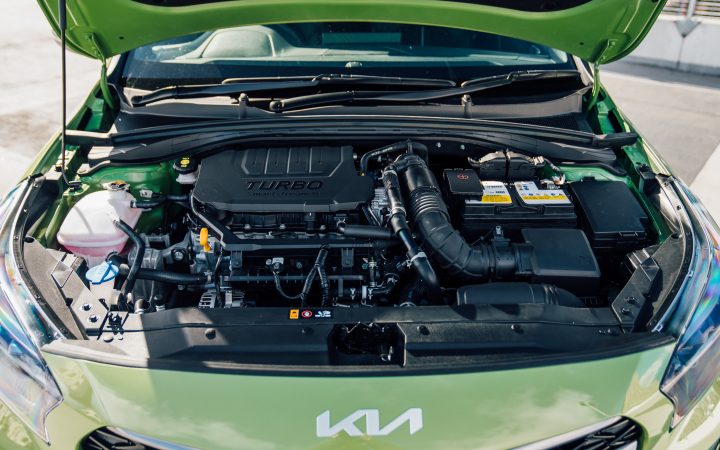 Designed in Germany and built in Slovakia, the Ceed family fits the bill for most drivers and KIA has consistently upgraded and improved the series, winning national awards along the road to its success.

For MY2023 the XCeed was given higher performance and newly shaped LED lights front and back with a new rear diffuser to smooth airflow, while inside there are changes to the fascia and instruments which effectively carries over elements from the new Sportage and Niro models and presents a very sophisticated yet discrete display. 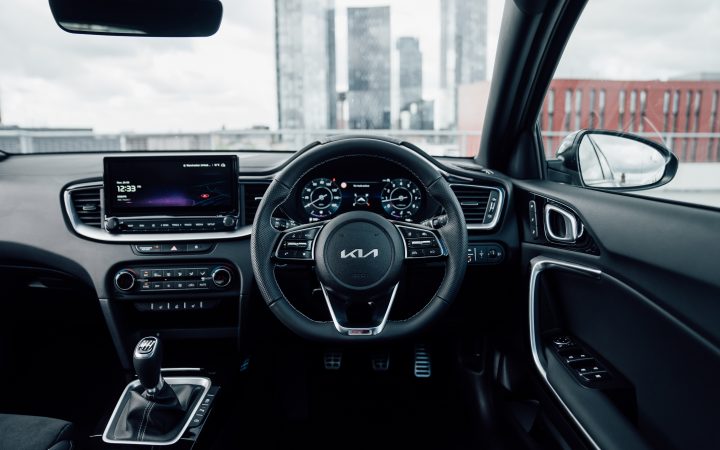 KIA has simplified the touch-screen without losing its effectiveness and clarity and now fitted sensitive touch buttons for the audio volume, heating and ventilation on the lower fascia where most likely to be used by driver or passenger. It’s a wise move and less distracting than used through a screen.

The seamless appearance of the new dashboard adds to the apparent width and room inside, and in reality it is spacious for a family car for five. Access was good throughout, including from the boot area and with its easy-fold rear seat backs to triple total capacity at a touch behind the powered tailgate and with its variable setting. 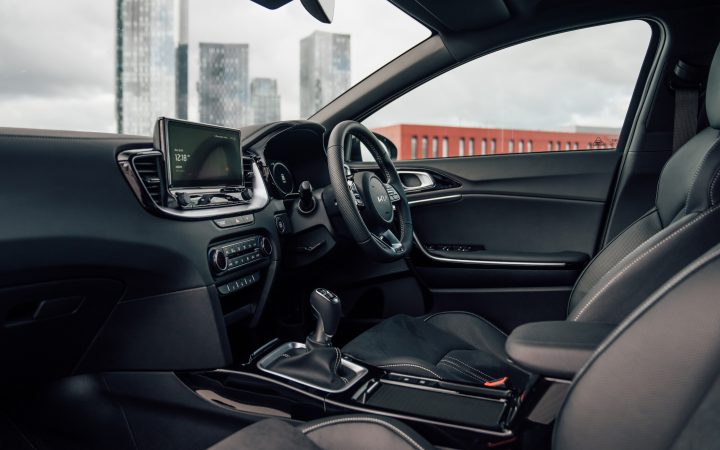 Once inside, the deeply padded, well shaped seats securely held occupants and those infront had a good wide range of reach and rake adjustment and the designers have raised the seat height to improve vision all around.

There’s more oddments room throughout as well, welcome for families who carry a lot with them and teenagers who may grudgingly come along and play with their phones in the back where there are power sockets to help. 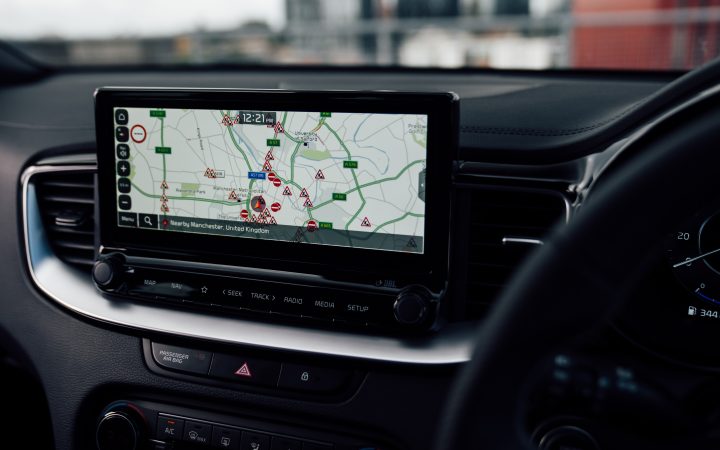 For the driver everything comes directly to hand and foot, the usual column stalks operate smoothly, buttons on the spokes are light if small and the pedals are well spaced, but I found the clutch travel was long and not as progressive as I would like. Gearchanges were short and precise by contrast and the steering was neatly balanced for assistance and feedback with a good turning circle as well.

Roadholding was good for an SUV with little pitching or rolling, handling was sharp and there were no vices to concern me.

While the near 1.5 litre engine is reasonably powerful and very smooth, it does lack some get up and go when loaded and you find more frequent changes are required to make good progress across country, although it looks good on paper and it is very composed at motorway speed. 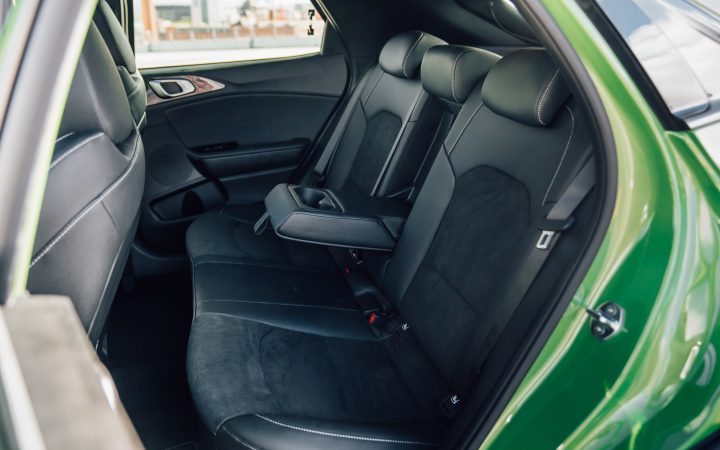 Bad surfaces do show up how well the suspension copes with front struts and rear trailing links but the noises from them and the tyres can be intrusive. Wind and other mechanical noises were vey low.

Big windows, high set seats and a lot of sensors and camera aid vision all round so its very easy to park or place through corners. 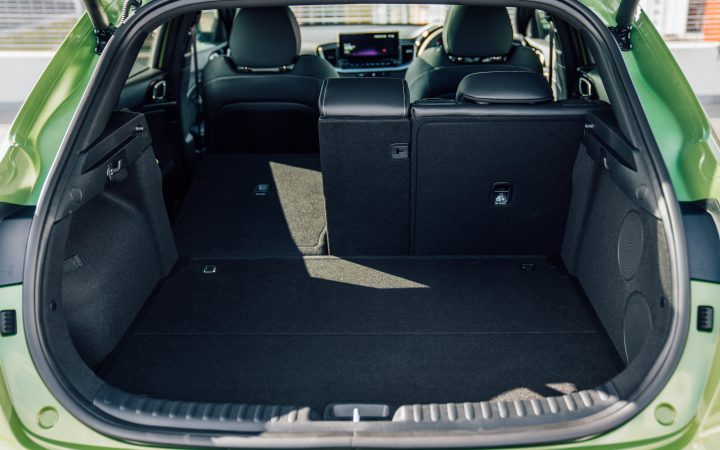 KIA has done a very good job updating their popular XCeed and its refinement and sophistication really put it into a higher class than you might expect. 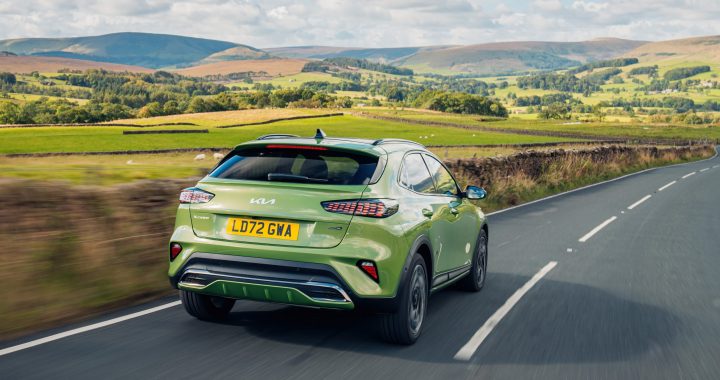