Britain is a very lucrative if sometimes specialist car market and that’s what newcomer Genesis is counting on with a small model range which includes the G70 Shooting Brake.

This semi-estate designed for the European market and no-where else appeared in late 2021 alongside a saloon and two larger SUVs with simple choice of petrol or diesel engines. The G70SB can be specified in any of three trims and the upper level with the most powerful engine get four-wheel-drive as opposed to the standard rear wheel drive transmission. 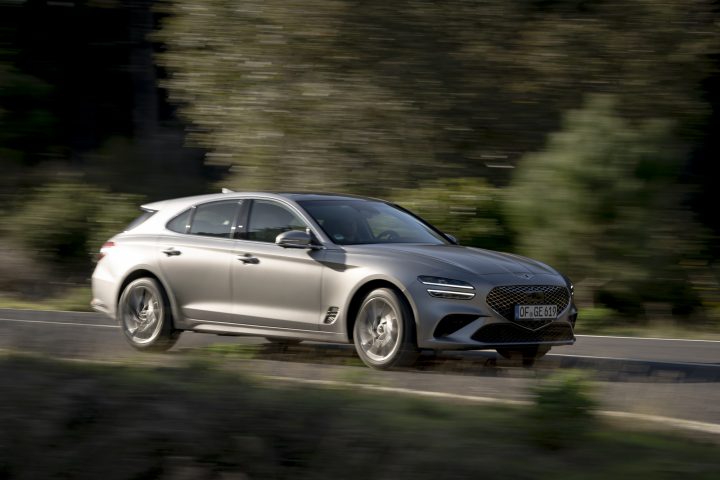 The standard price of the G70SB is £40,700 but ours came with the Innovation and Comfort Packs, nappa full leather seats, electric sunroof, Lexicon audio and matt silver paint finish, adding nearly £10,000 to the list price.

Aimed squarely at the best semi-estates from premium brands in Britain and Germany, the Genesis G70SB is very sleek and head-turning especially in the matt grey finish.

While every other manufacturer has a hybrid in its range, it was strange for Genesis to launch only pure petrol or diesel engines as a newcomer and considering it’s the premium brand of the Hyundai Group they have not utilised the bigger V6 petrol engine from the Kia Stinger. 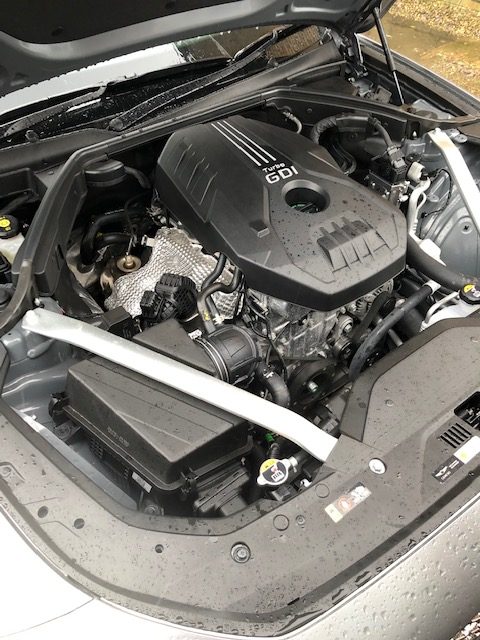 As it comes, the beefy 241bhp engine gives it respectable performance, particularly two-up, but you have to work it to get that out and the downside is heavy consumption. We never got over 30mpg and with a heavy load it was making frequent automatic gearchanges hunting for the best of the eight ratios it could utilise, which possibly accounted for the low economy.

Unless you really floored the throttle, gearchanges were smooth and imperceptible and the driver has paddles on the column to explore the power potential for any situation.

Steering was a little dead to the touch but the turning circle was good and assistance was progressive as it diminished with speed so it was not twitchy or too light on motorways.

Underfoot, the brakes really hauled down speed in an impressive and unchallenged manner with excellent control and feedback and the parking brake securely held the test car on slopes or in traffic.

The front strut and rear multi-link suspension is straight out of the good handling recipe book and kept the car firmly planted on the road over any surface and twisting section of tarmac however it was loaded. Near neutral handing kept us out of trouble and there was no undulating floating or wallowing on secondary roads.

The all-wheel-drive transmission means all available power is well distributed and put down on the road and inspires confidence on some very wet, wintry roads.

In sheer performance terms the Genesis G70 SB was safe and surefooted, with average acceleration and a higher top speed ratio for the unlimited German motorways. This meant it happily and easily cruised at the UK limit and really felt at home gobbling up the miles day after day. 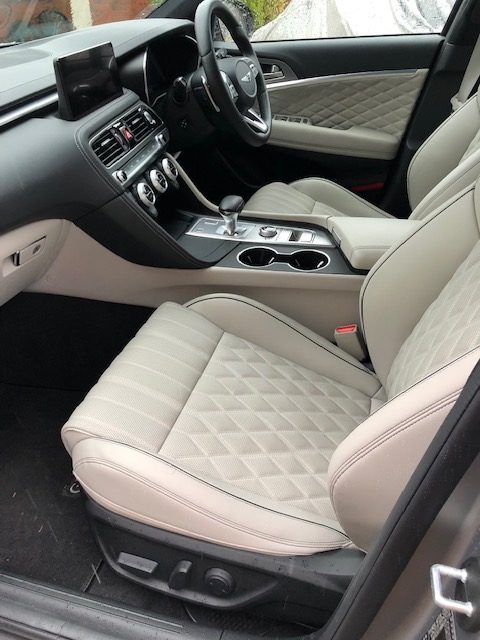 So it was just as well the interior was a very comfortable place to be with excellent access through the four doors and automatic high opening tailgate, even if the rear legroom was a little short for taller passengers. Infront the seats adjustment range was good and their shape fully supported occupants while the heating and cooling features would be welcome alongside the heated steering wheel for a driver on a cold day. 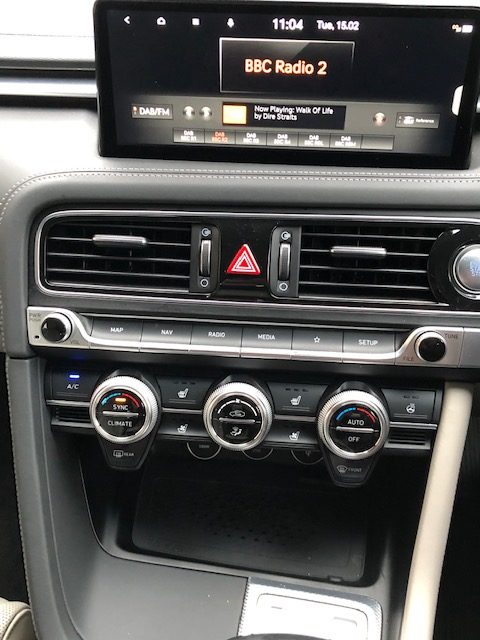 The air conditioning was simple, with separate controls to the touchscreen function on the central display and it was highly effective and quick to change, supported by powered windows and an electric sunroof and glass screen on the test car. 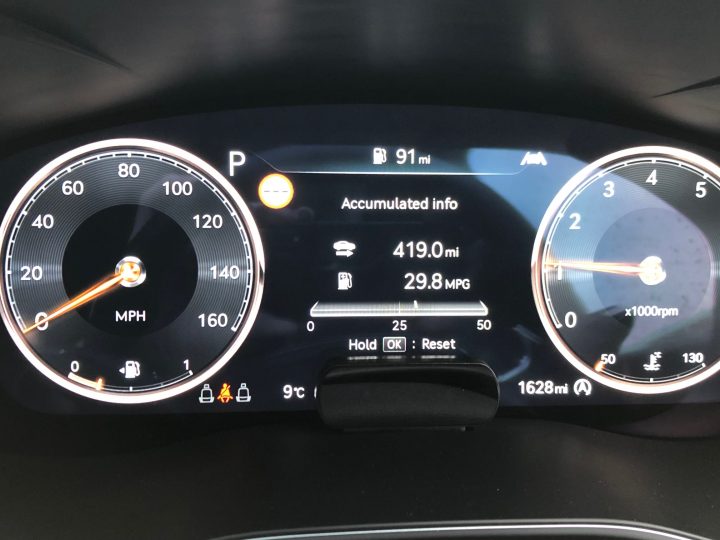 The driver has a simple instruments’ display directly ahead, a head-up display as well, and changes to the eco, normal, sport or sport+ modes of the powertrain are picked up by colour mapped dials to emphasise the settings.

Every minor and major control fell straight to touch and the clarity of the driver’s display and the selectable infotainment display in the centre was excellent. The Lexicon entertainment system was high quality, easy to navigate with superb output and clarity, while phone integration was straightforward and quick. 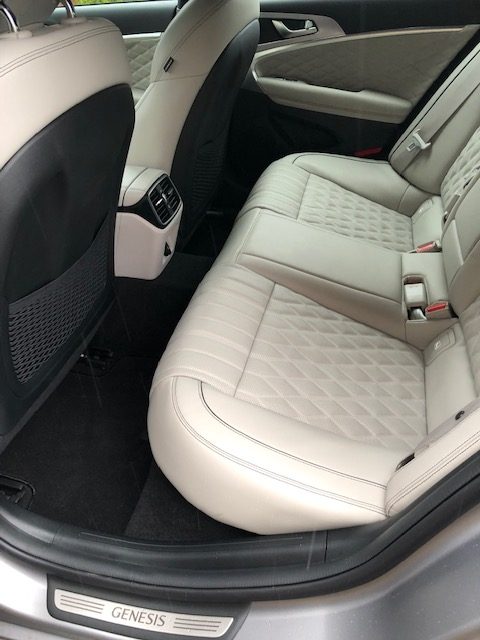 Excellent cameras and sensors all round the G70 SB provided unobstructed vision when parking or simply driving along and headlights and wipers were high performance and very effective.

The sophistication inside was relaxing and made all the better with very low noise levels from the powertrain, suspension or airflow around the car at speed. 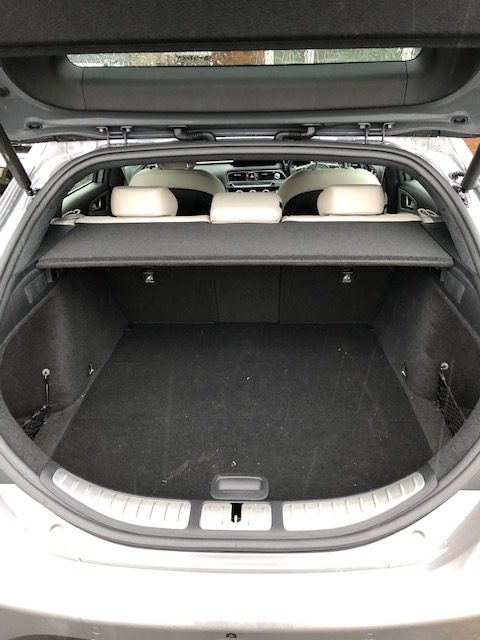 Everything about the Genesis G70 SB oozed refinement and class and for a first attempt at the UK market it’s a very strong entrant.

Once they take a serious pitch at slashing the engine’s emissions and extending its economy the brand will have a winner on their hands backed up by a unique retailing model where they come to the customer and deliver good old fashioned service. Remember that?