There’s an enormous range from under £14,000 to over £23,000 with a choice of 5 trims, two body-styles, petrol or diesel engines with automatic available and you know its going to be in demand when you want to sell.

Despite its dominance of the city-car sector, Ford cannot resist dabbling with the Fiesta and the ST Line is the latest marketing attempt to give a sporting attitude to a what is essentially a shopping car.

But that’s not a bad thing in this Fiesta. The ST-Line enhancements put a body kit around the car, stick in front foglights, put on unique alloys and badging while the inside comes with special red-trimmed sports seats and pedals.

Less obvious is a carefully reworked firmer suspension, sharper steering and more responsive brakes. It is a good package for the Fordie who would love a hot ST but only needs a mild version.

The engine pushes out just 94gkm so it get a beneficial green tax concession and what it lacks in outright power, which becomes apparent at times, it compensates with good economy without trying.

The Fiesta ST Line with the 95ps engine is not quick off the line or through the gears, but it has a respectable turn of speed, holds the national speed limit without difficulty and is fairly quiet as well.

A long travel clutch came with a short changing gearlever but a few times I wanted a sixth gear to be available as the engine seemed to be working harder than necessary, although its consumption suggested otherwise.

The Fiesta is an agile car with a moderately weighted steering system, a good turning circle in towns and satisfying feedback on more open sweeping roads.

Secondary controls are close to the wheel in most cases and there are some additional buttons but they are not clearly marked for night use.

I liked the simple, large and clear instruments and calibration and the heating and ventilation was straightforward and effective, with powered windows to back it up.

Oddments room was modest with a smattering of small compartments throughout while the boot was also small and you had to drop down the seat backs to achieve a good capacity.

Access for driver and passengers was very good in the five-door and the room was reasonable with well shaped as well as attractive looking seats. The front sporting derived seats had good side bolsters and location but some taller people might find the travel restricted in front.

Visibility was clear from the driver’s seat with good lights and wipers for poor conditions and thin roof pillars. Some shorter drivers may, however, find the up-sweeping profile and small back window would create blindspots when reversing in particular but also when pulling out from a parking space.

On the move, the Ford Fiesta ST-Line was simply a joy, even if it was not rapid, because it handled responsively, turning and braking with confidence and it held onto the road without a moment’s concern. There were no real vices to its character. 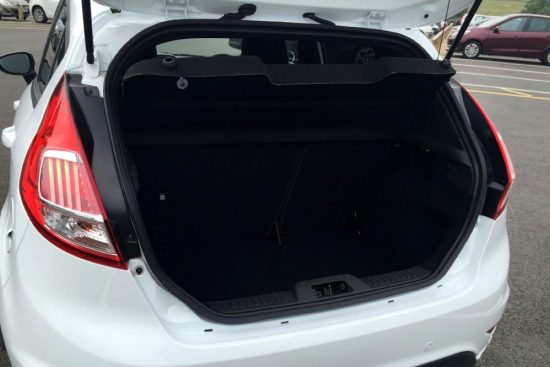 We enjoyed a generally smooth ride even if some bumps came through the system into the car but you could always hear the suspension working away as noise insulation is not a strongpoint of the Fiesta.

In conclusion, the Fiesta ST-Line is a worthy addition to the range, looks different to the rest of the line up and offers a comfortable environment so long as you don’t want to go anywhere quickly, but in style.