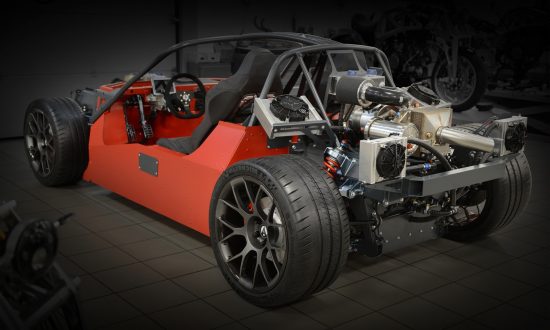 In just nine years all new cars sold in the UK will have to be fully electric, or in some cases still to be clarified, hybrid.

But where does that leave the specialist car companies of Britain, who have shaped a disproportionately large part of our nation’s automotive identity?

Electrification poses a number of challenges for makers of specialist cars, most notably the weight and cost of the batteries, as Graham MacDonald, CEO of Caterham, is first to point out.

“The whole ethos of the Seven is to add lightness, and the battery packs add somewhere in the region of 300kg which would kill the handling characteristics of the Seven. We know the advantages of electric powertrains, but it just doesn’twork.

Cost is also a driving factor says MacDonald “We don’t have the skill or budget to develop our own electric powertrain and while electric powertrains doesn’t fit the ethos of Caterham now, I have no doubt that it will do in the future.”

Others are taking a more proactive move towards electrification, including Ariel (above). Simon Saunders, founder of the reborn Ariel brand, has already shown great interest in electric vehicles and is aware that it would be dangerous to do nothing.

“We are involved in several multi-million-pound projects working on EVs, battery packs and control systems” explains Saunders. “Many of the jumps in technology come from small technology companies like us, who can adopt this technology quickly and in low numbers, start a supply chain and introduce cutting-edge technology to the market.”Ultimately, says Saunders, “those who can’t move with requirements and legislation will die.”

Morgan is taking a less drastic approach to its evolution, despite having already shown the fantastically steam punk electric Three-Wheeler EV3 (right).

Steve Morris, chairman and CEO of Morgan, says the company that was once famed for refusing to change the way things were done is now focussed on an electric future.

“Models like the EV3, which is not yet planned for production,” says Morris, “have proven that there is genuine demand for an electric Morgan. The EV technology within the marketplace is evolving at such a speed, we are assessing a number of drivetrain solutions and opportunities.”

There are other factors to consider, too. Understandably, whether in private or in the open, many of these manufacturers hope that the government can be persuaded to extend the deadline or even provide an exclusion to niche car makers.

MacDonald says Caterham is particularly hopeful about continuing with a traditional petrol-powered offering, if legislators will allow. “If we can canvass the government and say ‘look, the reality is that the cars are noisy and arguably dirty, but they get driven under 2000 miles per year – can there be an exception for low volume cars?’

Some suspect the move to electrification in the mainstream could see car enthusiasts buying more specialist models. After all, if everyday cars become more uniform, finding an outlet for motoring fun is potentially far more likely to come from a low mileage ‘hobby’ car.

Arguably more problematic than the powertrain technology is the charging infrastructure needed to support cars. Take the challenging environment of a motor racing circuit. Can the largest venues, never mind the sort of grass-roots locations often used for track days in the UK, afford the infrastructure needed for routine super-rapid charging of multiple vehicles?

However, beyond the issues of weight and cost, all agree that the benefits of electric propulsion are clear and considerable. As Ariel’s Simon Saunders puts it, “It’s not just a case of taking out the ICE and fitting a motor. Electrification can open up a whole new kind of performance.”