You are here: Home / Featured / Two-wheeler stars at WRGB next week 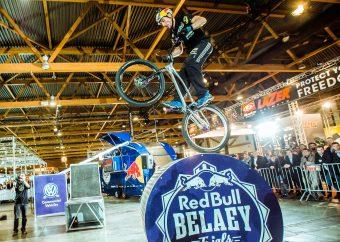 World Rally Champion Sébastien Ogier will not be the only multiple world champion in high-flying action at this month’s Wales Rally GB 27-30 October.

Two of the biggest names from global mountain biking – elite athletes Kenny Belaey and Gee Atherton – will also be wowing the crowds.

Legendary trial biker Belaey (pictured) aka The Magician, has been at the cutting edge of his sport for than a decade. To date his glittering trophy cabinet is home to no fewer than nine world titles, six World Cups and four European crowns.

Now, courtesy of Red Bull, the Belgian daredevil is bringing his spectacular ‘Pedal to the Metal’ freestyle stunt show to the busy Rally Village in Deeside on Friday.

With the school break in mind, accompanied children aged 15 and under can wonder at Belaey’s antics at the RallyFest and follow Gee’s progress on the competitive stages in the forests free of charge. Visitors of all ages are freely admitted to the Rally Village in Deeside, Flintshire.