You are here: Home / Motorsport / 2022 / Triple bid by Hirst this weekend in Wales

Matthew Hirst will be targeting an unblemished hat-trick of wins in the 2022 Motorsport UK Pirelli Ravenol Welsh Rally Championship when he contests the Plains Rally on Saturday. 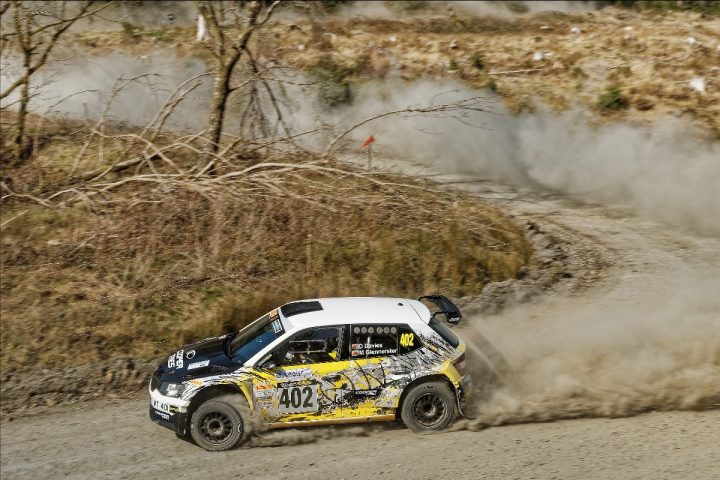 Dylan Davies has been Hirst’s nearest rival on both rounds this year and is second in the drivers’ standings, six points behind. His Škoda Fabia R5+ hasn’t been so sympathetic on tyre wear and a lack of traction has hampered the Llanon driver’s progress, but he hopes for improvements as he and co-driver Mark Glennerster aim for their first win of 2022.

Tom Llewellin arrives at the Plains Rally third in the overall drivers’ standings. The 2019 Welsh Junior champion’s first full season in the Brace’s Bakery Mitsubishi Mirage has started well and he’s quickly gaining confidence in the car. Dale Bowen, who partnered Tom on the opening round, returns to the co-driver’s seat.

James Giddings also had a fantastic result on the Rallynuts in his first appearance in his newly acquired Group N Fordpad Mitsubishi Evo 9. Co-driven by Aled Davies, the former Fiesta ST Trophy and Citroën C2 Challenge champion should go well on the Plains too.

Bob Morgan has made a great start to the 2022 Welsh Championship and currently leads the Ravenol Challenge and is fifth in the overall drivers’ standings in his Winner Garage Škoda Fabia R5+.

Benj Ceen has been one of the revelations of the season so far. In only his first year in a four-wheel drive car, the former Renault/Alpine Formula 1 test engineer has scored two fantastic results in his Ford Fiesta R5 and arrives at the Plains Rally sixth in the overall drivers’ standings and third in the Ravenol Welsh Challenge. The car is run by MSL (which is owned by Mat Long, who is married to Benj’s sister and four-time Welsh Under 25 championship winning co-driver Sarah Ceen) and the results have been achieved despite the car running with an Evo1 spec 32mm restrictor and over 30bhp down on the other Fiesta R5s.

Benj’s father Richard Ceen has been troubled by sensor failures and his Ford Focus WRC05 engine stalling at every opportunity this year. With over six minutes lost on the first two events, he hopes that as a former instrumentation engineer he can get the problems fixed to enable him and co-driver Alun Hayward to enjoy a clean run on the Plains.

Richard’s slightly younger brother Bob Ceen is having a good season. The 2001 and 2015 Welsh champion has successfully switched from a Subaru Impreza S9 WRC to a right-hand drive ‘National spec’ Ford Fiesta R5, which has been transformed by MSL and has run faultlessly so far this year.

Simon Rogers/James How will be aiming for a more trouble-free run having driven around several problems so far this year in their Mitsubishi Evo 6, while Dave Tomlin/Keith Ashley will be hoping to bounce back from beaching their Axon Ford Fiesta R5 – a simple case of running a bit wide ruining a good run last time out on the Rallynuts Stages.

One of the most experienced drivers in the Welsh field will be Wug Utting, who contests the Plains Rally for the 17th time! He’ll be co-driven by Bob Stokoe in their Subaru Impreza N12b. Also back in his Green Paw Subaru Impreza will be Paul Walker, this time partnered by Geraint Thomas.

Ashley Davies/Sam Fordham arrive in Bala leading the Welsh 2WD class having finished second on Rally North Wales and first on the Rallynuts in their Burton Power/G&B Finch/Deranged Trucks Ford Escort RS. Boyd Kershaw/Keegan Rees have also won their class this year, but fifth on the Rallynuts sees them five points behind in The Flying Kiwi Escort Mk2.

Kevin Metcalfe (co-driven by Ian Jones) is the top placed BMW driver and is just one point behind Jackson in his 3-litre BMW E30.

The incredibly close Restruct Welsh Historic class battles will resume on the Plains, with the top three registered finishers in each class giving themselves a chance of winning the end of season David Stokes Historic Challenge for drivers and the Guy Weaver Award for co-drivers’ awards.

Matt Edwards/Hamish Campbell head the Historic class W8 after two victories in their Pirelli-shod Fiat Abarth 131. The development work done to improve the RSD-prepared car came good in the afternoon of the Rallynuts Stages, and if that pace and reliability continues on the Plains then the three-time British drivers’ champion will be hard to beat.

Nick Elliott quickly reacclimatised to his own Fiat Abarth 131 on the Rallynuts, having not driven it in competition for over three and a half years. Now that he’s stopped driving it like his Escort RS1800, Nick and co-driver Peredur Davies should be on the pace from the word go this time.

Having finished second in class twice, Neal James/Kevin Jones (Escort Mk2) take a 19 points W7 lead into the Plains Rally. David Roberts/Gerallt Davies won the class on the Rallynuts in their Cwm Engineering Ford Escort Mk2 and Ben and Stephen Smith did likewise on Rally North Wales, while Peter Hinton/Lewis Sim are also capable of winning the class – although head gasket and suspension issues have prevented them scoring a top result this year in their Escort Mk2.

Julian Birley/Emyr Hall (Talbot Sunbeam Ti 1600) have a great opportunity to recapture the lead of the Historic W6 class after missing the Rallynuts.

Liam Griffiths (co-drive this time by Andrew Sankey) will be aiming to extend his 24-point lead at the top of the OnThePaceNote.co.uk supported Welsh Junior points table in his Discover Parks Ford Fiesta ST.

This brother Callum Griffiths finished on the Welsh Junior podium last time out in only his second ever rally and he’ll be aiming for another good run with co-driver William Lewis in his Discover Parks Ford Fiesta ST.

Gethin Price/Matthew Baddeley lead class W3, although the gap has been closed thanks to a non-finish last time out in their Keith Price Haulage Nissan Micra. Hefin Lloyd-Davies (co-driven by Rich Jones) returns, having won the class on Rally North Wales in his Jones Bros Engineering Vauxhall Corsa. Meanwhile Dave Brick (Vauxhall Nova) and Freddy Brick (Opel Corsa) will be aiming for their first championship finish of the season.

Having scored maximum Road Rally class points last time out, Brynli Thomas/Steve Griffiths will be looking to take the lead of the category in their Peugeot 306 Rallye.

Martin Walters/Marie Fletcher have made a successful return to rallying after spending the past two years rebuilding their Honda Civic and head to the Plains aiming to extend their class W10 lead.

Organised by Knutsford & District Motor Club, the 2022 Plains Rally will see the first car leave the start ramp at 07.01 on Saturday 21 May from the Penllyn Leisure Centre in Bala. The event will contain two high-speed passes of Aberhirnant, Llangower, Alwen South, Alwen North and Clocaenog forests and after all 10 stages/44 stage miles have been completed the finish will be back in Bala from 15.00.

The FIA World Rally Championship celebrates its 50th season in 2022 and this week’s Vodafone Rally de Portugal forms the centre-point of the half-century festivities.

The biggest ever gathering of world rally champion drivers, co-drivers and team managers, including Walter Röhrl, Carlos Sainz, Marcus Grönholm, Petter Solberg and Miki Biasion, will attend a series of events and a gala dinner for 250 VIP guests.

Almost 30 classic cars will be on display in the Matosinhos service park and at other locations around the route during the rally.

The super special stages at Coimbra, Lousada and Porto-Foz will host a parade of cars ahead of the rally action. Additionally, a small number will be driven through Sunday’s legendary Fafe stage between the two competitive passes – headlined by double world champion Röhrl in an Audi Sport Quattro.