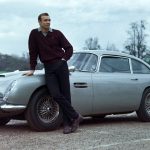 Bond films are the ultimate British classic. It's car chase sequences are the stuff of legend and the new film, No Time to Die, coming out at the end of this year is full of expecation for fans Over the last 50 years, all James Bond films have become a true cinematic icon known around the world since the first film appeared on the big screens in 1962. The unique character of James Bond is now … END_OF_DOCUMENT_TOKEN_TO_BE_REPLACED