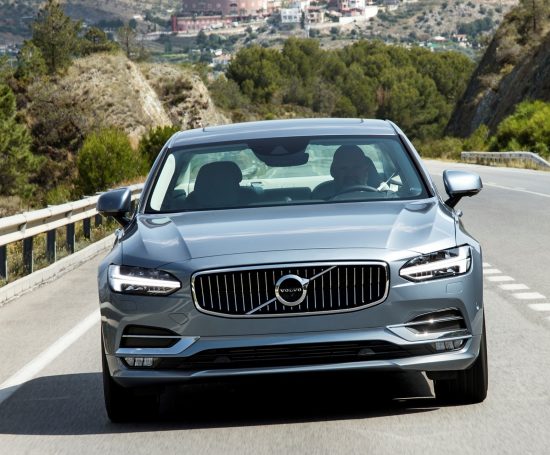 And it’s just been announced that S90/V90 models are to gain a T4 190hp turbo petrol engine and automatic transmission to accommodate any possible move by customers away from diesel power to petrol. For the 2018 model year the range is now complete and it also includes the addition of the sporty specification R-Design level for both body types.   The complete specification line up is Momentum, Momentum Pro, R-Design, R-Design Pro, Inscription and Inscription Pro.

Some prices have just been increased so for the S90 saloon they start at £34,465 and rise to £57,705 for the Hybrid model with the top level spec. The V90 estates cost £2,000 more than their equivalent saloon model. Of course there is a huge range of extra cost options and packs that will push the price up much further.

As an example I have just tried the S90 D5 PowerPulse AWD R-Design automatic priced at £43,165 on the road but fitted with an array of options this test version cost £54,335.   Some of the heavy cost options were the £1,800 Xenium Pack which includes a glass tilt and slide sunroof, automatic parking and a 360-degree parking camera. The Winter Pack with heated front windscreen, heated steering wheel, heated washer nozzles and headlight cleaning systems added another £525 to the price. The premium Bowers and Wilkins sound system costs £3,000 and the Active Four adaptive suspension system which includes rear electronic air suspension costs another £1,500 but is well worth it given the sporting ride nature of the R-Design specification.

The options list is extensive and complies with the personalisation requirements of the buyers who frequent the premium brand large saloon and estate market sector. The S90’s main competitors are the Audi A6, BMW 5 Series, Jaguar XF and Mercedes E-Class saloons and the V90 will compete against the estate versions of those models which now include the new Jaguar XF Sportbrake available with 2WD and 4WD variants.

The S90/V90 are the latest models after the new XC90 SUV to be built on Volvo’s scalable product architecture where the only fixed point is the distance from fascia to mid-point front axle and all other measurements are varied to suit the particular car. 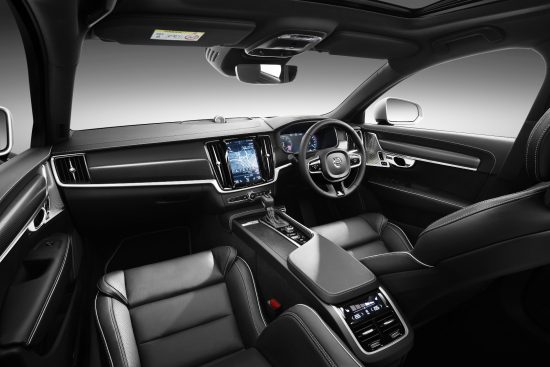 Whereas previous top of the range Volvo saloons and estates have adopted a boxy design for maximum interior practical passenger and load carrying abilities, the new S90/V90 models are far more elegant with sleek styling lines outside and a classy interior with clean premium Scandinavian design incorporating leather upholstery and a variety of light wood or aluminium trim inserts. All models have Volvo’s Sensus operating system of driving aids as well as the latest in connectivity functions.

Sensus includes semi-autonomous drive technology as standard to make operating easier and safer. This takes care of the steering, accelerator and automatic braking at up to 80mph to keep the car within the required lane and at a set speed and no longer requires a lead vehicle to follow. Sensus also includes large animal detection warning and run-off road mitigation. It is also the umbrella for intuitive infotainment including a nine-inch vertical touch screen, a voice control system and integration of Apple CarPlay which is an extra cost option. 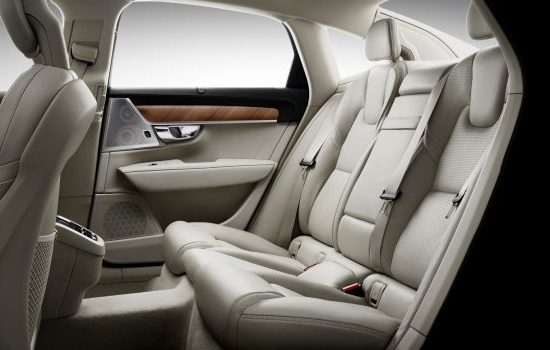 The important feature of a premium quality large executive saloon is interior space and comfort. The overall length is almost five-metres with a width of 1,895mm but it’s got a lower roofline than previous big Volvo saloons at 1,443mm so headroom for her tallest rear seat passengers is snug. Most importantly it has a long 2,941mm wheelbase to provide that extra rear seat legroom and there is a 500-litre boot to accommodate that expensive luggage. Potentially you could carry three adults in the rear but the R-Design contoured rear seats are more suitable for two adults.

Overall the interior is really classy and comfortable, you feel cosseted in a safe environment and even long journeys were not tiring. The ride was comfortable and the suspension compliant, certainly not as unforgiving as the Audi A6 or BMW 5 Series. And there is the choice of driving modes, Comfort, Dynamic and Eco. Comfort I used most of the time, Dynamic hardly at all – it’s not that sort of a saloon and Eco I selected for motorway cruising. As for the driving functions they were all laid out in a logical manner. I have complained before with other brands about too many controls for important functions being contained within a touchscreen system.

The tablet style portrait controls numerous functions as well as the sat-nav and sound system but there are short-cut buttons for such things as the temperature controls which made life easier and a little safer than scrolling through sub-menus to find the right operating mode. 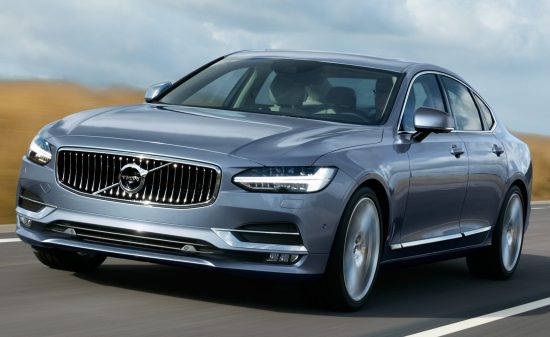 As for driving dynamics? The German competitors feel more tied-down when it comes to handling. The Volvo S90 wafts along which was not unpleasant and a darn-side more comfortable providing the right mode was selected and that is where the extra cost adjustable dampers and air-suspension option is worthwhile. Yes it does dull the sharpness of the handling but in real terms it’s a better option than a tiring rock-hard ride. Despite its size the S90 felt reasonably agile and the steering trustworthy.

I know Volvo place great importance on driving support and safety functions but I found the Pilot Assist semi autonomous steering intrusive at times, especially on motorways.   The steering sensors use the painted lines to keep you on the straight and narrow. I found the S90 reluctant to change lanes as the steering firms up too much for my liking to keep the car straight ahead and the warning vibration kicks in when you are leaving the motorway lane it thinks you need to be in.

On normal roads the steering had a heavy straight ahead tendency as well and its Dynamic setting made this heavier still without offering any more feedback to the driver. Autonomous driving is coming and Volvo says their cars will be fully autonomous by 2021 with trials starting in London next year as part of their Drive Me global preparation programme so best we get used to it.

The 2.0-litre D5 PowerPulse 235hp turbodiesel engine is one of Volvo’s own Drive-E units. Like the lower powered D4 unit it has two turbochargers that work sequentially to provide responsive power at low and high revs. But the D5 also uses Volvo’s PowerPulse system which injects compressed air from a self generating source stored in a tank in the engine bay. This injects air into the path of the first turbocharger, like a supercharger, to get it spinning when it would be idle, such as very low engine revs. This provides for immediate response as soon as you press the accelerator.   With 480Nm of torque from 1,750rpm the grunt is impressive and provides torque right through a very broad powerband.

The eight-speed auto gearbox gives seamless changes throughout the acceleration range with no ‘snatches’ between gears during hard acceleration but in ECO mode there is a ‘coasting’ function to save fuel but there was a noticeable ‘clunk’ when it deactivated as the power was applied again. The AWD traction is of real-life benefit during the winter months in mud, ice or snow conditions. The AWD facility is also beneficial for towing duties and this D5 saloon can tow a trailer, caravan or boat of up to 2,200kg. 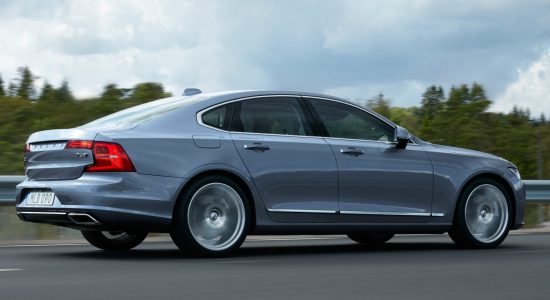 As for running costs the official figure is 58.9mpg on combined cycle but even with some longer motorway journeys at 70mph mixed with my usual country road driving and some limited amount of in-town travel, the real-life figure was a disappointing 38.8mpg.

I say disappointing because the official figure is much higher but in reality the figure my test drive returned for a saloon of this size and performance was realistically quite good.

The Volvo S90 is a commendable alternative to the premium German brands in the executive saloon car market and certainly a more niche option than its now common-place competitors.

Against: Real-life test drive fuel economy didn’t get close to the official combined cycle figure, semi autonomous steering can be intrusive on motorways and ‘ heavily weighted’ for the straight-ahead at other times, not a very generous mileage limit for the warranty, expensive array of extra cost options.