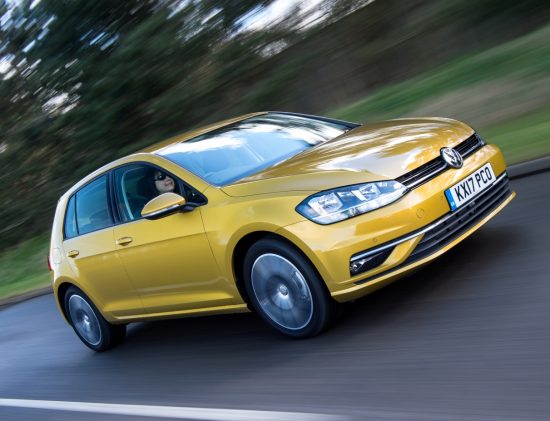 Despite Volkswagen Group’s tarnished reputation due to the emissions scandal it appears there has been limited damage to their sales – especially the refreshed 7.5 generation Golf range of three and five door Hatchbacks and Estates, says David Miles.

The face-lifted Golfs arrived in UK showrooms in April and have been selling like hot cakes in a cooling market. Currently the Golf is the UK’s second best selling new car overall with 68,396 registrations and only beaten by the smaller Ford Fiesta but now ahead of the Golf’s main competitor – the Ford Focus. In Europe the updated Golf range is the number one seller with close to 500,000 registrations so far this year, that’s almost one third of all VW new car sales in Europe and the brand remains the market leading manufacturer despite its ‘dieselgate’ issues.

To keep up the Golf’s sales momentum in the UK, VW has just confirmed they will extend their Scrappage scheme for the Golf and their other new cars which started in September and it will now run until 2 April 2018. It applies to new VW cars, petrol/diesel/electric/plug-in hybrid models to be delivered by 30 June 2018. This offer is for £4,000 off the price of a new Golf against any pre-Euro 5 diesel vehicle registered before 2010.

The Golf since its launch in 1974 has achieved in excess over 33 million global sales, more than two million of which have been to UK buyers. A new Golf is produced every 40 seconds from their factories around the world. The VW brand sells in 150 markets and produces vehicles in 14 countries. The Golf is VW’s best selling model range worldwide.

When the revised Golf Hatchbacks and Estates were introduced earlier this year the headlines were all about a mild styling refresh, more equipment, updated engines and lower prices, around £650 on average less than the derivatives they replaced. The latest Hatchback prices range from £17,765 for the 1.0-litre TSI 85hp 3-Door up to £34,650 for the Golf R 5-Door 2.0-litre TSI 310hp 4×4.   Estates range from £20,530 to £35,700 for the same engine models and this line-up includes Alltrack 4×4 versions. The core spec levels depending on body style are S, SE, SE Nav, GT, R-Line, GTD, GTD Blueline, GTI, GTI Performance and the high performance R.

In addition to a wide range of petrol and diesel engines the Golf 5-Door Hatchback is also available in GTE specification which is a 1.4 petrol/electric PHEV plug in hybrid with 204hp and CO2 emissions from 38g/km priced from £23,135. There is also the new e-Golf 5-Door Hatchback, all electric with 136hp and 0g/km priced at £27,690. 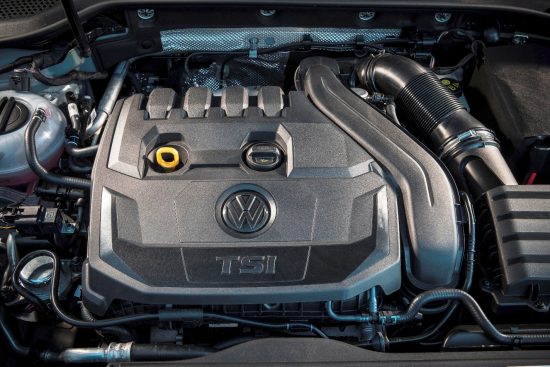 Since then the launch the range of engine options has been increased with the arrival of the new 1.5-litre TSI EVO petrol unit using Active Cylinder Management or cylinder-on-demand technology first seen with their 1.4-litre engine. The 1.4 unit continues to be available for lower specification models and the petrol/electric hybrid variants and is still widely available in other Volkswagen Group brands. Other brands within the Volkswagen Group, Audi, Skoda and SEAT will also use this new EVO engine.

For the VW Golf range the new 1.5 EVO engine is available in two states of tune, 130 and 150hp. Both are turbocharged four cylinder petrol engines and are available with six-speed manual or seven-speed DSG automatic transmissions. The 130hp unit is available in SE and the best selling SE Nav specification for Hatchbacks and Estates and the 150hp unit in GT and R-Line for the Hatchback and GT for the Estate.

The new 1.5-litre EVO engines offer more power, improved fuel economy and are cleaner for CO2 emissions than the highly rated 1.4-litre unit.   As an example the 1.5 EVO 130hp unit with six-speed manual gearbox in the best selling SE Nav 5-Door Hatchback returns an official 58.9mpg in the Combined Cycle with CO2 emissions of 113g/km so VED is £160 First Year rate and then £140 Standard rate. The 1.4-litre, 125hp unit has the same six-speed manual gearbox and returns 54.3mpg but even with the higher 120g/km of CO2 it still costs the same for VED charges. Top speed is 130mph for the 1.5-litre unit and 127mph for the 1.4, both cover zero to 62mph in 9.1-seconds, insurance for both is Group 15E and the torque is also the same for both at 200Nm from 1,400rpm. Perhaps the most important point is, other than its better fuel economy, the fact that the 1.5-litre 130hp unit costs £810 more than the 1.4-litre 125hp engine. 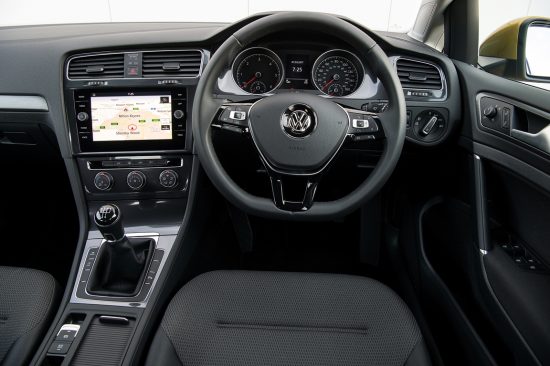 That seems an unwarranted extra cost for not a lot more in real terms and during driving there didn’t seem to be that great deal of difference either. Both are very responsive because of the 200Nm of torque available from a very low, for a petrol engine, 1,400rpm. On paper the 1.5-litre Evo 150hp unit offers a bigger advantage but it is only available with a higher specification model with no choice of the 1.4-litre unit, so a step up to a 5-Door GT Hatchback will cost £24,100, that’s £2,310 more than my test drive 1.5-litre, 130hp, SE Nav 5-Door Hatchback.

Probably the deciding factor will be the specification and the SE Nav is the best selling level for the Golf range. Some of the reasons to select this level are of course the Discover Navigation infotainment system with its 8.0-inch touchscreen that includes Car-Net in-line driving information about traffic, weather and fuel prices. 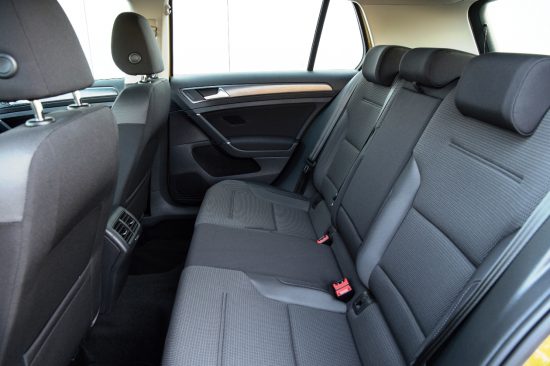 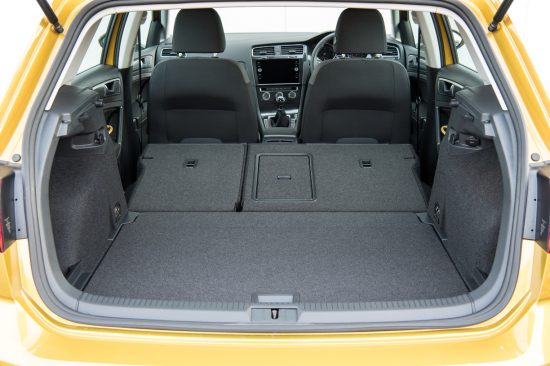 Core technology in the new 1.5 EVO engine is Active Cylinder Management. This shuts down two of the four cylinders when the driver lifts their foot of the throttle for the 150hp unit and for the 130hp engine, badged BlueMotion, all four cylinders shut down when the car is on the overrun (coasting). The switch from all four cylinders to none is seamless and acceleration is instantaneous but that was the case with the 1.4-litre unit as well. The new EVO unit is remarkably compliant with linear power delivery, its smooth, quiet under load and flexible to run in high gears at low engine speeds when conditions dictate yet it picks-up rapidly as the turbocharger spins into life.   Overall my week of test driving returned an overall average of 49.6mpg and that covered long and short journeys and winding country lanes. Two motorway journeys saw the figure reach 55.9mpg even at 70mph cruising speeds.

As for the latest Golf itself, its sales success speaks volumes for its on-going popularity. It is no longer the roomiest car in its C-segment sector especially for rear seat passengers, that honour goes to its Skoda branded Octavia sibling which is also cheaper. And the huge sales success of SUVs/Crossover styled vehicles also gives strong competition for the Golf and they will shortly include the new Volkswagen T-Roc, a Golf sized 2WD and 4WD SUV priced from £20,425. The T-Roc line-up will also include the new 1.5-litre EVO engine options as well. Also waiting in the wings as a competitor is the new VW Polo which is much larger than the current models. 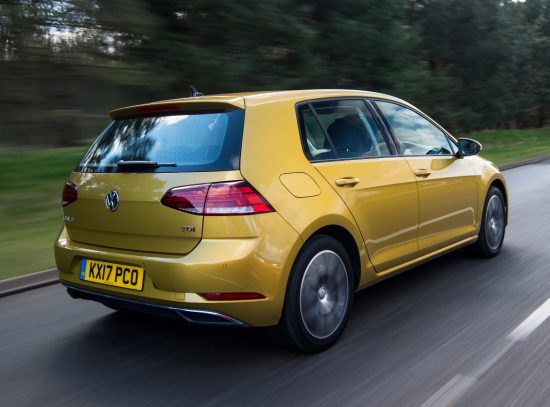 Still for now the latest Golfs keep motoring on and the new 1.5-litre EVO engine is a good example of new technologies meeting the challenging requirements to produce better fuel economy and lower emissions from internal combustion engines but incurs added purchase cost but there is now the latest £4,000 Scrappage offer to sweeten the deal.