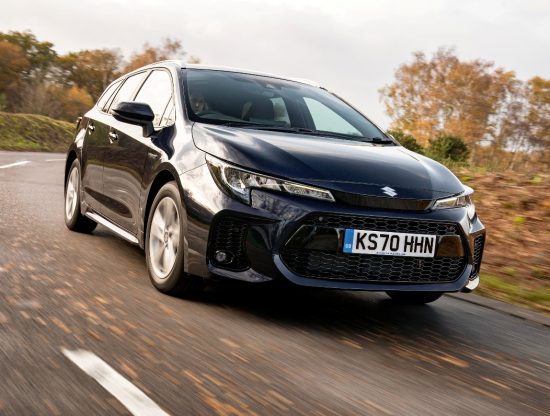 The Suzuki Swace hybrid 5-door mid-sized estate is the second recent model to join the Suzuki range from their partnership with Toyota formed in 2019, writes David Miles.

Toyota also manufacture the Across large-ish Plug-in-Hybrid SUV which is based on the new RAV4 PHEV.

The addition of Swace and Across models to the Suzuki range means all Suzuki models throughout their line-up are hybrids and that helps manufacturers to meet ever more stringent overall exhaust emission targets and rising development costs which reduce profit margins.

The Swace estate is based on the estate version of the latest Toyota Corolla range of 5-door Hatchback, Touring Sports estate and 4-door Saloon.  The Swace like the Corolla Hatchback and Touring Sport models are built by Toyota in the UK so that’s good for Britain and hopefully patriotic customers. Suzuki GB will also be responsible for exporting between 11,000 to 12,000-UK built Swace vehicles annually to Suzuki distributers in the EU.

Unlike the comprehensive Corolla family line-up of models and the choice for most of them of 1.8 and 2.0-litre petrol-electric self-charging powertrains with standard fit CVT auto transmissions, the Swace estate has a simple line-up, just the 120hp 1.8-litre hybrid powertrain with CVT auto gearbox and SZ-T and SZ5 specification levels.

It’s worth noting that just like the Suzuki Across SUV the Swace estate is only covered by a 3-year/60,000-miles warranty whilst the Toyota RAV4 PHEV and Corolla estate are covered by Toyota’s 5-year/100,000-mile warranty although both brands offer a 5-year warranty for the components of the hybrid system.

Another annoying gripe I’ll mention now, no sat-nav systems for Across or Swace despite their high spec level rating whilst the Toyota models have them either as standard in most cases or as an option. It’s even more annoying because the Across/Swace touchscreen display has a ‘map’ display button.  Users of Suzuki versions have to use the sat-nav function via the data allowance of their mobile phones. 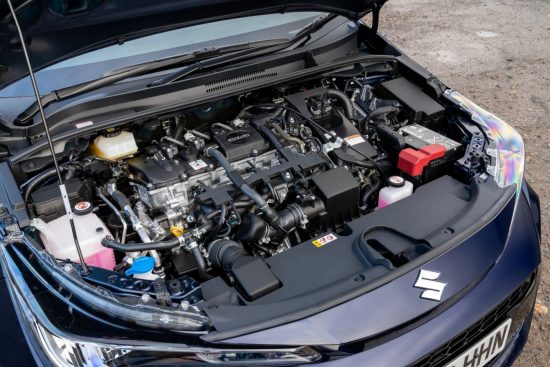 It has the well known Toyota 1.8-litre, 4-cylinder normally aspirated direct injection petrol engine developing 102hp boosted by an electric motor of 53kW giving a  total self-charging hybrid system output of 122hp  and torque of 163Nm from the electric motor overlapping with the  142Nm of torque from 3,600rpm from the petrol engine.

Drive to the front wheels is through a CVT auto transmission and there are the usual Normal, Eco and Sport selectable driving modes plus EV Drive Mode which the driver selects for solely driving via the electric motor for short distances. This is especially suitable for use in residential areas early in the morning or late at night, or in garages and indoor cat parks.

The Swace with its petrol-electric self-charging powertrain can be driven either by the electric motor, the engine and electric motor combined or the engine can charge the battery via the on-board generator while driving.

During deceleration and braking the electric motor also uses the wheel rotation to generate electricity to charge the lithium-ion battery positioned under the boot floor. There is no plug-in PHEV mains charging facility with this system and of course there is no driving range anxiety as with some pure electric powered cars. 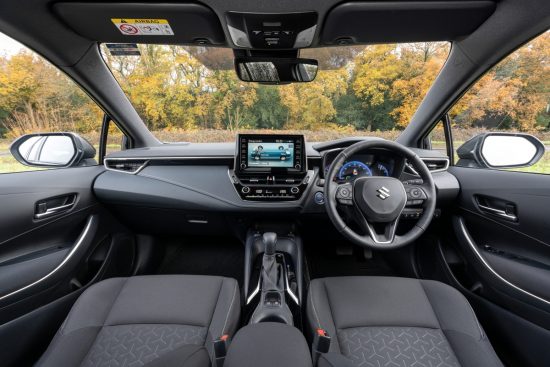 This was with lots of short runs and the rest of the driving was mainly winding country roads to our main shopping centre.  The CO2 emissions initially when launched were published at 99g/km but just recently these have been confirmed as UK spec level adjusted at 103g/km.

This change has pushed the VED First Year Alternative Class road tax up from £125 to £145 but the Standard rate for year two onwards remains at £140. The BiK company car tax was 22% but this has increased to 23% following the CO2 emissions revision.  Insurance remains in Group 20E. Warranty we have already discussed.

As for size well the Swace is 4,655mm in length, 1,790mm wide, 1,460mm high with a relatively long wheelbase of 2,700mm which allows for good rear passenger legroom.  The boot area is very practical with 596-litre with the split rear seats in use and 1,606-litre with the rear seat backs folded down fully flat and for ease of use there is a remote lever to fold down the seats in the luggage area.

The rear sill is low and the floor is level with it so it’s easy to slide heavier items into the boot.  For those that tow the braked towing weight is only 750kg due to the weight of the hybrid components.

As for the Swace’s exterior appearance, it looks from its side profile with the longer wheelbase and low height, to be aerodynamic and at the front is a Suzuki interpretation of the Toyota Corolla grille.

At the rear is rather a dull treatment of the bumper which makes the rear quarter of the body look bloated rather than athletic.

The smaller 16-inch wheels don’t give the car a visual lift and normally I advocate staying with smaller alloy wheels with deeper walled tyres for better ride comfort but I think 17-inch wheels might just give the Swace’s subdued styling a sportier looking lift.

Inside the design is carried over from the Toyota Corolla, clean and uncluttered styling lines, well positioned controls and a centrally positioned ‘floating’ 8-inch touchscreen for using the radio and other functions.

Thankfully the heating and ventilation controls are not via the touchscreen, they have their own logical place and are simple and easy to use.  There are the usual steering wheel mounted buttons and Bluetooth is included and is compatible with Apple CarPlay, Android Auto and MirrorLink.   Annoyingly there is no sat-nav fitted or available as an option. 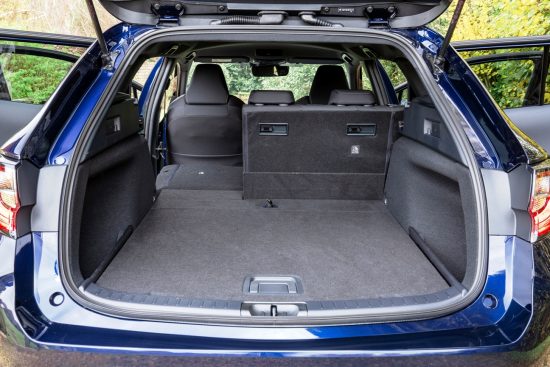 There is just a pointless button on the touchscreen which says ‘Map’ which is useless.  The centre console between the seats houses the cupholders and storage and the doors have adequate holders as well as storage for the usual ‘stuff’ we gather over a period of time. 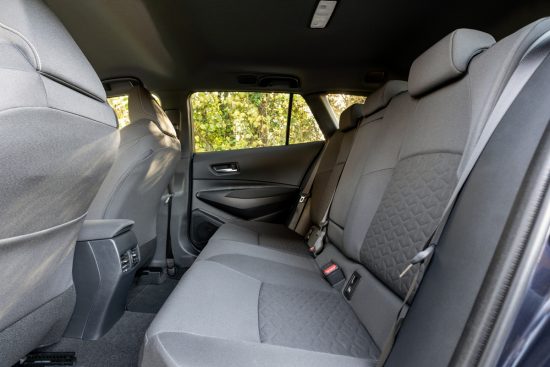 Either spec level is a good package but the SZ-T looks the best value with its £1,800 lower price and that leaves more than enough to buy an after-market sat-nav system.

As for driveability, the 1.8-litre petrol-electric self charging hybrid system we know well enough from Toyota Corolla and Prius models and its very fuel efficient if driven with consideration as my restricted long journey driving proved. In other words it’s better for shorter commutes with plenty of stop-start conditions and winding country roads rather than high mileage high speed driving trashing it along motorways where there is little opportunity for the hybrid and recharge system to work at its best. 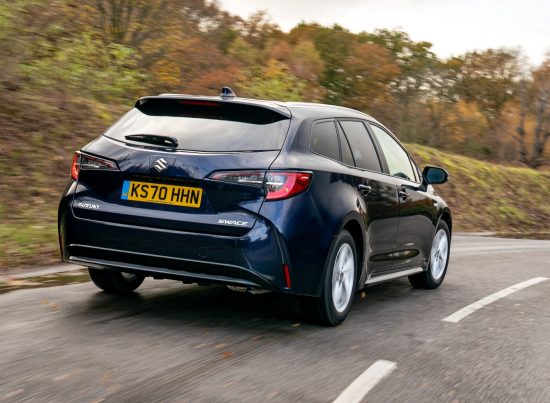 The handling is well balanced, steering sharp, the ride comfort was good to soft due in part to the deep-walled tyres. I think 17-inch alloy wheels with marginally lower profile tyres would give it a sharper cornering performance and reduce the body-roll through the sidewalls of the deeper standard 16-inch tyres. But it’s an easy car to drive and live with.

The Swace family estate courtesy of the deal with Toyota gives the Suzuki yet another string to their bow for increasing sales whilst lowering the overall CO2 emissions of their entire range.  It also means Suzuki dealers have a UK produced model to sell to patriotic customers and now we are out of the EU what’s wrong with supporting British jobs.