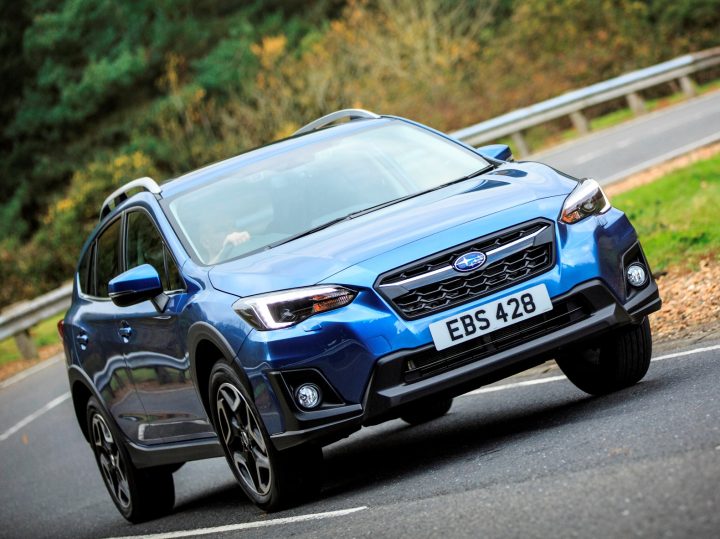 Although Subaru is a brand with increasing sales in the North America and Australasia, but in the UK the brand has always been and still is a niche choice appealing to older customers with an individual desire to own something different.

It is failing to attract a new generation of younger buyers although it still has strong customer retention. Gone are their glory days where sales of conventional Subaru models were boosted by the success of their awesome Impreza rally derived road cars although the range still includes the WRX STI Saloon and Impreza Hatchback.

To raise their profile Subaru UK have become the official automotive sponsor for the 2018 Ideal Home Show at Olympia, London being held at the end of March until 2 April. Chris Graham, Managing Director of Subaru UK said, “The Ideal Home Show is a great opportunity for us to interact with like minded people who love being active and creating new experiences for themselves and others to enjoy”. Certainly it puts their products in front of a larger audience of potential customers so far unaware of what the niche brand offers.

Subaru UK needs to raise the profile of their models, especially to younger family customers as last year their UK sales fell almost 26% to just 2,679 units and this year they are down by 4% despite the recent arrival of the new XV compact 4WD SUV/Crossover. They can only offer limited coverage of the UK market with around 70 dealerships which doesn’t help their sales potential so being seen in front of a large crowd of prospective new customers at the Ideal Home Show can only help awareness of the brand. 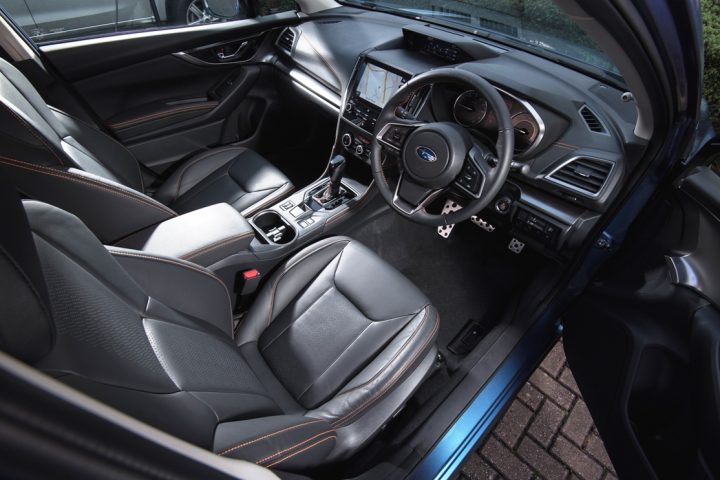 The new Subaru XV range of just four variants is priced from £24,995 to £28,495. On the face of it, it doesn’t look from the outside as particularly different from the previous generation model.

There is the familiar face, clamshell bonnet, coupe style side profile, sculptured side panels and doors, steeply raked rear tailgate and roof spoiler with large wheelarches, high ground clearance and protection mouldings running around the lower parts of the body. Using a new platform the boot space has been marginally increased to 385-litres and with the 60-40 split rear seat backs folded this goes up to 1,290-litres, not the largest in its competitive sector but ample enough.

But under the skin is an all-new platform and the body is claimed to be 70% torsionally stiffer so improving the handling through better rigidity and the body strength has been increased by 40%. Those structural changes appear to have reduced insurance group costs because the new models have group ratings from 10E to 16E whereas before they were 21E to 27E. The use of Subaru’s new EyeSight driver assist two camera system also helps with lowering insurance costs and helped in obtaining its EU NCAP five star safety rating.

For the new model range the 2.0-litre 147hp diesel engine quite understandably, due to the fall in oil-burner sales, has been dropped from the range to be replaced by a new 1.6-litre 114hp normally aspirated port injection four cylinder ‘Boxer’ unit. By far the best selling engine will be Subaru’s 2.0-litre, 150hp flat-four ‘Boxer’ horizontally opposed direct injection non-turbo petrol unit. 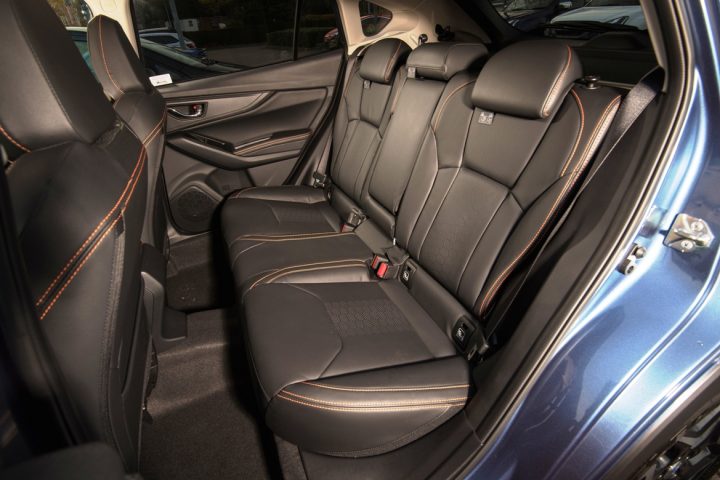 All versions in true Subaru tradition have permanent Symmetrical All-Wheel Drive called X-Mode and Hill Descent control and all models have their Lineartronic automatic transmission. This system is a CVT continuously variable unit but uniquely it also includes a torque converter to smooth out gearchanges.

With the 2.0-litre engine this system can be operated in fully automatic or manual modes operated by the steering wheel paddles. For optimum traction, setting off in snow, ice or mud, the driver can choose second gear by putting the selector into manual and flicking the upshift paddle, a useful function once you learn how to use it.

Both engines are available with SE and SE Premium specification levels.   All versions have an eight-inch touchscreen and its functions include sat-nav for the SE Premium version. All versions have Apple CarPlay and Android Auto connectivity plus DAB radio. Fortunately the commonly used heating, ventilation and air-con controls are not within the touchscreen system but logically located beneath it as are the radio, media and phone controls plus there are switches in the steering wheel spokes and lights and wipers use conventional steering column mounted stalks. The start push button is unfortunately hidden behind the steering wheel.

There has been a significant improvement in the quality and design of the interior. The surfaces are soft-touch and look of a higher quality with a better fit and finish. The new design centre console stack houses logical easy to use heating and ventilation controls, the heated front seat buttons, the X-Mode 4WD control with Descent Control and auto gear selector. Above that is a smarter and more modern eight-inch colour infotainment touchscreen which is standard on all models with Apple CarPlay and Android Auto connectivity. 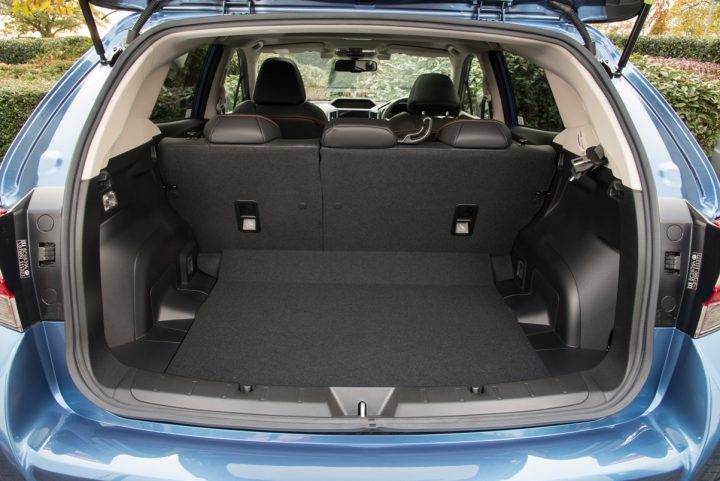 Although the Subaru XV is similar in its styling to others in this very competitive sector already dominated by such models as the Nissan Qashqai, Ford Kuga, VW Tiguan, SEAT Ateca, Skoda Karoq, Mitsubishi Outlander, Honda HR-V, Mazda CX-3, Toyota CH-R and potentially the premium brand Audi Q3 and BMW X3, but it is a different ‘beast’ in terms of driveability. It is unique in having its ‘Boxer’ flat-four normally aspirated petrol engines which means the vehicle has a low centre of gravity so the car always feels planted on the road. The ride quality was very good, generally compliant with only impacts from the worst of the potholes being felt inside the car.

The four wheel drive system dispenses traction symmetrically to each individual wheel so there is always maximum traction whether it’s on or off-road driving and the X-Mode selector enhances its off-road performance above most of the competition in its sector. Potentially its only drawback is the CVT transmission. Yes it is about as refined as these systems get with the additional torque converter ironing out the gearchanges. The downside is that it’s slow to change gear, it will hold onto gears too long and if the throttle is pressed hard the engine tone rises sharply to make it sound under strain even with the 2.0-litre version I tested.

This 2.0-litre turbocharged petrol unit produces 156hp but only a modest 196Nm of torque at 4,000rpm so it needs to be kept in its most responsive area of the powerband to get the best acceleration pickup and that’s not always easy with the CVT auto gearbox. Top speed is still 120mph and zero to 62mph takes 10.4-seconds, reasonable enough for most traditional Subaru owners but probably not inspiring enough for potential converts to the brand. Officially the Combined Cycle fuel economy figure is 40.9mpg and my test drive figure actually was better than that, something that cannot usually be written with a figure of 41.5mpg for a week of motoring covering all types of driving, except off-road work. The CO2 figure of 155g/km means the new VED road tax cost First Year rate applicable from 1 April this year is now a high cost £515 before the Standard £140 cost is applied for Year Two onwards. Company car drivers will now pay 32% Benefit-in-Kind tax. Insurance is at the new lower level of Group 16E. 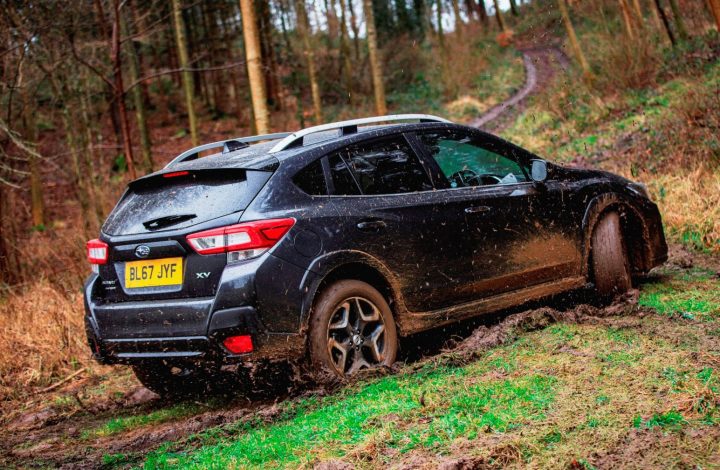 Overall, the new Subaru XV is much improved in its second generation. In a crowded market sector its main appeal is its uniqueness in terms of its powertrain, 4WD traction and potentially for some customers it’s a niche vehicle, you don’t see that many on our roads.

Add in the high spec with a nice interior and sometimes it pays not to go with the flow but to choose something just that bit different – you know it makes sense – probably!