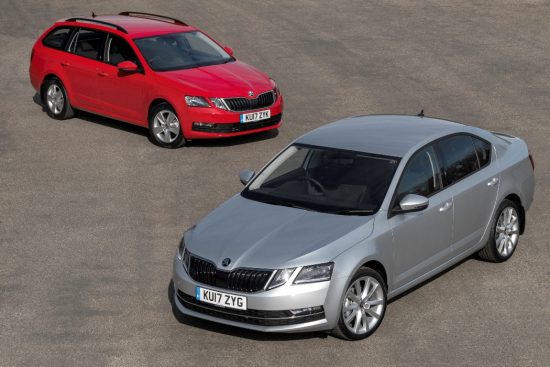 Combining a roomy mid-sized family hatchback with a small 1.0-litre three cylinder petrol engine could be a step too far in terms of dull performance and disappointing fuel economy.

But it’s not so with the latest Skoda Octavia five door Hatchback.

That is powered by the Volkswagen Group’s 1.0-litre, three cylinder TSI 115hp turbo petrol engine.   Whilst diesel engines and the Octavia in either its Hatchback or Estate forms has been the mainstay of sales for the Skoda’s best selling range, with a move away by customers from diesel power to petrol the smallest petrol engine on offer has the largest appeal in terms of purchase price, performance and low running costs.

The 1.0-litre TSI petrol engine with the base S level specification is the Hatchback range starter price model costing £17,195 on-the-road. The 1.6 TDI engine with the same 115hp output and with the same S spec costs £2,090 more at £19,285 and it’s a similar difference for the SE grade I tried.

It’s just a pity that this 1.0-litre petrol engine is only available with these two grades for the Hatchback and Estate ranges.   Higher spec levels see the smallest petrol engine being a 1.4-litre TSI 150hp unit and a new 1.5 TSI cylinder-on-demand 150hp turbo petrol engine has also been added to the range costing from £19,389.

In terms of performance both engines have a top speed of 126mph but the petrol engine is marginally faster for acceleration at 9.9 seconds for the zero to 62mph acceleration time. The only time the diesel engine outscores the petrol unit is for the Combined Cycle fuel economy where the diesel unit’s figure is 68.9mpg and the petrol unit is 58.9mpg but that is easily offset with the 1.0 TSI Hatchback being over £2,000 cheaper to buy than its diesel counterpart.

For the record more than five million Octavias have been built in the last 20 years with 436,000 delivered to customers last year. In the UK the Octavia range accounted for 28.7% of Skoda’s 2016 record new car sales of 80,372 units and 54% of buyers chose the Hatchback models over the Estates.

The latest 2017 Octavia Hatchback range has prices starting from £17,195 for the 1.0 TSI S spec manual running up to £28,985 for the new vRS 2.0 TSI 245hp DSG auto variant. Octavia Estates prices are £1,200 more than equivalent Hatchback models. These prices do not include the current Skoda Scrappage Incentive offer.

My latest Octavia experience was with the cost effective SE spec Hatchback powered by the impressive 1.0-litre TSI three-cylinder turbo petrol engine with a six-speed manual gearbox. The price is an appealing £18,500 on-the-road not including the current Scrappage trade-in allowance which is well below the comparable sized five door Hatchback models from Volkswagen Group’s other brands in this sector, the Audi A3 Sportback, Seat Leon and VW Golf as well as comparable models with similar engine sizes from Ford, Vauxhall, Kia and Hyundai to name just a few. In fact the appeal of the Octavia models is there longer size than the competition which almost puts them in a size class above so competing with the Audi A4 and BMW 3 Series and so the Octavia’s price is even more competitive. 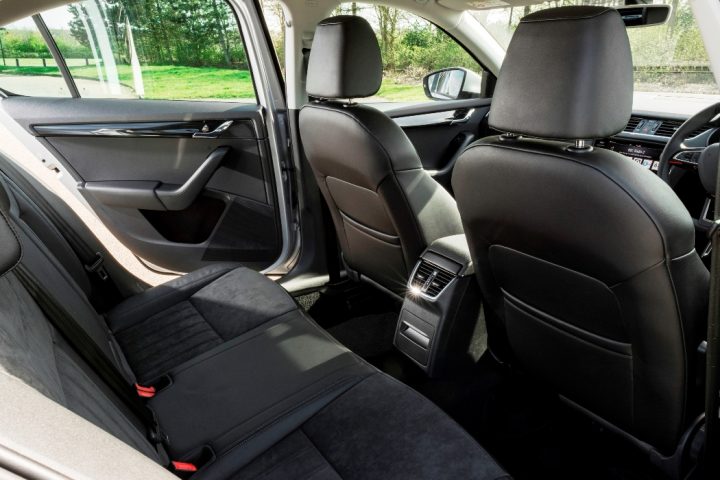 Whist value for money and low running costs are commendable reasons to buy the Octavia Hatchback it’s the size that really counts. It has an overall length of 4,670mm, and the wheelbase is the longest in its sector at 2,686mm meaning there is loads of legroom for three rear seat passenger. 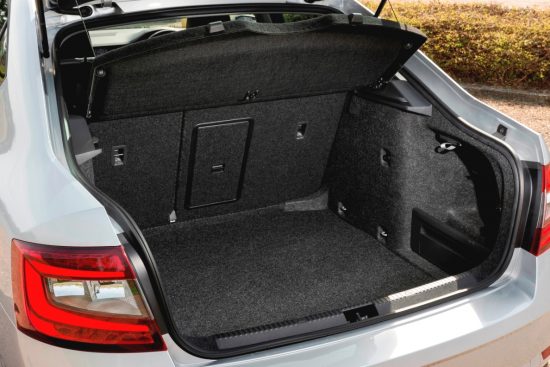 The rear legroom doesn’t detract from the boot space with 590-litres rising to 1,580-litres and the Estate offers 610 to 1,740-litres. My only gripe is the boot floor is much lower than the high rear sill, so affecting loading comfort.

The tailgate is steeply raked forwards so the headroom for an average sized Fido in the rear is limited. 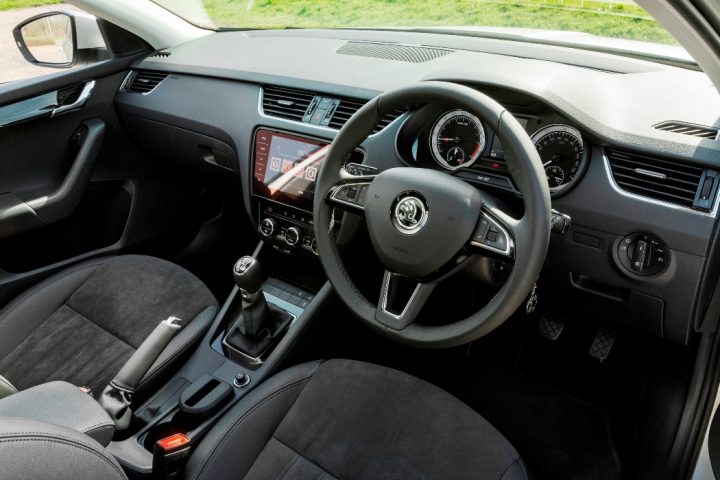 Inside the front of the latest Octavia it’s all very VW Group familiarity. You will recognise the layout, controls, instruments and overall design from Golfs, Leons and A3s and the quality of the upholstery, vinyl and plastic fascia and door coverings doesn’t seem any different.

The high spec is a bargain as well with the SE level ideally suited for most customers. The items include comfortable riding 16-inch alloy wheels, acoustic rear parking sensors, automatic post collision braking, Bluetooth, DAB radio, driving mode selection of eco/comfort/sport/custom, dual zone air-con, electric windows front and rear, electrically adjustable and heated door mirrors, front fog lights, LED daytime running lights, lots of storage space, hill hold, trip computer, remote central locking, SmartLink+ with Apple CarPlay, Android Auto and MirrorLink, start/stop and voice control. The only two options probably worth adding are the £800 touchscreen sat-nav system with Wifi and the £100 temporary spare wheel. All the controls are positioned for easy touch and thankfully the heating and ventilation controls can be operated outside the touchscreen system and that also has shortcut buttons positioned either side of the 8.0-inch screen for rapid use.

Another of this Octavia SE’s appealing reasons to own is the compliant ride comfort. The handling is on the lazy side, it’s not as sharp or as agile has the hard-riding VW Golf or SEAT Leon and that’s good for most people. There is some body-roll during cornering but the steering is precise and overall the handling remains predictable. 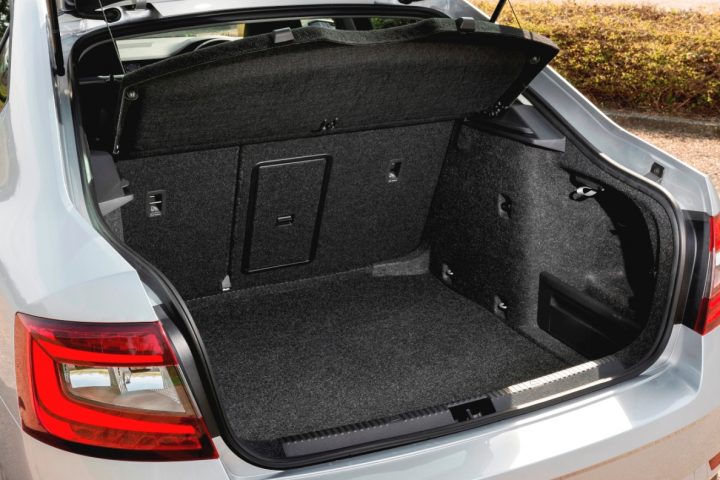 Apart from price, size and high spec, the star turn of this particular Octavia Hatchback is the 1.0-litre, three-cylinder turbocharged petrol engine. We know it well from other VW Group models and although my test car had the standard six-speed manual gearbox it is also available with a £1,250 DSG auto transmission which will appeal to many owners.

With 115hp and 200Nm of torque from 2,000rpm, on paper it’s not going to set the World alight but in the real World it’s a little gem. It’s quiet, reasonably fast, and certainly fast enough for most users with a top speed of 126mph and a zero to 62mph acceleration time of 9.9-seconds.

It will cruise very easily without stress fully loaded at 70mph. Around town it’s responsive and for country road driving you need to use the gearbox to keep the little engine in its most responsive rev-range. This is hardly a hardship because the payoff is excellent fuel economy.

Officially the Combined Cycle figure is 58.9mpg and I must remind you we are talking about a petrol engine NOT diesel. In real-life my week long test drive figure was 56.2mpg for long and short runs, town and country driving.

During one long run with 80 miles of dual carriageway and motorway driving the computer actually showed 61mpg. With CO2 emissions of a low 110g/km VED road tax is £140 every year and company car drivers will pay 21% Benefit-in-Kind tax. Insurance is a low Group 14E. 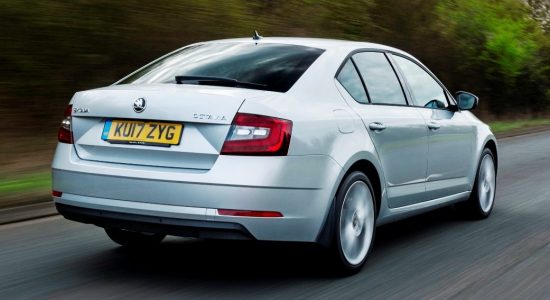 For me it’s a done deal, buy this 1.0 turbo-petrol engine over the 1.6 TDI turbodiesel and save £2,090 on the purchase price and have the same performance and only marginally less fuel economy. The saving in the purchase price will pay for a lot of fuel.

It’s just a shame this engine is only offered for the Octavia on the lower S and SE spec grades but I’d recommend the SE grade anyway for most customers to consider buying.

Against: This engine is only offered on the lower S and SE spec levels, high boot sill to lift over heavy items