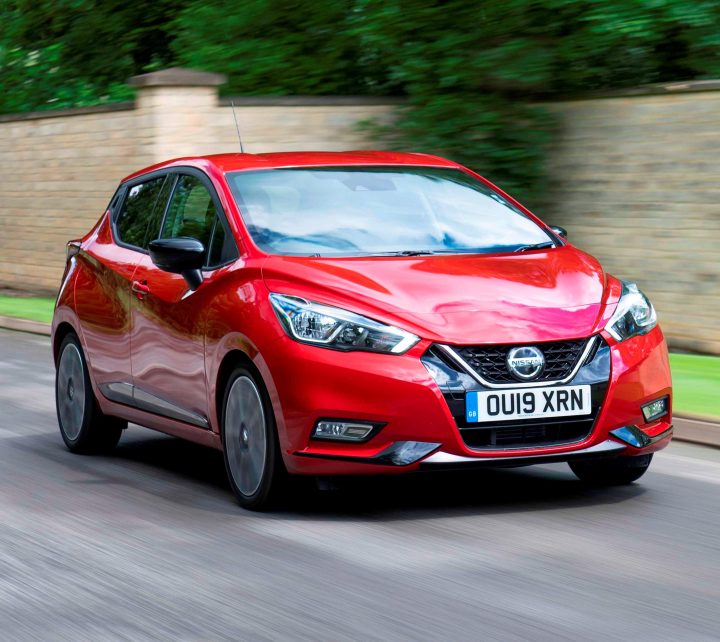 The 100hp turbo petrol engine is perky in performance and the design of the five-door supermini sized hatchback body is blindingly more eye-catching than the previous four generations of Micra which have been served up since 1983, writes David Miles.

Most recently Nissan further revised some of the power units available in the updated range and these EU6 compliant units include a new turbocharged 1.0-litre IG-T100 petrol unit available either with a five-speed manual gearbox and an Xtronic CVT automatic transmission, the only engine in the range to offer two-pedal driving. Nissan sees a significant demand for auto gearbox model sales going up from 12% in 2017 to over 30% predicted by 2020.

The latest engine additions also include an 117hp version of the same 1.0-litre petrol engine with a six-speed manual gearbox.

Also included in the latest changes is the addition of an N-Sport specification level with racier styling cues, lowered suspension and it is available with the 100/117hp turbo petrol engines as well as the existing 1.5-litre dCi 90 turbodiesel unit.  There is also the choice of carry-over IG-T90hp turbo petrol and a non-turbo IG 71hp petrol engine, both with 5-speed manual gearboxes.

Spec levels for this revised line-up are Visia, Visia +, Acenta, N-Sport, N-Connecta and Tekna but their availability depends on the engine chosen. On-the-road prices range from £12,875 to £20,010. 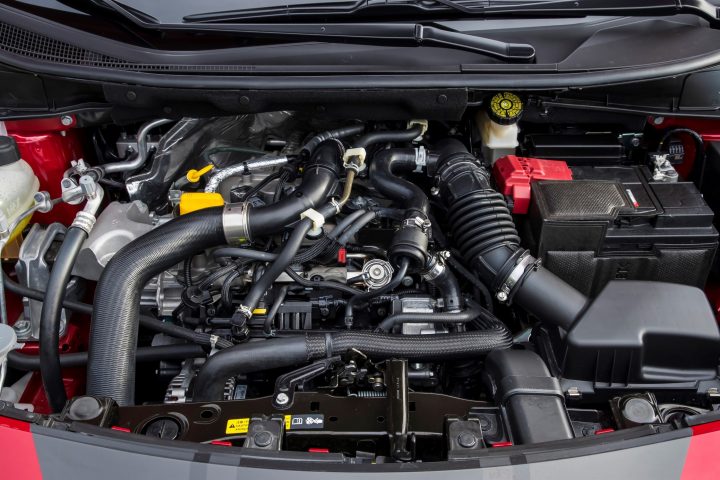 Its competitors are numerous headed in the UK sales chart by the Ford Fiesta, VW Polo, MINI and Toyota Yaris but also includes the SEAT Ibiza, Skoda Fabia, Citroen C3, Hyundai i20, Kia Rio, Suzuki Swift, Honda Jazz  and the new generation Peugeot 208, Vauxhall Corsa and Renault Clio ranges are due out soon.

Compared to the first four generation of Nissan Micras, described to have a dowdy conservative styling image, the latest Micra is hugely different with sharp sports styling, its larger, roomier and with a wide range of safety, chassis control and driving support systems as standard, plus the usual connectivity functions, sat-nav and so forth. In keeping with its competitors there is also a wide range of extra cost options and personalisation choices.

Whilst previous generation models were at best considered to be a safe and secure buy, much loved by driving schools, they could not be described as fun to drive or with much kerb appeal. 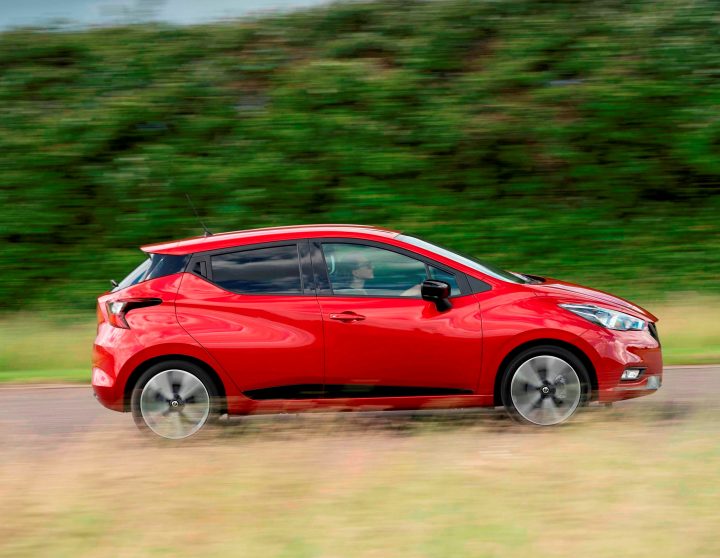 Now it’s all different with really sharp styling lines, sculptured body panels, a rising waistline giving it a wedge shaped side profile with concealed rear door handles in the window frames and a rear spoiler over the tailgate of the five-door body.

It is similar in style to the current Renault Clio which is understandable due to the Nissan-Renault-Mitsubishi Alliance where platforms and components are being shared. Regarding the new Micra you can also see the new generation family design evident with the latest Qashqai SUV and the soon to arrive new Juke SUV looks like a scaled up version of the Micra, at least in the pre-launch photographs I’ve seen of the new compact SUV.

With an overall length of 3,999mm, a width of 1,743mm, height of 1,455mm and a wheelbase of 2,525mm, it’s compact, easy to park and the room inside at the front for a supermini is good, it’s not so roomy in the rear for legroom though making it less suitable for growing family use.

However the 300-litre boot is a reasonable size and if you fold down the rear seats this expands to 1,004-litres. The interior styling is very modern with grained synthetic soft touch leather coverings for most of the main trim areas. 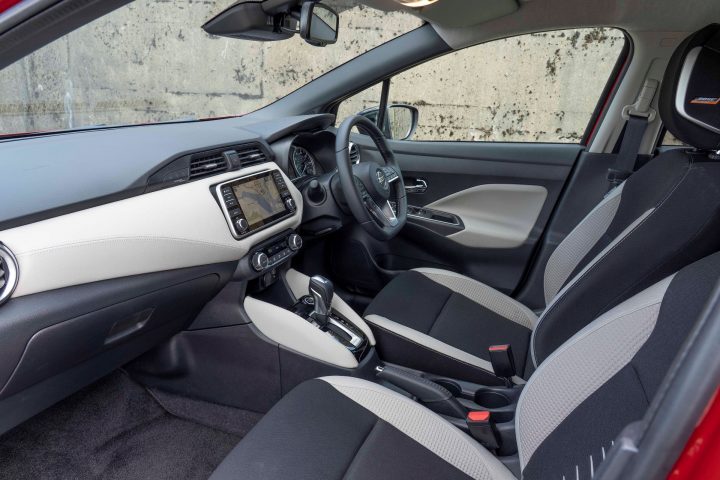 There is a nice clean-line fascia panel with its easy to use centrally positioned touchscreen with separate heating and ventilation controls.  Overall the interior matches the new exterior looks, much sharper, much more modern and blindingly much better than previous dowdy models.

But the Micra’s improvements and refinement are more than skin-deep. These features include Intelligent Emergency Braking with Pedestrian Recognition, Intelligent Ride Control, Intelligent Trace Control and Lane Departure Warning.   Air-con and stop-start are standard on all but the base spec model with mid range spec models and above having alloy wheels, smartphone connectivity, seven-inch touchscreen and much more.

My  overdue test drive in the latest incarnation of the Nissan Micra was with the new IG-T100 turbo petrol three-cylinder engine mated with the new CVT auto transmission and with the Tekna spec level which weighed in at a hefty £20,585 including the £575 Passion Red ‘character metallic paint’ finish as Nissan calls it.

The Tekna spec level, being the range-topping’ version, is comprehensive adding such items as 17-inch alloy wheels, Keyless Go, a rear view camera and a superb BOSE audio system designed specifically for the Micra.

The new IG-T100 turbo petrol, three-cylinder engine with 100hp has 144Nm of torque available from 2,000rpm. This is less than the 160Nm at a higher 2,750rpm of the manual gearbox version. This lower torque allows for smoother six-speed stepped gearshifts from the Xtronic CVT auto transmission. 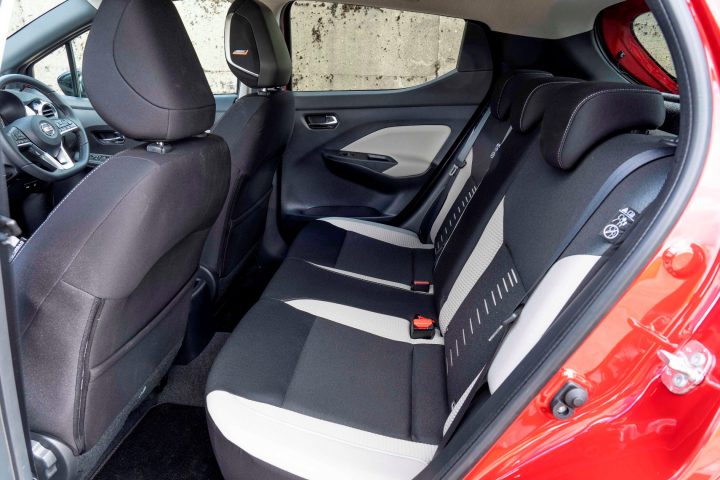 This engine/gearbox combination provides enough performance to cope with motorway journeys without stress but is more lively and perky dealing with cut-and-thrust in-town travel with the auto making driving less stressful. It’s just ‘squeeze the accelerator and go’ making the Micra relatively nimble helped by its well-weighted precise steering.

That said it’s not the quietest or smoothest three-cylinder modern petrol engine on the market today. It has a noticeable off-beat thrum to it on start-up, tickover and at low speeds but once it spins up the revolutions its gets better. 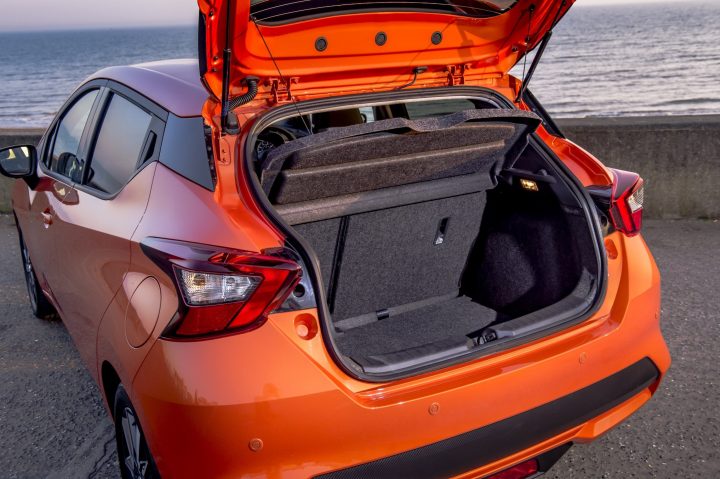 Mid-range acceleration is good but it takes a little longer to reach motorway cruising speeds and accelerating past slow traffic needs a bit more time and space than some of its competitors. Fuel economy is officially 50.4mpg using the new WLTP Combined Cycle figures and my week of motoring, returned 44.6mpg.

The handling is precise and surefooted with the Trace Control providing predictable steering lines during cornering. The ride is on the harsh side with a firm suspension which not only transferred bumps from potholes and road noise into the cabin but the suspension itself appeared noisy. It just doesn’t offer the ride comfort, handling finesse or agility of say the Ford Fiesta which is still the leader for such performance aspects in the supermini sector. 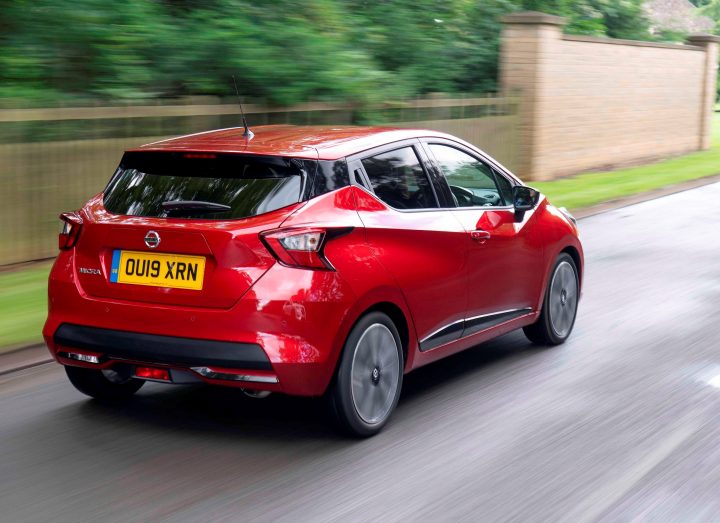 All in all the latest Nissan Micra with its new IG-T100 turbo petrol engine now demands serious consideration in its sales sector, the  engine performance is mostly perky and the styling inside and out is blindingly better.

Against: Expensive £1,250 for a CVT automatic gearbox option, not as good as some of its rivals for ride comfort or rear seat legroom, ungenerous warranty.