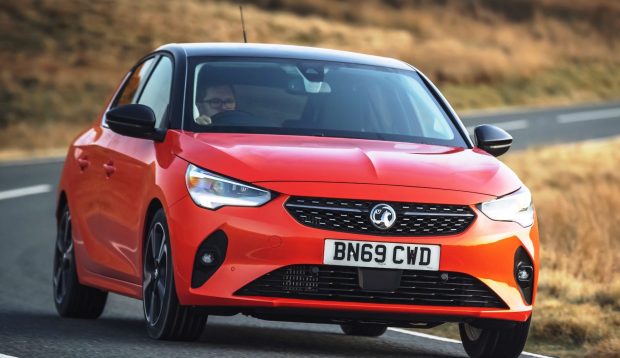 This time around the Corsa is only available as a five-door hatchback and sells in the ‘supermini’ sector of the new car market. The Corsa has been Vauxhall’s best selling range with over 2.1-million sold since it first launched in 1993. European Cora sales since launch are over 13.5-million units.

Always a popular model with UK customers it held the number four sales position in the UK’s top ten sales chart last year with 54,239 registrations. Its main competitor was the long time top ten sales leader – the Ford Fiesta.  Even at the start of this year with the outgoing Corsa on run out it managed to retain its fourth place in the sales chart with the Fiesta again being the sales leader for all new car sales. And there has been a swing in this and other categories by the public moving to chunky but compact SUV styled models such as the Nissan Juke, Skoda Kamiq, Seat Arona, VW T-Cross, Citroen C3 Aircross, Peugeot 2008, Suzuki Vitara and the Vauxhall Mokka X/Crossland X  derivatives.

Other supermini hatchback competitors, and there are  many, include the VW Polo, Renault Clio, Skoda Fabia, Suzuki Swift, Seat Ibiza, MINI 5-Door and even the Audi A1 Sportback. NOW another very significant competitor is the Peugeot 208, just announced as European Car of the Year 2020. Why because the new generation 208 and Vauxhall Corsa now share the same platform, running gear and other components. This move follows the Vauxhall brand’s ownership move into the PSA Group family of brands consisting of Peugeot, Citroen and DS and more recently a partnership with Fiat-Chrysler.

The new Vauxhall Corsa range is extensive. I counted no less than 35 different derivatives with on-the-road prices ranging from £15,750 up to £30,660 with the top price being the 11kW all-electric 136hp version with a driving range of 205-miles, however there is a cheaper 7.7kW model also with 136hp but a shorter driving range, at £30,665.  By comparison the all-new Peugeot 208 5-door range with similar power unit options, prices start from £16,250 and rise to £29,650 for their electric powered version. 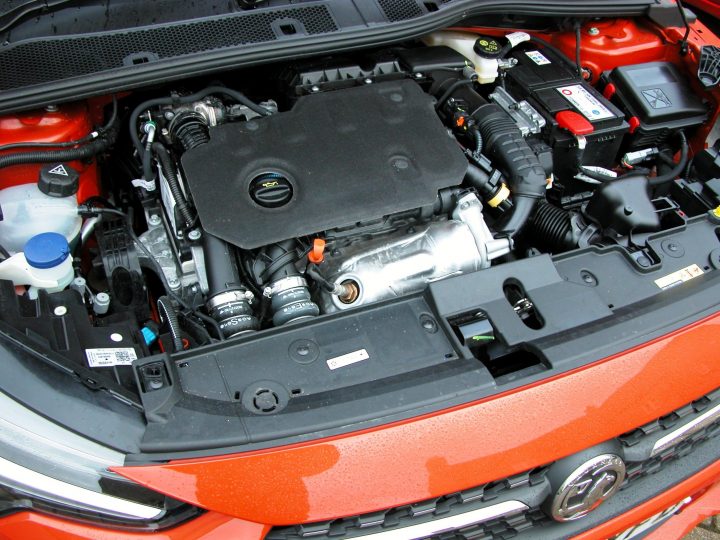 Returning to the Vauxhall Corsa; in addition to the two electric power units conventional engine options in the new range are PSA Group 1.2-litre 75hp normally aspirated petrol, 1.2-litre 100hp turbo petrol and a single turbodiesel 1.5-litre 102hp. All petrol engines are 3-cylinder units and all engines petrol or diesel have CO2 emissions below 100g/km.

As for the two Corsa-e zero emission electric versions have a power output of 136hp and a significant 260Nm of torque with a driving range of up to 205-miles under the new WLTP test regulations. For company car drivers these electric models have zero % BiK company car tax levied on them from 6 April 2020. The BiK new rates for petrol and diesel models range from 23 to 26%.

Vauxhall/Opel says they had actually started development of their new Corsa before the takeover of the brands by the PSA Group in 2017. However it made sense to discard the use of their platform, running gear, suspension and so on to conform with the Peugeot/Citroen new generation models although the body design is more or less the same has they had planned. Now the new fifth generation Corsa uses the PSA Group’s new CMP platform. This is more rigid and lighter and can accommodate a broader range of powertrains. The new Corsa weighs in from just 980kg, up to 108kg less than the outgoing versions whilst retaining similar dimensions to the previous model at 4.06m in length.  Weight loss with the new platform and lighter weight aluminium engines are important functions to achieve the new low CO2 and fuel economy standards set for new models. 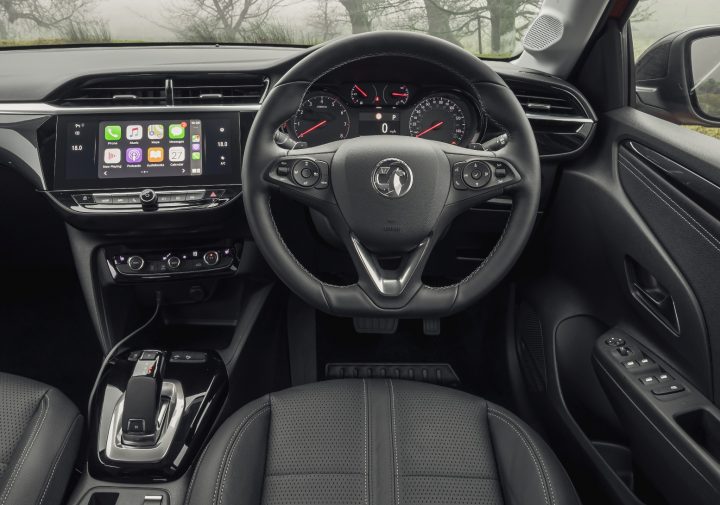 Even the lowest spec SE Corsa model is well equipped and thoroughly up-to-date with the expected infotainment and connectivity functions. I’ll just list a few SE spec items to give you a flavour of what is included. 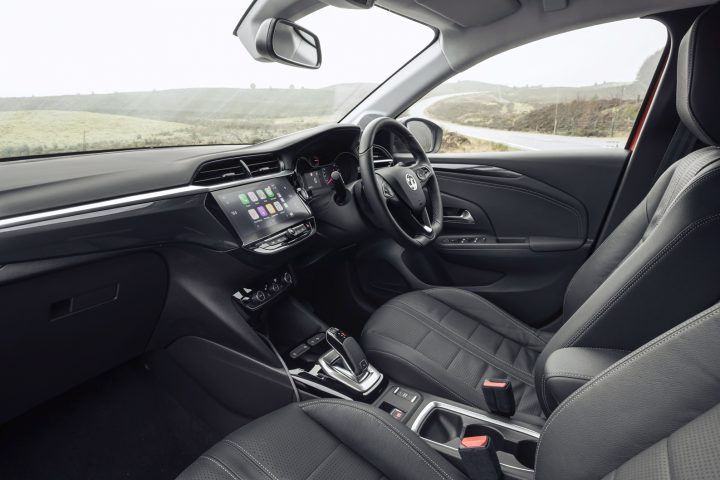 My test drive version was the 1.5 Elite Nav Premium Turbo D with its 102hp turbodiesel engine and 6-speed manual gearbox priced at £21,560. This is £1,210 more expensive than the same spec level but with the 1.2-litre 100hp turbo petrol manual model which is expected to be the best selling engine in the range. The turbodiesel engine I tested of course in this supermini sector will not be that popular except for high mileage customers but it was the only model available at the time to try out the new Corsa.

But popular or not this 1.5-litre, 4-cylinder turbocharged diesel unit with intercooler produces a very healthy, for a car of this size and weight, 250Nm of torque from 1,750rpm.

Now it’s easy to dismiss buying a new diesel car and we know diesel sales now are not very popular. However much miss-information is promoted by the anti-car and anti motoring lobbyists who seem not to acknowledge that overall EU car CO2 emission levels have risen since diesel sales fell out of favour. The fact is this diesel engine uses an emissions reduction system for optimum exhaust after-treatment both for CO2 and NOx reduction.

This system consists of a passive oxidation catalyst/NOx absorber, AdBlue injector, SCR catalyst and Diesel Particulate Filter (DPF) – all grouped together as a compact single unit and fitted as near as possible to the engine.

The NOx absorber acts as a cold start catalyst, reducing NOx emissions at temperatures below the SCR light-off period.

In the longer term both petrol and diesel powered new car sales will be banned but until then we can carry on motoring with either fuel. I take a measured view that the more mpg your modern car achieves the less CO2 per mile is emitted, petrol or diesel.

As for the diesel engine’s performance; fuel efficiency is its strongest point with my week of test driving returning 58.7mpg, not very close to the official 70.6mpg figure but the tax costs are not prohibitive. The acceleration is reasonable, the engine noise relatively low for a diesel and the 6-speed manual gearbox made for relaxed driving on open roads and minimal gearchanges at lower speeds thanks to the ample amount of torque available.  Road noise intrusion was at a reasonable level but wind noise was more noticeable. 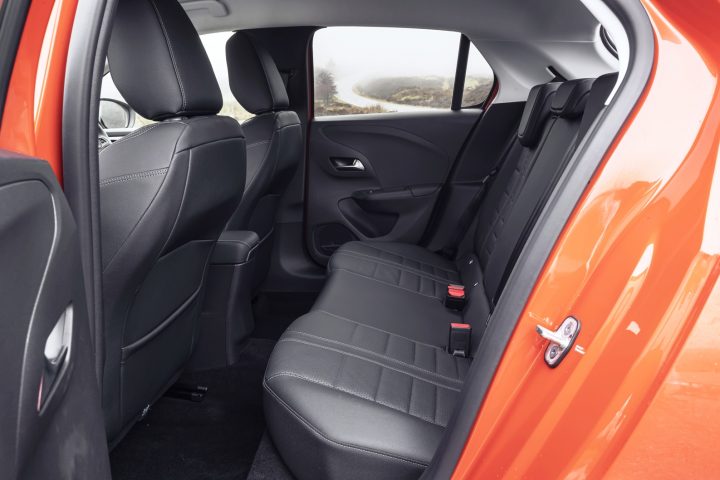 Being wider, lower and longer, the new dimensions give it a more sporty appearance with good proportions and above all it looks smart. Inside the increased dimensions are not obvious, it’s not the roomiest supermini sized car but with 5-doors it is family practical unless you have six-footers using the rear seats.

The rear door openings in particular are quite narrow and the wheelbase is not as long as a VW Polo or Seat Ibiza and cannot match the excellent Skoda Fabia.

From the driving position the seating is lower in the car which gives a better feel to its handling and is good for positioning it on the road with minimal body roll. Overall it felt nimble and agile. The ride was firmer than I expected, not uncomfortable, but not as compliant I gather as the new Peugeot 208 as Vauxhall engineers dictate their own suspension and steering rate settings although both the Corsa and 208 use the same platform and suspension components. The steering is very light and generally offers reliable feedback to the driver. 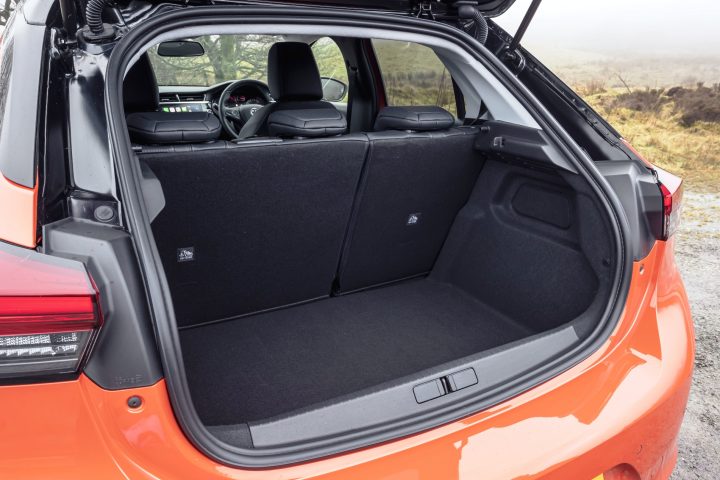 The interior fascia layout is more typical Vauxhall than the contrived PSA design. Yes it has a large easy access touchscreen but you don’t have to delve into the screen to make adjustments to functions such as the heating temperatures and the air-con system. Apple CarPlay and Android Auto are fitted as standard to all models.

Storage is reasonable with door bins, bottle/cup holders in the centre console and a relatively small glovebox. The boot is 24-litres larger than previous Corsa models at 309-litres.

The boot opening is quite narrow as well and heavy items have to be lifted over a high rear sill and down into the boot.  The 60/40 split rear seat backs do fold down to increase the load space to 1,118-litres but other than that the boot is of simple and not that clever design. 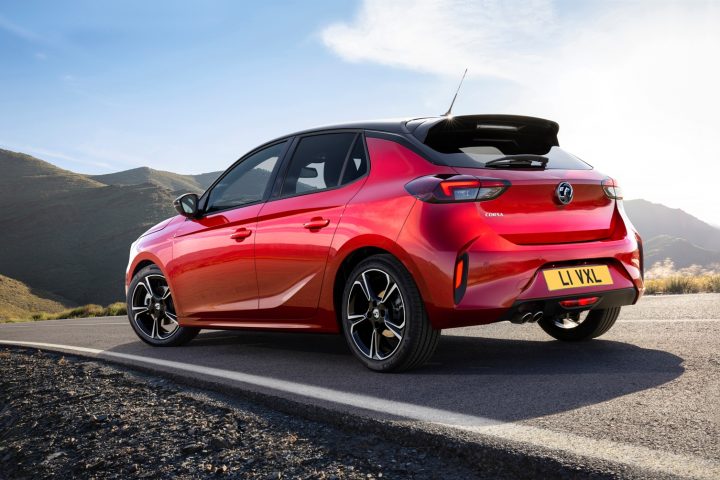 Overall the new Vauxhall Corsa is better in all ways than its predecessors but as a package it’s not the best supermini on sale today and the new Peugeot 208 probably has the edge on it – apart from its higher price.