Back in 2007 the BMW-owned MINI range was expanded with their Clubman estate, their interpretation of the former Austin and Morris Mini Traveller estates.

The main drawback of the BMW’s version of their first MINI Clubman, especially for UK customers, was the fact that it was cramped for rear passenger space, had little boot room and unbelievably it had only one half-sized rear passenger side door on the offside of the car so we Brits had to get out of the rear seats and step into the road instead of the pavement.

Quite a design oversight when you consider the Clubman was, and still is, built in the UK and shows some lack of consideration and sound design by BMW.

Using the new and larger platform for third generation MINI models the Clubman now has four conventional passenger doors but retains the design signature side-hinged barn-style twin boot doors. The new Clubman is substantially larger than its predecessor with seating for five at a pinch, four adults in reality. The boot space has been increased to 360-litres and this rises to 1,250-littes with the rear seats folded. The overall length has gone up to 4,253mm, the width is 1,800mm and the height is 1,441mm so it can still fit into the shrinking in size public car park spaces and a domestic house garage.

At launch the new Clubman has familiar derivatives of Cooper and Cooper S turbo petrol models and Cooper D and Cooper SD turbodiesel versions.   Prices start from £19,995 and will rise to £27,410 for the soon to arrive Cooper SD ALL4. There is the choice of six speed manual and auto transmissions plus a new eight-speed Steptronic auto option which is new to the brand.

There is a high level of standard equipment right across the range including the MINI navigation system, air-con, cruise control, Bluetooth, keyless entry, electric front/rear electric windows, electrically operated door mirrors electric parking brake and electrically adjustable front seats. Every new Clubman model gets the intriguingly named MINI Excitement Package which features a projection of the brand logo on to the ground beneath the driver’s side door mirror when the car is opened and closed, as well as extended interior lighting

The expected best selling versions will be the Cooper 1.5 petrol for retail customers and the Cooper D for fleet and business user-chooser drivers. My test version was the likely most popular, the Cooper Clubman 1.5-litre petrol with a manual gearbox and this costs the current range starter price of £19,995 although with a long listed of must-have goodies the on-the-road price was a massive £27,355. 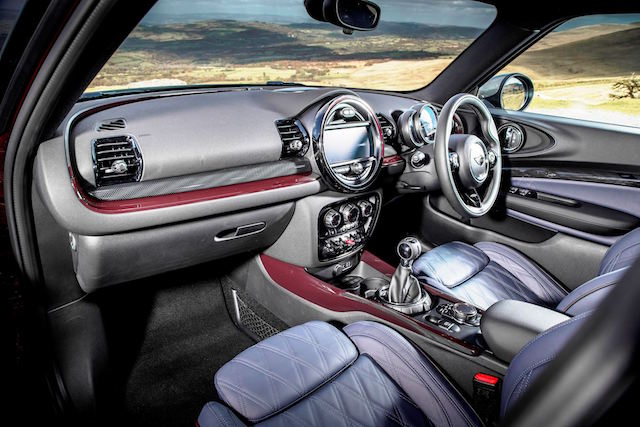 Inside it is pure premium quality MINI with the usual huge centrally position round dial which operates various functions from the sat-nav, radio to the on-board computer. These functions are used via a controller positioned between the front seats in the centre console. The speedometer and rev counter are positioned in the instrument cluster on the steering column as they are with the latest third generation three and five door Hatchbacks.

New customers to the new Clubman will be attracted by the conventional rear side doors so now making it a proper family car, something the original Clubman models from BMC and BMW owned MINI were not.   That function alone should rapidly improve the sales opportunities. Roll in all the other high quality fit and finish of modern MINI’s and the design is a potential winner. The new Clubman is a revolution in its design for a MINI and the interior is an evolution of its premium brand quality continues.

Also a winner is the 1.5-litre, three-cylinder turbocharged petrol engine. This unit is really refined, none of the usual triple cylinder engine growl and to be honest if you didn’t know it had three cylinders you would think it was a four-pot. With 136hp and 220Nm of torque it’s responsive despite the transmissions high gearing. Significant amounts of gearchanges were necessary to drive it in a spritely manner and that wasn’t the best driving experience because I found the manual gearshift to be heavy and not that slick.

On the demerit side the real-life fuel economy during my week long test was 40.8mpg which looks good enough but it was well below the 55.4mpg Combined Cycle figure. My driving included around 300 miles of motorway and dual carriageway use and another 100 miles or so of local driving on B roads and travelling short distances,

Against: Select those extra cost options with care, larger wheels will cost more to buy and they push up the running costs, not a true C-segment hatchback size-wise, heavy gearchange, limited rear/rear quarter visibility, real-life fuel economy was well below the official Combined Cycle figure.