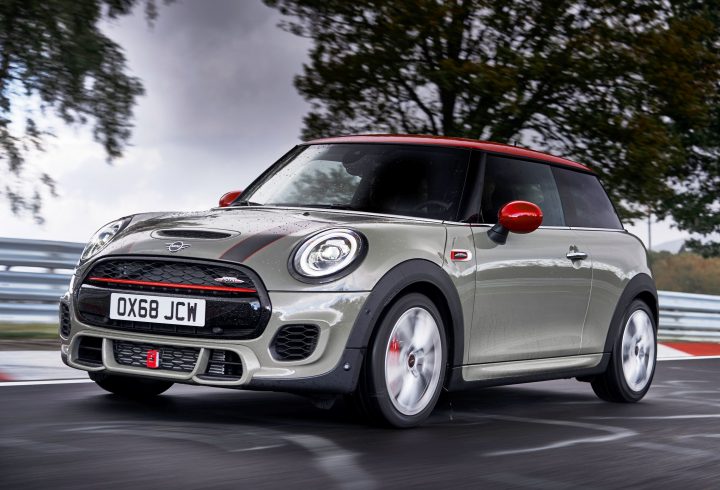 With a 60th anniversary Edition model already scheduled into my forthcoming road test diary I wheeled myself out onto the winding Lambourn area country roads near Newbury for a brief blast in the JCW Hatch.

However the MINI brand doesn’t standstill for long and very recently announced for July ordering are even more powerful JCW versions. These are the Clubman and Countryman versions which use a new 2.0-litre, 4-cylinder 306hp turbo petrol engine but they come as standard with an 8-speed Steptronic auto gearbox and ALL4 all-wheel-drive traction. They are priced at £34,250 and £35,550 respectively.

At the media day, MINI UK spokesperson Helen Wilson said that JCW models account for about 5% of all new MINI UK sales, around 3,000 units a year.  The three-door Hatch is the most popular version followed by the Convertible, Clubman and then the Countryman. MINI sold a total of 67,021 cars in the UK last year, a small 1.68% fall in sales due to the 6.83% drop in the overall UK new cars sales.  For the first six months of this year the MINI brand has sold 33,250 new cars – a fall of 2.56% over the same period last year in a new car market which has fallen by 3.41%. 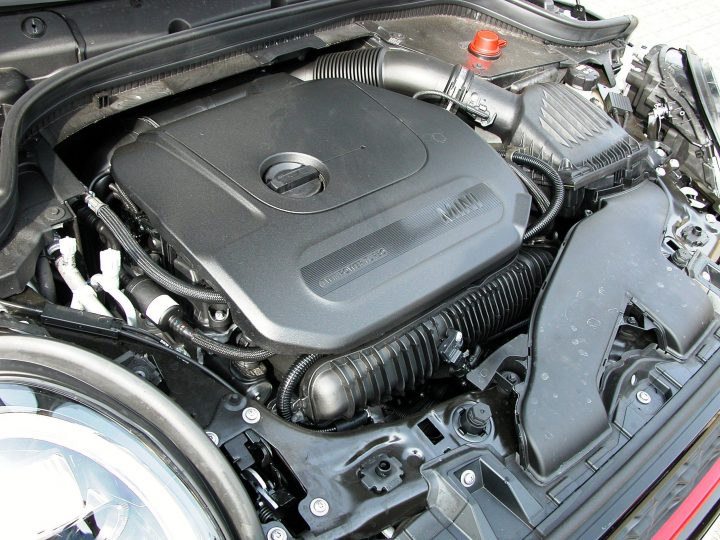 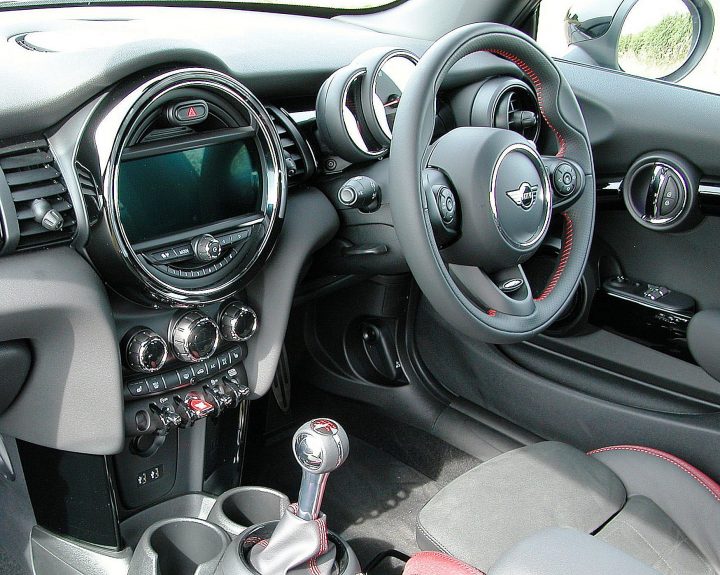 Front electric windows, air con, connectivity, sound system and all the usual high quality fit and finish comes from other lesser performing models as well. However there are still lots of extra cost options that customers can select – but at a price. There were £3,560 worth on my test car, Navigation Plus Pack at £2,000, Comfort Pack at £900, Adaptive Suspension at £600 and a mere £60 for a first aid kit and warning triangle.

As with every MINI Hatch and Convertible model on sale in the UK, JCW models also have standard-fit front and rear LED lights, automatic headlights with rain sensors, MINI Excitement Pack including ambient interior lighting, exterior MINI Logo projection and much more.

Like all revised MINI petrol engines the revised JCW 2.0-litre turbo petrol engine is equipped with a petrol particulate filter which is integrated into the standard sports exhaust system, ensuring both models enjoy a characteristic sound inside and outside the vehicle whilst meeting the strict Euro 6.2d C and D-TEMP emission standards. MINI say the introduction of the latest pollutant reduction technology does not adversely affect the fuel economy or CO2 emissions of these models.

The JCW Hatch 6-speed manual gearbox version I had a brief test drive in last week not only produces a very healthy and refined power output of 231hp but importantly 320Nm of torque through a wide powerband from 1,450 to 4,800rpm.

Top speed is an impressive but not legally usable, unless it’s for a track day experience, of 153mph with the zero to 62mph acceleration time of 6.3-seconds which is far more important for cut-and-thrust road use especially overtaking slower traffic in the shortest possible distance and time.

The manual gearchange was on the heavy side and perhaps not as notch-free as it should be but the ratios were well suited for the engine power and torque outputs.

The official new WLTP Combined Cycle fuel consumption figure was 38.7 to 40.4mpg and on my short test drive around the winding Lambourn Valley roads near Newbury the real-life figure was 33.5mpg.

The all important CO2 figure is 162g/km so First Year VED road tax costs £530 followed by the Standard rate of £145. The BiK company car tax rate is a high 36% and insurance is Group 29E which given the performance and price is acceptable.

My brief reunion with a MINI JCW model showed a further refinement in most every direction. It has more specification, it has certainly moved even more up-market as the ultimate MINI to have, the instrument layout is typical new generation MINI oozing in high quality materials and on this front it is another gradual move away from being what a hard-core compact street racer was. 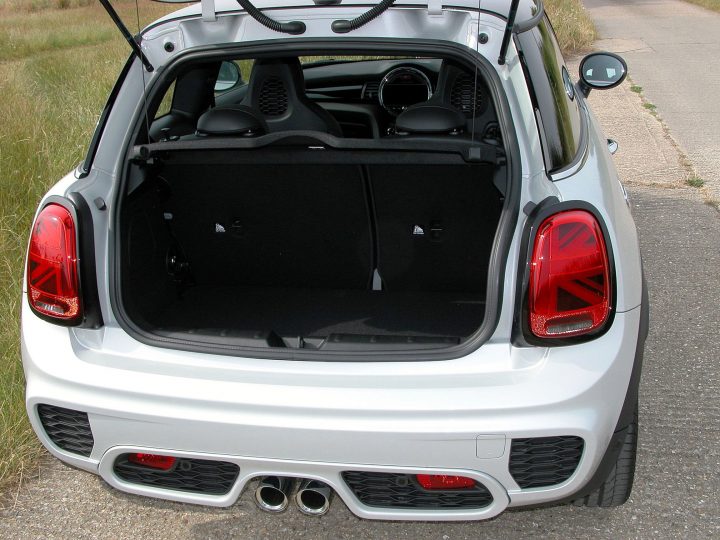 The increased refinement is further evident in the overall handling and significantly improved ride quality. Now some potential owners will miss the needle sharp agility, the hectic pitch and yaw handling from the lightweight feeling previous generation versions.

This new model is far more refined, yes it’s just as fast, just as responsive with copious amounts of mid-range ‘grunt’ but it is all delivered in a more sophisticated way. 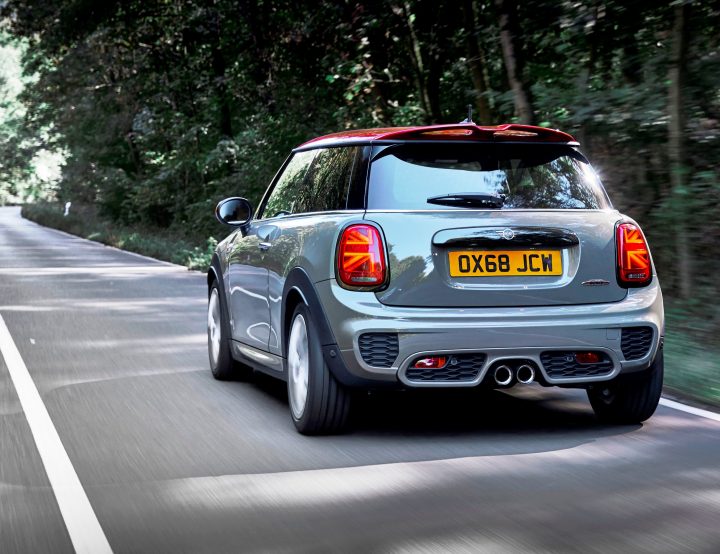 It seems a very grown-up model to be carrying the John Cooper Works badge, what it’s lost in its edginess it’s gained in sophistication, specification and price.

It might now be just too sophisticated for hard-core sports hatch drivers.

Against: Not as ‘raw’ as an out-and-out hot-hatch track day street racer as before, heavy/notchy gearchange, small boot, no 5-Door JCW Hatch model, a top spec Cooper S Hatch looks better value for not a lot less performance.