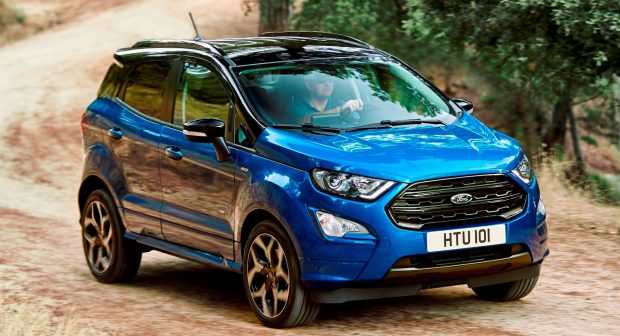 The latest Ford EcoSport compact SUV is the best yet after a troubled start in 2014, but it’s still behind rivals, says David Miles

Under Ford’s then current ‘One Ford’ global vehicle policy, to meet the demand for SUVs, which started in 2010 and has grown rampantly since then, Ford brought their Brazilian designed chunky looking EcoSport to the UK and Europe in 2014.

Poor European sales due to unrefined handling, skimpy interior space and poor build quality resulted in revisions in 2015. And it has been thrown another lifeline now to help it take on the firmly established class leaders such as the Nissan Juke, Peugeot 2008, Renault Capture, Fiat 500X . What’s more it now has to compete against newer rivals such as the Hyundai Kona, Kia Stonic, Vauxhall Mokka/Crossland X, Skoda Karoq and SEAT Arona.

The EcoSport joins Ford’s other SUVs, the mid-sized Kuga and the larger Edge and this line-up will be extended with an even smaller Crossover/SUV model at the end of this year still based on the Fiesta. 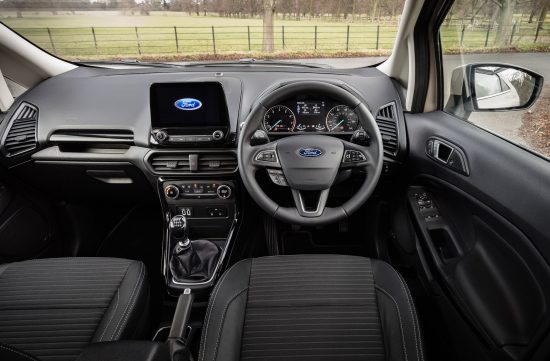 For the 2018 model year EcoSport Ford has transferred production to Romania to meet the expected growth in sales from European markets. It is still based on the Fiesta platform but Ford claim over 2,300 changed components are included in the latest versions.

Styling wise the latest EcoSport looks far more polished and attractive and the larger front grille, reminiscent of that used for the Kuga and Edge models, gives it a purposeful face.

There is the usual rising waistline but at the rear is still its old fashioned side hinged rear tailgate giving access to a relatively small boot space of 356-litres.  This capacity grows up to 1,238-litres with the rear seats folded but it’s by no means class-leading.

The original models were criticised for using this side hinged tailgate door because it was heavy with the spare wheel attached to its outside and opening it wide enough to load bags could be difficult if other cars were parked close behind it. The solution about weight has been to get rid of the spare wheel, now you only get an inflation kit, but there is the option of a spare wheel for the base Zetec spec because the Titanium and ST-Line versions have a rear view camera so a wheel cannot be fitted to the door and there isn’t space under the load floor. 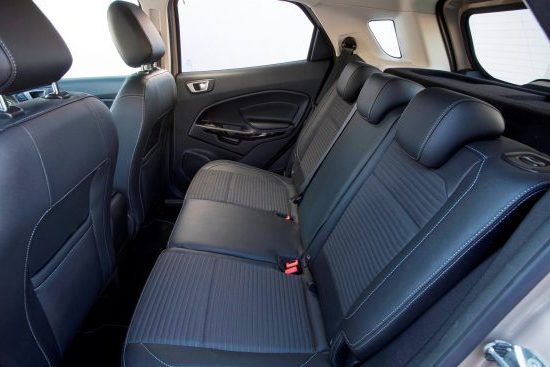 EcoSport still comes up short for interior space in this sector and  the elevated ride height and narrow width causes body roll during cornering due to the high centre of gravity. Revised suspension and steering settings have improved handling but it’s difficult to comprehend that many of the components and platform come from the best handling supermini on sale today, the agile Ford Fiesta.

Where there has been a greater improvement thanks to Fiesta is the interior layout especially the dashboard and controls and the overall improvement in the quality of the materials used and their fitment. Personalisation options and connectivity functions are the latest improvements with Ford’s new generation Sync 3 connectivity system, a floating central touchscreen up to 8.0-inches, cruise control with adjustable speed limiter and rear view camera all being added to the vehicle depending on the grade chosen.

The spec levels are Zetec, Titanium and the new sporty ST-Line addition.   To be added to the range this year will be a new 1.5-litre EcoBlue turbodiesel engine with 125hp which is combined with all wheel drive, the first time 4WD has been available in the EcoSport line-up. 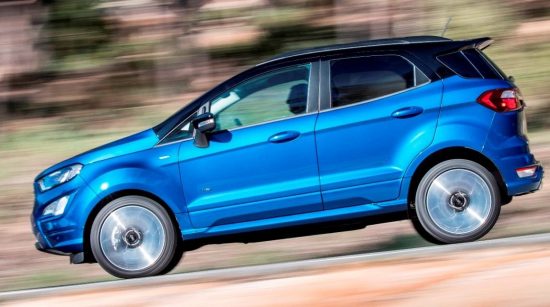 My test EcoSport version was the current best selling Titanium 1.0 Ecoboost 125hp, six-speed manual model with front wheel drive priced at £19,495. However it came with personalisation options such as the £725 Ruby Red exterior paintwork, 18-inch alloys at £400, Blind Spot Information System at £350, front parking sensors at £125, CD player at £125 and the Titanium Lux Pack consisting of Ebony leather seat upholstery, HID headlights and heated front seats at £800 making a total of £22,020.

The 1.0-litre, three-cylinder turbo petrol EcoBoost engine we know well from other models in Ford’s range and it’s always enjoyable with its throaty engine tone and responsive performance. Its party-piece is producing 170Nm of torque from 1,400rpm so it’s responsive for acceleration, smooth at low speeds and with enough power to cruise at higher speeds.

It officially, in this model, will return 54.3mpg in the Combined Cycle but in real-life motoring conditions fitted into the heavier 1,280kg EcoSport, the engine never really sparkled for acceleration, it felt flat and going up steep hills required changing to a lower gear to keep up momentum. 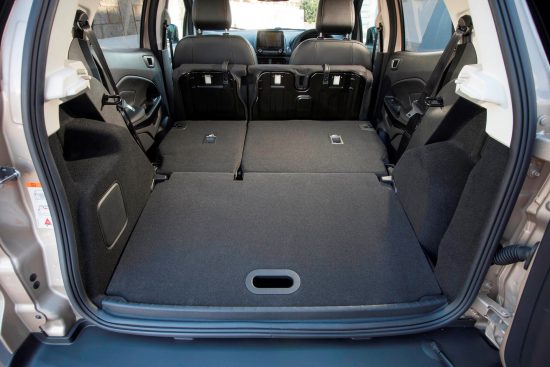 The real life fuel economy varied during my week of motoring. Driving locally it showed around 45mpg on the computer but a 100-mile motorway journey heading into strong wind knocked 10mpg off that. Returning home with the wind behind the vehicle it got back up to 42mpg.

So as usual with these three-pot engines if you work them hard the fuel economy goes away sharply.  Where the EcoBoost engine with its torque availability from low rpm did excel was when the recent snow came. I was wondering how many people who had bought a new compact SUV with price-saving 2WD were sat looking at the recent weather, or worst stuck in the snow, thinking I should have spent more and got a 4WD version.

In reality, the EcoSport with 2WD manfully performed really well with me adopting the low revs high gear philosophy of motoring in snow. It coped brilliantly and it was comparatively easy to potter along at 1,000rpm in second or third gear through the snow with the front wheels not spinning and providing secure traction.  Of course it will not get the vehicle out of very deep snow or mud, we have to wait for the arrival of the new 4WD EcoSport for that. 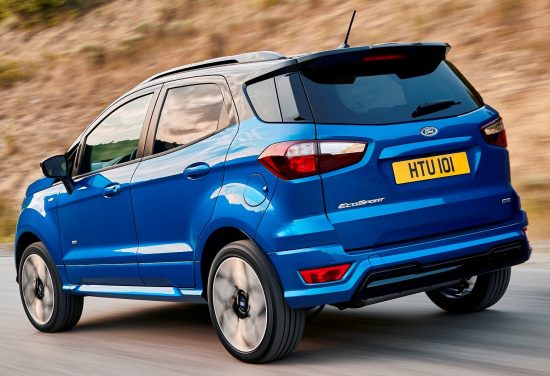 In short the new 2018 Ford EcoSport compact SUV is better but the market sector has moved on and it’s not the best of its type.