The newcomer has much in common with the brand’s new 1 Series family five door Hatchback using the same front wheel drive platform, although there is an xDrive version.  Its main competitor will be the Mercedes CLA series which adopts a coupe design from their A-Class family cars.

The engine and spec levels mirror those of the new 1 Series Hatchback and are Sport and M Sport specification plus the M235i xDrive model. The Sport model comes with standard features including 17-inch alloy wheels, front and rear Park Distance Control, two-zone automatic air-con, BMW Connected Package Plus, BMW Live Cockpit Plus and Active Guard Plus with Lane Departure Warning. 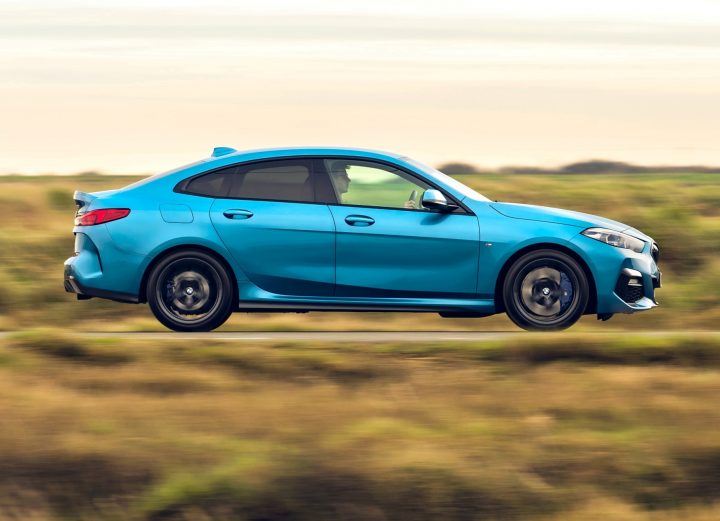 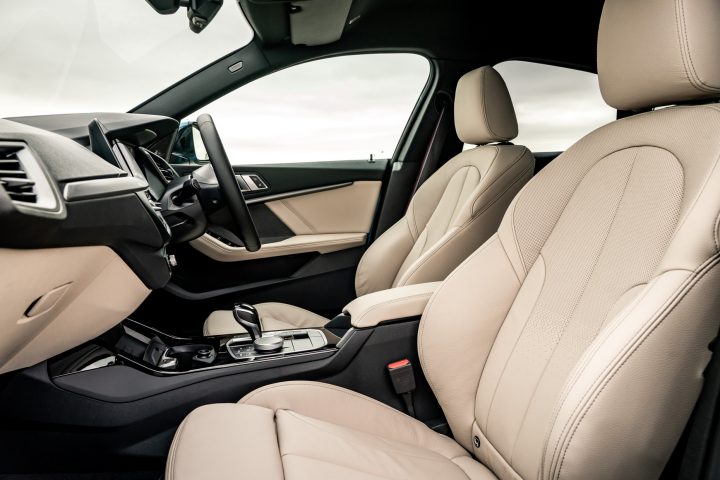 The newcomer, like the new 1 Series, benefits from an array of driver assistance systems known from BMW models higher up the range. Standard equipment includes collision and pedestrian warning with city braking function. Lane Departure Warning with active lane return is also standard, as is Cruise Control with braking function.

The reversing assistant from other recent BMW models helps the driver to exit parking spots or manoeuvre when space is limited. The new BMW 2 Series Gran Coupe allows drivers to use a variety of operating methods, depending on the situation and personal preferences via buttons on the centre console and steering wheel.

The BMW Live Cockpit Plus is standard even on Sport models and includes features such as a Touch Controller, navigation system, two USB ports for data transfer and a WiFi interface. The 8.8-inch control display features a touchscreen, whilst the instrument cluster in front of the driver has a 5.1-inch colour display.

Apple CarPlay reparation is standard on all models and is included for one year from build, and then renewable via the BMW ConnectedDrive portal thereafter with one year, three year or lifetime subscriptions available. Android Auto connectivity becomes available from July. The BMW Live Cockpit Professional is standard on M Sport and M235i models. This includes a fully digital, customisable instrument display behind the steering wheel with a screen size of 10.25 inches, coupled with a 10.25-inch Central Information Display.

Like the 1 Series Hatchback the new 2 Series Gran Coupe might be compact but its big on specification as standard or as an option but the more you add to the equipment the more you pay. 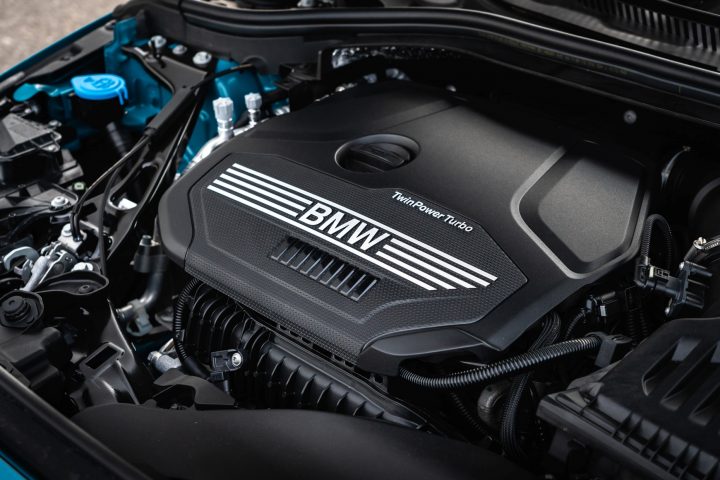 But for some, in addition to the appeal of the elegant four door coupe styling, what’s under the bonnet also counts. The 1.5-litre three-cylinder petrol engine for the entry level 218i has technological changes which have reduced CO2 emissions by 29g/km over the previous engine, while boosting maximum power output by 4hp to 140hp.

It generates peak torque of 220Nm, with an overboost function which briefly generates an extra 10Nm in fourth gear or higher. The BMW 218i accelerates from zero to 62mph in 8.7 seconds and can reach a top speed of 134mph. With a manual gearbox it will return 45.6 – 47.1mpg under the new WLTP regulations with CO2 emissions under the soon to be ended NEDC measuring system of 114 to 123g/km.

The new 2.0-litre petrol unit under the bonnet of the M235i xDrive is BMW’s most powerful four-cylinder engine delivering a maximum output of 306hp with the help of BMW TwinPower Turbo technology. Peak torque is 450Nm, which helps it to achieve the benchmark zero to 62mph sprint in 4.9 seconds, while top speed is limited to 155mph. The M235i returns 36.2-37.2mpg with CO2 emissions of 153g/km.

I’ve had the opportunity to drive what is expected to be the best selling version – the BMW 2 Series Gran Coupe 218i M Sport. With the optional dual-clutch £1,350 automatic transmission this version has an on-the-road price of £29,665. But the vehicle was fitted with numerous other showcased options so the test car’s actual price was £33,635.

The newcomer looks an elegant cruiser with huge kerb appeal but when you step inside the first impression is that it is equally driver focussed with its cockpit design mirroring that of the new 1 Series Hatchback. All the controls fall to hand and the displays are within the driver’s eyesight.   A look behind the sports front seats and there is about the same legroom as the 1 Series Hatchbacks so it’s not plentiful but potentially enough for a young family. It’s only adult six-footers who will find the coupe roofline restrictive for headroom.

The next most noticeable feature once on the road was the more compliant ride than I recently experienced with the same specced 118i Hatchback. The ride was comfortable seemingly without losing any of its taught handling and precise body control, ideal for a long-legged stylish cruiser even though our test drive was on winding Cotswold country roads. Top speed is 134mph and the zero to 62mph acceleration time is 8.7-seconds.

The 1.5-litre, 3-cylinder 140hp, 220Nm turbo petrol engine matched with the auto gearbox proved lively but the test drive real-life fuel economy proved disappointing at 32.2mpg given the official new WLTP figures are 42.2 to 44.8mpg for the auto model.  The new CO2 emission levels are also worrying. Currently they are a NEDC rated 114g/km but from April this year under the new and more accurate WLTP system these go up to 146g/km which increase tax costs. 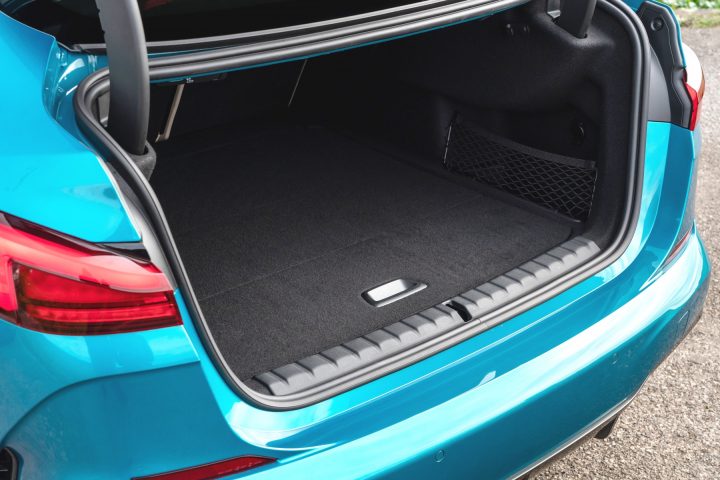 As no diesel powered model was at the media launch I had time to fit in a brief dash up the road in the ‘halo hot-shot’ M235i xDrive Gran Coupe version which will only appeal to hard-core petrol-heads although its aggressive sports styling will be visually enjoyed by a larger audience.

The 2.0-litre, 4-cylinder twin turbo 306hp, 450Nm petrol engine is awesome in this model thanks to its power to weight ratio and fully justifies having xDrive all wheel drive traction to keep it under control. Priced at £37,255 this is a lot of car for a lot of money and by adding a few options the test car’s price was £42,280.

The huge power and massive torque coupled to the standard fit revised 8-speed auto gearbox and xDrive traction make it a real cut and thrust performance driving machine but with a much firmer ride than the 118i model. There are of course various driving modes to tailor the car’s performance to meet the driver’s needs. Top speed is limited to 155mph and the zero to 62mph acceleration time is 4.9-seconds so that easily sums up this model’s performance potential. In reality this engine/transmission/drivetrain is more suited to the new 1 Series M135i xDrive Hatchback rather than this new and very elegant 2 Series Gran Coupe which is very much a ‘grand’ to look at but compact tourer in size.

The Official new WLTP fuel economy figs are 36.2 to 37.2mpg and on out brief test driving on winding Cotswold roads returned just 24.8mpg.  The outgoing NEDC CO2 figure is 153g/km but under the new WLTP system operating from April these go up to 177g/km so running costs and tax implications are significant, and it falls into Group 36 for insurance. 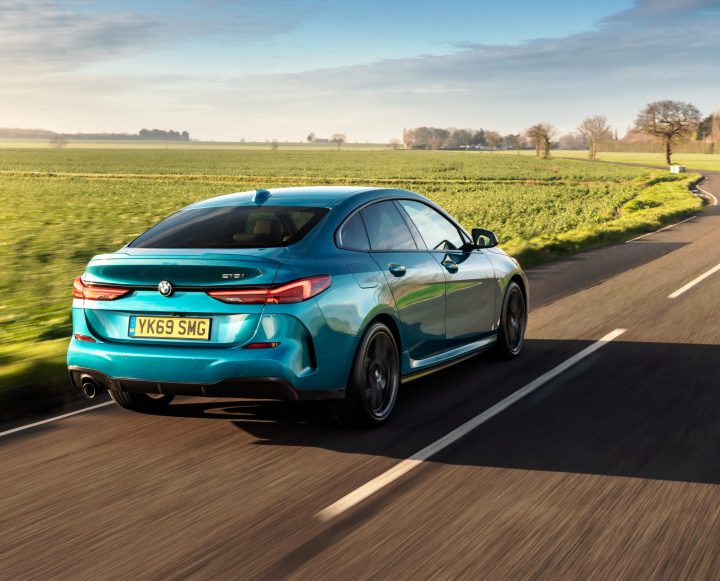 Overall the new 2 Series Gran Coupe might be a niche model range within the very extensive BMW model line-up but for some customers niche will be nice.