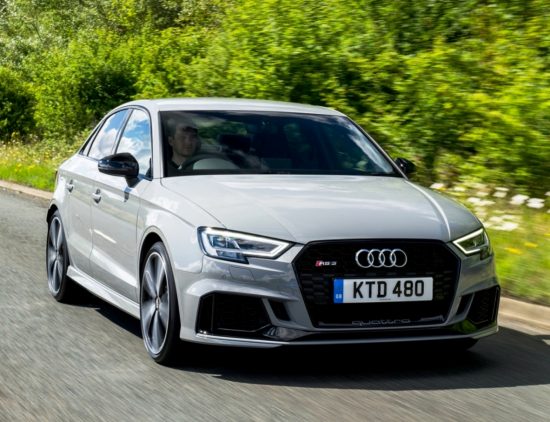 As I sat in yet another stationary long line of traffic I wondered just how useful or practical was the 174mph Audi RS 3 Saloon.

Official figures recently released by the Department of Transport show UK drivers faced on average a delay of 46-seconds for every mile they travelled on A-roads.

With a record number of 37.3-million vehicles on our roads we motorists have travelled a total of 324-billion miles across gridlocked Britain in a year. A high proportion of the increased traffic says the report has come from increased delivery van use fed by the boom in internet shopping and it only got worse as we headed closer to Christmas but increased traffic congestion is now a year round occurrence we have to live with.

I can vouch for those depressing figures because a busy week of driving to and from various new model press car launches I covered 600 miles, mainly motorways or major A-roads and dual carriageways. In desperation to find some clear roads I was forced to take to A-class winding country routes so the overall average speed for the week was just 37mph, depressing but at least it helped the fuel economy with a figure of 33.4mpg, more or less the same as the official Combined Cycle figure.

My new test drive Audi RS 3 four door Saloon costs £45,250 on-the-road but loaded with extra cost options the test car’s price was £59,475.The RS 3 is also available in the five door Sportback hatchback body style at £44,300 plus options and first UK deliveries started in September. Given we spend a lot of time going nowhere on our congested roads is that money well spent?

Whilst the pleasure of driving has diminished, for more than a few of us motoring in a performance premium brand car still has its appeal. There is no logic to it – just freedom of choice which in these heavily taxed and legislated days we can still enjoy and appreciate. 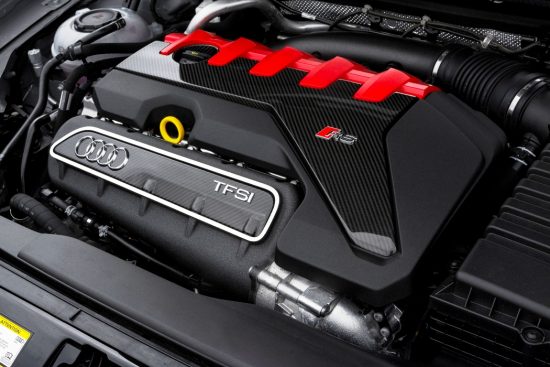 The first Audi RS 3 in Sportback form was launched in 2011 with a 335bhp turbo petrol engine and four years later this power output went up to 362bhp. Now Audi have pushed that power output up to 395bhp or as we now call it 400hp.

It supplies a huge 480Nm of torque from 1,700rpm right through to 5,850rpm and the driver can adjust through the Drive Select function the gear shift points and the proportion of torque directed to the rear wheels which can be up to 100%.

The RS 3 as a Saloon was introduced in September as a completely new model and at the same time as the latest version of the longer serving RS 3 Sportback body style.

In two months of UK sales the two versions achieved nearly half the total RS 3 sales of 2016, 178 units for the Saloon and 420 for the Sportback. Audi UK expect the two new RS 3 models to achieve around 1,300 sales between them in 2018.

The RS 3s, products from Audi Sport, use a lightweight engine five cylinder 2.5-litre TFSI aluminium turbocharged petrol unit with a manganese oil sump. This turbo engine is effectively half Audi’s V10 engine from the R8 so its performance pedigree is assured. Officially top speed is restricted to 155mph but for an extra £1,600 you can order the derestricted option and the zero to 62mph accelerated time is 4.1-seconds. Drive is through a dual-clutch seven-speed automatic gearbox with sequential changes and paddle shift levers and of course it has quattro all wheel drive as standard.

At the front of the RS 3 is a single frame honeycomb grille flanked by standard LED headlights, or matrix LED headlights which are part of the £895 option pack which also includes LED rear lights and dynamic front and rear indicators. There is quattro badging on the lower under bumper spoiler.

At the side is a four door coupe style roofline and deep side skirts amplifying the lowered sports suspension. At the rear are an integrated boot lip spoiler and a rear under bumper diffuser flanked by the two exhaust tailpipes. My test car had the huge megaphone style large diameter RS sports exhaust system which costs a £1,000 but sounds superb, although be warned it will wake your neighbours on an early morning cold start-up.

Whilst writing about options the test car also had the £4,695 ceramic brakes, hugely priced but hugely impressive although during my test driving they didn’t show their worth due to the stop/start driving conditions. 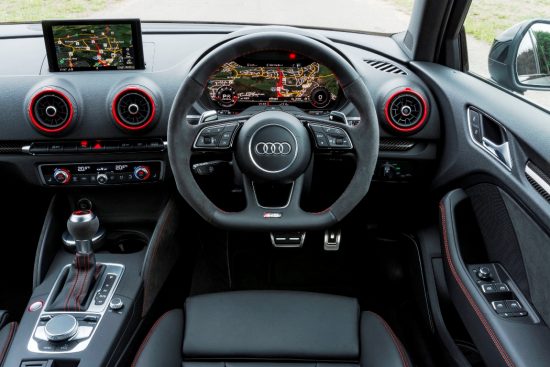 Inside its another classy fully digital Audi Virtual Cockpit although the 7.0-inch colour monitor that slides into place on start-up is looking somewhat small and old-fashioned but the 12.3-inch high resolution display which takes over the instrument binnacle in front of the driver is a joy to use.

That’s especially when relying on sat-nav instructions as I tried to circumnavigate my way around traffic hold-ups which the prompt MMI system did very well.

Justifying the cost and performance of the RS 3 Saloon whilst trundling along is a hard job but with its driving refinement, connectivity functions, top quality upholstery and comfortable sports seats it made long hours behind the wheel seem short, too short in fact because despite the price it’s probably the most impressive and pleasing car I’ve driven all year.

So what is it like to drive? The really good thing is that despite its undoubted performance and huge power it is just as happy in docile mode. Because of the driving conditions I selected Comfort mode in the Drive Select system, but there are others to choose from including Individual where you choose what you require depending on how your mood is at any given time. 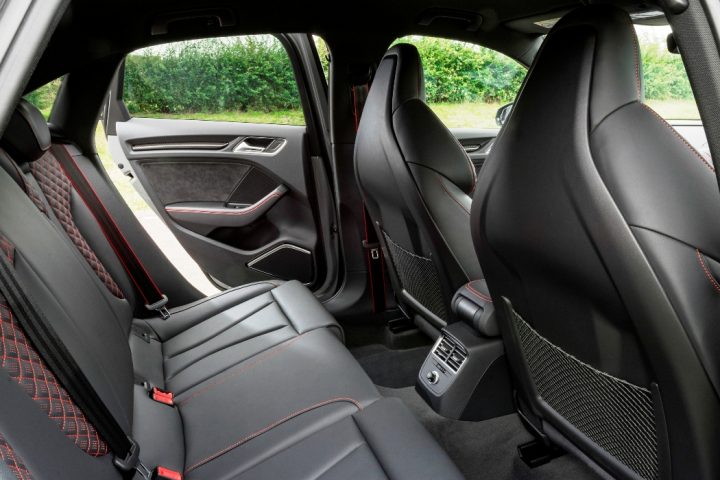 It is the huge amount of torque available through a very wide powerband that makes this 2.5-litre turbo engine so responsive when needed yet docile when travelling at stop-start or low speeds. The acceleration is immense with its two-phase fuel injection and the engine just goes on ‘giving’ to almost infinity and beyond, certainly beyond the legal limits.

It’s all very well having that amount of power but the slick auto twin-clutch gearbox with well spaced ratios and quattro all-wheel drive are perfect bed-fellows.

The front end cornering grip at high speeds is phenomenal and the optional 8.5J front wheels help with that. The quattro all wheel drive system allowed the rear wheels to accurately follow the line of the front wheels through corners and then powering out the torque drive shifts to the rear wheels to push the car along rapidly. The torque vectoring system also distributes more torque drive to the outside wheels during cornering for added handling balance.

As for ride comfort there are selectable options but other than to try the different modes I left it in Comfort for most of the time and even if the roads had been clearer of traffic I doubt I would have changed that. The only advantage going to a more ‘Dynamic’ mode was to sharpen the steering response but that’s being really ‘picky’. 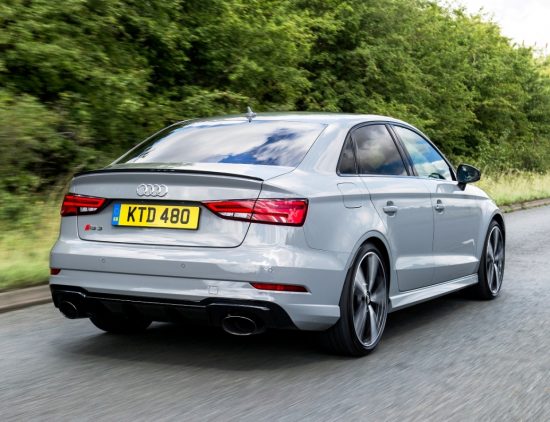 I know this very high performance mid-sized expensive Saloon isn’t going to be bought by the motoring masses but for those that are in the market for such a machine you won’t be disappointed. It’s the car I didn’t want to hand back after my week of motoring even after traffic conditions were against me.

Insurance Group: 46E    Warranty: 2-years unlimited mileage and up to 60,000-miles in the third year

Against: High costs especially if options are added, 8.5J wheel optional upgrade pushes the RS 3 Saloon into a much higher VED tax band.