You are here: Home / Featured / Slick speedy Seb slips into seat with seconds to spare 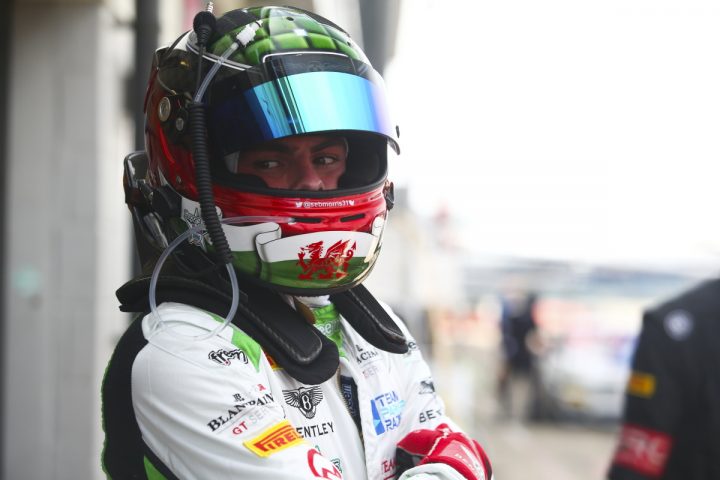 Ultra-quick endurance racer Seb Morris made a dramatic, and very unexpected, eleventh hour return to the British GT Championship at Silverstone Grand Prix Circuit on Sunday where the reigning champion reunited with Rick Parfitt Jnr in the category’s biggest race of the year.

With Parfitt Jnr’s regular 2018 team-mate Ryan Ratcliffe sidelined by food poisoning and being prevented from racing by doctors mere hours before the race, 22-year-old MSA Team UK driver and BRDC Superstar Morris was the recipient of a surprising late-morning phone call asking him to pack his crash helmet and race suit.

The reunited ‘dream team’ did actually take the chequered flag in an incredible fourth place, but an unfortunate penalty for a ‘yellow flag’ infringement dropped the duo back to a nonetheless strong sixth. Morris’ performance was nothing short of exceptional.

“Well that was an unexpected Sunday!”, explained super-sub Morris, “I got a call from Rick’s wife Rachel after I’d just finished a run in my local park, it was a nice chilled-out Sunday, and she said ‘we need you at Silverstone, Ryan’s unwell and we need you to drive’.

“Luckily I had a clear journey, I got to the track and changed into my race suit in the car park, signed-on in the garage with the scrutineer and by the time I was buckling-up my crash helmet Rick was coming into the pits for the first stop! I jumped in, using Rick’s seat, and I was only 0.3 seconds off the pace on my first lap out and ended with the fourth best average stint time.”

Morris added: “I’m really happy with the performance I gave and I hope it’s shown manufacturers like Bentley the job I can do, I was up to speed on my out lap without any time in the car and that’s the sort of thing this job entails sometimes for professional drivers.”

Parfitt Jnr took the first stint of the three-hour race from 14th on the grid and made good progress into ninth until an unfortunate spin after contact with a Lamborghini dropped him to the tail of GT3. Battling back strongly, he then handed the Bentley over to Morris with around an hour of the race complete – literally minutes after the Blancpain Endurance Cup front-runner had arrived.

Morris immediately impressed by getting up to speed on his out lap and he charged through the order with sensational pace. Running through the driver cycles very smoothly, after another stint for Parfitt Jnr in the Bentley Morris took the long final stint and finished the three-hour contest little more than 10 seconds shy of the podium in fourth – prior to the two place post-race penalty.

“The penalty was unfortunate, the team usually tell me where yellow flags are coming up on a lap and you can react but it wasn’t relayed to me”, explained Morris, “It was at Abbey where the flags are about 150 metres away from the track, and you’re doing 140mph through there, so it’s pretty impossible to see them without warning.

“Overall, though, everyone did a brilliant job and the guys in the team put a great car together. It’s nice for Rick too to show how competitive he is, with a few things going our way we really could have won that race.”

Next up for Morris, not accounting for any further last-minute call-ups, is the Total 24 Hours of Spa in Belgium, round four of the Blancpain Endurance Cup season, over the weekend 28 and 29 July.