You are here: Home / Featured / Service with a smile & luxury break at Celtic Mitsubishi 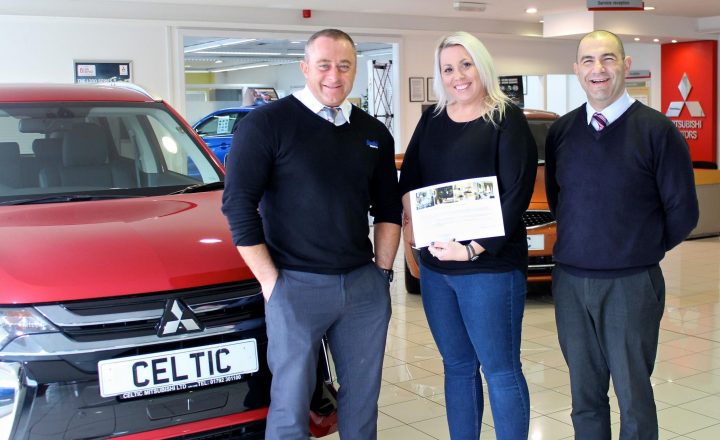 A lucky winner has scooped a luxury break for two thanks to Celtic Mitsubishi in Swansea.

Jay Crouch, from Swansea, scooped the prize, which includes dinner, wine and spa treatments, after entering into a prize draw for having her Mitsubishi Outlander serviced at the dealership in Victoria Road, Gorseinon.

The 31-year-old is now planning a romantic weekend away next Valentine’s Day with her husband Mark.

Jay, who works for the local housing association, said, “I was really surprised when they told me I had won because I never win anything. The people at Celtic Mitsubishi are second to none. I always recommend people to come here and to win this is just amazing.”

Jay’s family have been loyal customers of Celtic Mitsubishi over the years. Her Outlander is her fifth Mitsubishi from the dealership while her husband, a mechanical engineer, is on his second Mitsubishi L200 pick-up. Jay’s dad and sister also drive Mitsubishi Outlanders. Jay’s entry was selected at random from Mitsubishi dealerships all over the UK.

Jay is also an ambassador for Dementia UK and Celtic Mitsubishi has supported a number of her fundraising events in the past.

Tony Sciascia, dealer principal of Celtic Mitsubishi, added, “I am delighted Jay’s name was picked out. It couldn’t have been a better to person to win it because she really is a loyal customer. Her family have become good friends of the business over the years so it’s brilliant to see them win this fantastic prize.”

The couple can pick their destination from a choice of hotels all over the UK. Celtic Mitsubishi is now offering customers the chance to win £1,000 in Marks and Spencer vouchers. Anyone who has a service or repair work on their vehicle up to and including 31 December, can be entered into a draw for the vouchers, which can be exchanged at Marks and Spencer branches.