You are here: Home / Motorsport / Seb has Silverstone GP meeting in sight 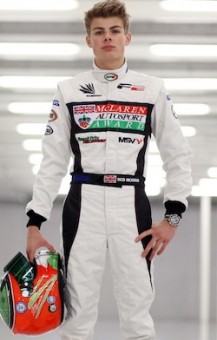 Rising Welsh racing star Seb Morris is competing in the supporting race to the British Grand Prix this weekend.

He’s determined to build on the superb top five performance he delivered during the previous event in Austria just over a week ago.

Securing his first points in the prestigious FIA Formula One World Championship support category during round four, thanks to an exceptional drive through the order from 19th on the grid to fifth, the MSA Team UK and FIA Institute Young Driver Excellence Academy racer is determined to use the performance as a springboard to greater success with Status Grand Prix on home soil at Silverstone.

Rocketing up the championship table into 11th position last time out, the Marford 19-year-old is in buoyant mood ahead of Silverstone and is relishing the prospect of competing on ‘home’ soil again at a venue where he has enjoyed great success in the past.

Winning on the Grand Prix track last year in the Formula Renault 2.0 Northern European Cup (NEC), in 2013 Seb took an excellent podium hat-trick at the Northamptonshire venue in the BRDC Formula 4 Championship. During his debut season in single-seaters a year earlier, he was a double winner in Formula Renault BARC on Silverstone’s shorter National Circuit.

“It’s going to be enjoyable being back at Silverstone, it’s obviously my home race and the home race for the team as well so, hopefully, it’ll be a good weekend”, said the Serge DeNimes and Oxford Vaughan ambassador, “I know how fast I can be at Silverstone, I’ve won there several times over the years and knowing the track will be a little bit of an advantage.