You are here: Home / First Drives / Renault fight back with latest Megane series 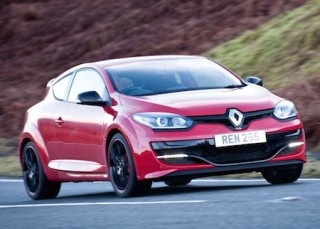 Arriving in time for the new ‘14’ registration plate month of March are the face-lifted and revised range of Renault Megane five door Hatch, the three door Coupe and the five door Sports Tourer.

Excluding the Renaultsport Coupe there are four trim levels on offer –  Expression+, Knight Edition, Dynamique TomTom and GT-Line TomTom. In common with industry practise for personalisation there are seven option packs also available depending on the model chosen.

Right at the top of the range is the highly rated Renaultsport 265 three door Coupe with its 265hp turbocharged petrol engine costing £26,925. The much admired lower spec level but sharper handling performance ‘Cup’ version of this model, which cost £24,500, has been deleted. But instead the higher equipment level Renaultsport 265 can still be bought but with a Cup Chassis Pack option costing an extra £1,350 so the price has gone up to £28,275.

The last generation Megane range was launched in 2009 and it is not due to be replaced until 2016 said Yann Le-Graet, Megane product manager who attended this week’s UK media test drive events.

He said, “With the latest changes to the 2014 range we aim for the Megane to maintain its position in the C-segment as it is one of the oldest model ranges. We have already seen the introduction of the new Golf and SEAT Leon, a new Ford Focus is on its way, the Astra is also due to be replaced and of course we have the popular Kia C’eed and Hyundai i30 models to compete against as well. We aim to maintain the Megane range’s UK sales level of around 8,000 units this year helped by our customer finance offers and price reductions.

With around 75 to 80% of retail customers buying a new car with a PCP finance plan Renault is offering the Megane Hatch from £159 per month, the Sport Tourer from £179 a month and the Coupe from £199 a month all over a four year repayment period.”

He said, “The Hatch versions take 55% of Megane UK sales, the Sport Tourer 25% and the Coupe 20%. The ‘halo’ Renaultsport Coupe takes 10% of Coupe sales – around 200 units of which 40% will be with the Cup specification. Overall 35% of all Megane UK sales go to retail customers, the remainder to fleet and business user-chooser customers.

With rationalisation of the Renault range over and the worst of the recession behind the UK’s new car market, the dwindling sales of new Renault cars in this country has been halted and in 2013 their UK sales increased by 14% to 46,173 units.

I briefly had a test drive in the best selling Megane model, the Hatch Dynamique TomTom Energy 1.5 dCi 110hp with Start & Stop and a six-speed manual gearbox. Even though the price is lower by £1,200 than outgoing versions it makes this latest generation Megane look expensive at £19,245 in a segment of the market where run-out models and even new models are being heavily discounted to maintain market share.

However you do get a lot of equipment for your money ranging from the usual electrically operated windows and door mirrors to cruise control, air conditioning, Bluetooth, trip computer TomTom sat-nav and automatic lights and wipers to name just a few items.

All 2014 Meganes now have a face-lift with a more prominent Renault logo at the front, new bumper, sculptured bonnet and vent grilles, elliptical headlights and daytime running lights. 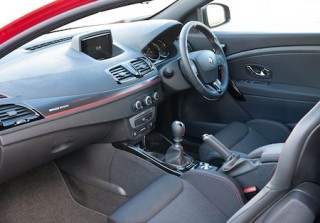 Inside there is a general smartening up of fixtures and fittings but there is still a considerable amount of controls and switches to familiarise yourself with. The ride, being a Renault family hatch, is comfortable but in this day-and-age the Hatch feels cramped for space compared to the roomier new competition in this sector. The rear seat leg and headroom is limited compared to the new VW Golf for instance or the SEAT Leon and even the older Ford Focus appears roomier.

The latest Renault 1.5-litre dCi direct common rail turbodiesel engine with 110hp and 260Nm (192 lb ft) from 1,750rpm is however first rate and of course well known in other Renault and Nissan models.

With its six-speed gearbox it is easy to drive, it’s responsive, quiet and potentially it will offer good fuel economy with low emissions. Officially it will return 80.7mpg in the Combined Cycle which in real-life is hugely optimistic and my short drive on very wet roads saw only 39mpg recorded but 50mpg should be assumed as around the average figure. The CO2 figure is only 90g/km so you will not be paying any VED road tax and company car drivers will pay 14% in Benefit-in-Kind tax from this April. Insurance is rated at Group 17E.  This model might be costly to buy but it’s relatively cheap to run.

I also had a brief run-out in the star of the Megane family range, the Renaultsport 265 with its three door coupe body and 2.0-litre, four cylinder turbocharged 265hp petrol engine and six-speed manual gearbox.  Priced at £26,925 this158mph icon is mostly regarded as the best handling C-segment ‘hot hatch’ on the market, especially the previous Cup version. Now the Cup model has gone and it’s replaced by a £1,350 Cup Chassis Pack option which has pushed the price up to £28,275. This is not good news for those customers who valued a performance chassis over lots of extra on-board fixtures and fittings.

The Cup Chassis Pack consists of 18-inch alloy wheels, limited slip differential, red brake callipers, grooved brake discs, stiffer springs, dampers and anti-toll bar.  This is a sports coupe which offers no driving compromises, you just want to drive it fast, it thrives on it but thankfully given our poor weather, appalling road surfaces and congested traffic it can still cope with mundane driving without throwing a tantrum.

The power delivery is strong and linear with 266lb ft of torque from 3,000rppm distributed through a close-ratio six-speed gearbox to a torque splitting limited slip differential and drive to the front wheels. Even the soaking wet road surfaces on my test drive didn’t increase torque steer and traction ‘off-the-line’ was impressive. The zero to 62mph is six seconds on its way to a top speed of 158mph. 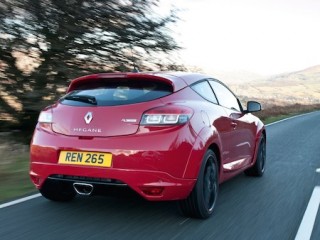 Officially the Megane Renaultsport 265 will return 37.7mpg in the Combined Cycle but 29mpg on my brief but enthusiastic test drive. Emission of course are relatively high at 174g/km so road tax is £285 for the First Year rate reducing to £200 for Year Two onwards and company car driver (no chance) would pay 27% Benefit-in-Kind tax from April onwards.  Insurance is high as well at Group 36E but then it costs to have fun.

The specification is high ranging from TomTom stat-nav to auto lights/wipers, air con and so on and of course Renaultsport trim and instrument detailing. The steering is firm even though it is electric variable rate but it gave really positive feedback allowing precise cornering and given the wet roads communicated really well with me – the driver.  The handling is flat and level, firm of course but not bone-jarringly so.  It still is the best handling C-segment ‘hot hatch’ by far, it’s just a shame the Cup spec is an option rather than a more affordable lesser spec model in its own right.

Against: A pity the lesser cost Cup specific version has been deleted from the Megane Renaultsport line-up although there is still the option of the extra cost Cup Chassis Pack which makes the model less of a bargain.