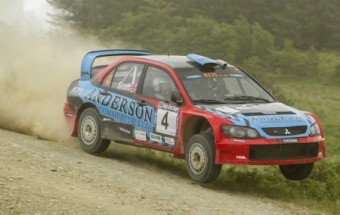 With two rounds of the Pirelli MSA Welsh Forest Rally Championship remaining the battle for honours is closer than ever following a thrilling Nicky Grist Stages, writes Peter Hughes.

For maximum points winner on the Royal Welsh Showground based event, Jamie Anderson, the excitement began even before the event started when he blew a centre diff on his Mitsubishi Evo 5 World Rally Car during Friday testing.

The crew worked around the clock to ready the car for the Saturday morning rally start and Jamie, from Ellistown, and co-driver Jon Scott, from Ludlow, rewarded them (above) with sixth place overall and top championship contenders, taking two fastest stage times along the way on the eight stage event.

Malvern driver Bob Ceen and co-driver Andy Bull, from Birmingham, overcame spinning their Impreza World Rally Car on one of the narrower section of the route to take second place and move Bob within three points of championship leader Paul Davy. Once competitors begin dropping their worst scores as the championship regulations permit, Bob would look to be in the stronger positio 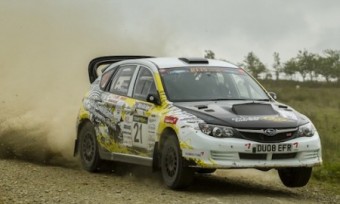 Dylan Davies from Llanon continues to leave his 18-month sabbatical from the sport behind him as he and co-driver Llion Williams of Caernarfon claimed another championship podium place to keep them in contention for end of season honours.

Unfortunately, another front-running crew, Luke Francis of Abergele and Colwyn Bay co-driver John H Roberts, were unable to ready their Mitsubishi in time for the event.

Worcester pairing Paul Davy and Roger Allan finished fourth among the championship contenders after battling for Group N honours for most of the event with Roland Llewellin from Haverfordwest, co-driven by Wrexham’s Jamie Edwards.

The battle ended when Llewellin and Edwards left the road on the penultimate stage. Edwards reported afterwards that both crew and car were OK but it would take ‘a long rope’ to recover their Mitsubishi Lancer Evo 9.

Davy and Allan were still unable to relax, however, ultimately finishing just six second ahead of the Subaru Impreza of fellow championship contender, Wug Utting, from Surrey, co-driven by Bob Stokoe.

The see-saw battle for the Junior driver category, open to competitors under 25, continues. This time it was the turn of VW Polo driver Morgan Handford from Pontyclun to reclaim the lead from Llanwrda’s Meirion Evans.

Paul Davy retains the lead in the Ravenol Welsh Challenge ahead of John Baker and Dylan Davies.

The crews have a short break now before the penultimate round of the rally, the Eventsigns Woodpecker Rally which takes place on 5 September. With competitors able to drop their two lowest points scores of the season there remains everything to play for as far as both overall and class honours are concerned on the two remaining events.