You are here: Home / Motorsport / Pembrey thriller on the cards this weekend 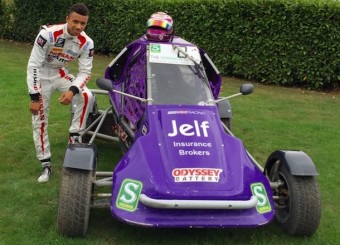 The stars will be out at Pembrey on Sunday as a Welsh Le Mans star and a World Rally Championship contender join the regular competitors for round 6 of the British Rallycross Championship.

Jann Mardenborough, from Cardiff, got his break in motorsport by winning the GT Academy, which sees computer gamers compete for an opportunity to become real-life race drivers. He has gone on to establish himself as one of the world’s leading sports car drivers, racing for Nissan, as well as competing in the GP3 single seater series, a stepping stone to Formula One.

With a rare free weekend in his diary he has decided to try his hand at Rallycross, competing in the RX150 category. With competitors all driving identical single seater buggies powered by 1000cc Honda motorcycle engines the emphasis is on driver ability. Despite Jann’s lack of experience of racing on the mixed tarmac and gravel surface that is characteristic of Rallycross, Championship co-ordinator, and top Rallycross driver, Ollie O’Donovan is tipping him for a podium place on Sunday, 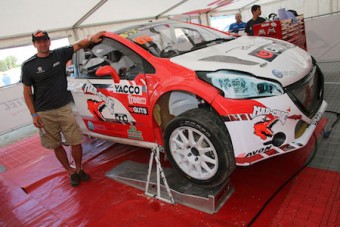 Meanwhile, Finnish rally star and World Rallycross Championship contender Kristian Sohlberg will also be among the stellar line-up. The flying Finn previously enjoyed a successful rallying career driving for the Mitsubishi works team and finishing runner up in the 2002 Production World Rally Championship.

Now he is following in the footsteps of former World Rally Champion Petter Solberg and making the switch to Rallycross.

His visit to Pembrey will see him behind the wheel of one of Albatec Racing’s two litre Peugeot 208 supercars. Producing an estimated 600 horsepower, the purpose built saloon car is capable of accelerating from 0 to 60 mph quicker than a Formula One car.

The MSA British Rallycross Championship with the Shannon Group will travel to the challenging Pembrey Circuit for the second time this season.

In Ireland last time out, the resurgent British Rallycross Championship produced some thrilling battles across every class.

There is little doubt that the mantle will be picked up at Pembrey in round six of the championship this weekend.

Following the trip across the Irish Sea, reigning champion Julian Godfrey leads the way in the MSA Supercar contest after edging ahead of World Rallycross wildcard Andy Scott, who had a torrid time by his impeccably high standards.

Scott will be looking to reclaim supremacy before he leaves Wales and at Pembrey he will add further artillery to the Albatec Racing armoury.

Former Mitsubishi works driver and World Rally star Kristian Sohlberg will gain his first taste of British Rallycross as he gets to grips with his Peugeot 208 ahead of European outings later this year.

After claiming his first win of the season in his new Ford Fiesta, series sponsor Ollie O’Donovan is back in the title hunt and will be eager to add to his victory tally at the Carmarthenshire venue this weekend.

In the bumper MSA SuperNational field, the season-long ding-dong duel between Daniel Rooke (Citroën AX) and Allan Tapscott (Vauxhall Corsa) is set to enter another chapter at Pembrey while Gareth Wood (Ford Ka) and Paige Bellerby (Lotus Exige) sit in third and fourth respectively and continue to rein in the duo in front. One driver who will be looking for the support of the home crowd is Haverfordwest’s Mike Howlin (Ford Fiesta), who will hope to use local knowledge to climb the table from his current seventh place.

Craig Lomax is the runaway leader in the Super 1600 category in his ‘pocket rocket’ Citroën C2, while Tristan Ovenden remains on top in Suzuki Swifts with Darren Scott, Jack Brown and Rob Maynard in hot pursuit.

And if those series are not enough, the British Rallycross Championship round at Pembrey will be topped off with Hot Hatch / BMW Minis, Swift Juniors, single-make RX150 Buggies and the always entertaining Retro Rallycross legends. All will do battle on the gravel and asphalt of the Llanelli venue.

Practice will get underway at 9:00 on Sunday morning with the first of the heats at 10:15. Admission is £12 for adults with accompanied children aged 14 and under admitted free.