Garry Pearson is the 2021 Motorsport UK Pirelli Welsh National Rally champion after a stunning fightback on the final two stages of Saturday’s Rallynuts Stages Rally saw him clinch the title by the smallest of margins and winning on a tiebreak.

Co-driven by Niall Burns (below left), Garry lost 17 seconds on the opening stage through Myherin when the power steering failed on his Pirelli-shod Asset Alliance Škoda Fabia R5. A nut on the top of the reserve reservoir had come loose which had also caused the windscreen to mist up. 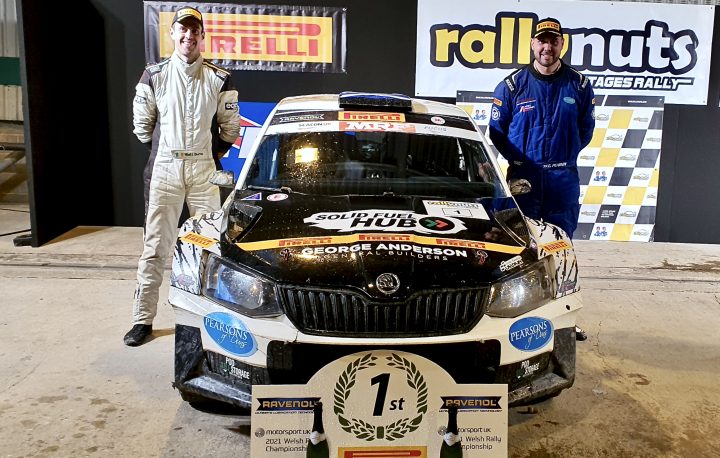 The title looked his, until a right rear puncture halfway through the repeat of Myherin cost Garry almost a minute.

Now 45 seconds behind Callum and 27 seconds behind Ian, Garry needed to finish second to win the Welsh title and with just 13.47 stage miles remaining he launched an incredible fightback.

Garry set the fastest time on SS5 (Sweet Lamb 2) taking 17 seconds out of Ian to set up a thrilling final run through Hafren 2.

In a title or nothing final stage charge, Garry was then 12 seconds faster than Ian to overtake him on the event leaderboard and take second place Pirelli Welsh Championship points by just two seconds – which with Callum taking a maximum score was what Garry needed to be crowned 2021 champion.

It was also cause for celebration for the 2018 Pirelli Welsh driver champion Dylan Davies, who owns, prepares and runs Garry’s 2021 title winning Fabia R5.

“It’s been one of my most challenging days of my rallying career, from the power steering problem in the morning, driving half of stage four on a puncture and then a fightback on the last two stages in the afternoon,” said Garry.

“I took it one event at a time and it’s the best year I’ve ever had in rallying. I’m speechless.

“Credit to Dylan Davies Rallying because they’ve prepared a good car for us all season. And thanks to Asset Alliance, Pirelli, George Anderson Builders and all the people in the team for pulling together and getting us here.”

Paul Street/Ian Jones were confirmed as Pirelli Welsh Historic Cup champions after a great season in their Escort RS1800 Mk2.