Automotive suppliers have become significantly more optimistic with their outlook on 2021, with 38% of surveyed suppliers showing positive forecasts compared to just 8% six months ago.

Yet, 31% of respondents still hold a notably negative view, a much higher share than in pre-Corona times. This follows from the latest CLEPA Pulse Check survey on business sentiment in the sector, held late February into early March.

The majority outlook is robust in response to the much faster than expected rebound of the global automotive market, with four out of five suppliers expecting to increase order volumes in the next 12 months. Profitability is foreseen to stabilise further, with numbers above 5% in reach for over four out of ten respondents again.

“Sentiment is improving despite the continued concern on the impact of the pandemic and the current difficulties with deliveries of semiconductors and other critical materials, like steel and plastics, and constraints in transport and logistics capacity, all of which do have a dampening effect”, said Sigrid de Vries, CLEPA Secretary General. 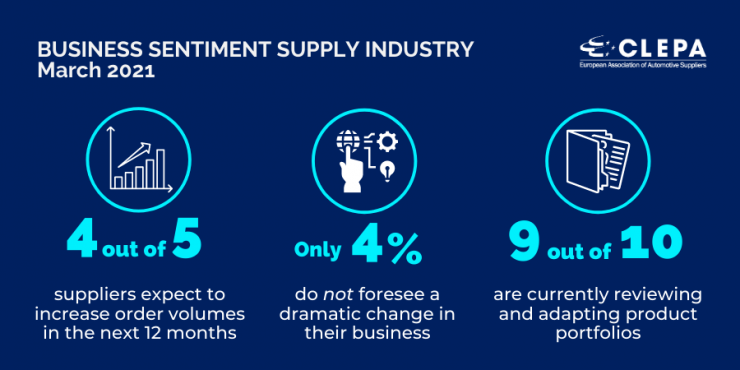 Over 60% of respondents in fact indicate to be impacted by these difficulties, resulting in delayed or interrupted production. Respondents acknowledged that the semiconductor crisis has unveiled flaws in the just-in-time supply chain management. This has been compounded by low upfront chip commitment, and competing with strong demand in consumer electronics and a saturated capacity with base-chip manufacturers.

Short-term recovery is not expected before at least another 3 months, and concerns are raised about the traditionally strong consumer demand  in the third and fourth quarters ahead of Christmas shopping. De Vries: “Suppliers and OEMs must work to increase their visibility on demand along the whole chain and leverage the rapidly growing automotive demand toward other sectors.”